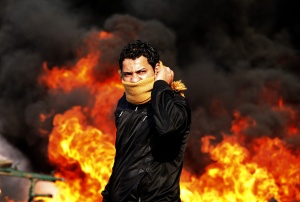 Underlying the uprising in and the ongoing massive agitation in is the rise of the Islamic middle class who quite rightly object to having their aspirations throttled by authoritarian corruption and economic monopolies.  Such was the self emulating martyr in who was no illiterate peasant but was a well educated young man and the pride of a well to do family who sacrificed to see him into university.

They can go on the internet and see free peoples at work everywhere improving their lives under governments that have slowly learned to just get out of the way.  It is only amazing that it took this long to get up their courage to hit the bricks.

This is a true revolt against tyranny.  The middle class is not been advanced in these countries and they will try a new political system to get it all to work.

At the same time, the lesson of in which one secular tyranny was replaced by a Islamic tyranny has not been lost either.  The Army everywhere will oppose such and the democratic process is likely to actually suppress the likes of the Muslim brotherhood. It will still be nervous times.

Whatever the outcome, all governments in the Islamic world have been put on notice that they must provide freedom for the middle class to breath and contribute to the political life of their countries.

None of this has anything to do with radical Islam although they will struggle to take advantage of it just as the communists used to do in days of yore.  In , Mubarak did the obvious and rounded up all the Muslim Brothers leadership and put them in jail to wait out the revolt.  Unfortunately, they were all since sprung and the prison was also emptied.

To really ride out the revolt he would have to establish a transition electoral program to divert the energy into electing a representative government.  Doing that has been problematic because autocrats never see their way to provide a truly workable constitution and the result is usually deeply flawed. Recall ’s constitution which still keeps real power away from the elected representatives long after the original group of thugs went to their graves.

Ideally, Mubarak and the army can be the midwife to a constitutional assembly whose first order of business is to provide a constitution.   That way the army and Mubarak can be the guarantors of a successful transition and the block to the rise of specific factions undemocratic in their objectives such as the Muslim Brotherhood.  Of course the problem in is that the army has been both undemocratic in its inclinations and a sponsor of the worst radicalism.  Thus such a role must be transitional.

Far more importantly, the genie is out of the bottle.  Whatever the actual outcome, the middle class has discovered it has the power to challenge the autocrat and demand representative government through the modern ability to communicate with cell phones and twitter. Governments can stall but they cannot control the dialogue at all.

We now live in a world in which those secret bribes paid to your bros’ secret bank account can become known to all your fellow citizens.

The only solution for the autocrats is to implement representative government as quickly as possible.  Otherwise, mob rule will challenge them constantly.

(Reuters) - 's decision on Sunday to close the offices of Al Jazeera illustrates the leading role the Arabic broadcaster has taken in reporting unprecedented popular revolts against Arab rulers.

has often harassed the Qatar-based channel since it began in 1996, setting off a revolution in Arab media in the face of state-controlled information, but it had never before tried to shut down its operations completely.

But the channel led the coverage of a Tunisian uprising when it began in late December and toppled Zine al-Abidine Ben Ali on January 14, even though it was already banned from the North African country.

Then, sensing that 's example would set off copycat movements elsewhere, the channel charted mobilisation in that led to huge protests in the past week demanding the end of President Hosni Mubarak's rule.

"Al Jazeera saw the gravity of the situation," said Shadi Hamid of the Brookings Institute in , referring to the two revolts. "They saw it was going to be big before other people did and that it would stand as one of the historic moments in Arab history."

Arab governments have often closed the offices of the channel, which helped put tiny Gulf state on the map and boosted its status as a leader of regional diplomacy.

A major oil and gas power, employs vast resources to back the channel. This month it began a stack of secret documents revealing embarrassing Palestinian Authority concessions to in peace talks. Emad Gad of the Al Ahram Strategic and Political Studies Centre said the effort to smother Al Jazeera was the last effort of a dying authoritarian system to control events in the traditional heavy-handed manner.

He cited the government's move to completely shut off the Internet and mobile phone lines on Friday in an effort to stop people gathering.

"Is cutting the Internet or the mobile network in 2011 a solution? This is equivalent to that. It's the behaviour of a dictatorial state breathing its last," Gad said.

Social media and mobile phone technology have also been cited as playing a major role in the street mobilisations of the past month, which touched and too.

STATE TV TRIES TO HIT BACK

Having ignored the protests for five days, Egyptian state TV has now focussed on the disorder that erupted after state security forces withdrew from the streets on Friday rather than ongoing protests against Mubarak.

On Sunday state TV -- which like other Arab official outlets has tried to modernise to keep up with the Qatari trend-setter -- sniped against the station saying only a handful of protesters were in central , "in contrast to the tens of thousands Al Jazeera talked about."

But Al Jazeera carried images from a still camera of crowds gathering throughout the day at . The station also has a live channel whose transmission tried to block on its Nilesat satellite last week.

"We should have taken steps before with this channel since it has caused more destruction than for ," governor of Minya province, Ahmed Diaeddin, raged on state TV. "I call for the trial of Al Jazeera correspondents as traitors."

"It's managers think they are creating a revolution, first in Tunisia, now in ," he said.

As'ad AbuKhalil, a politics professor in the , wrote on his popular blogsite Egyptian and Saudi media were both trying discredit the protest movement.
Posted by arclein at 12:01 AM