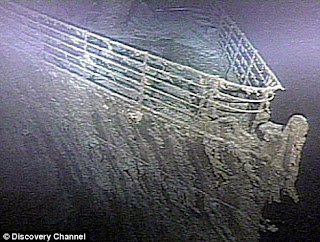 The swiftness of the actual dissolution of the Titanic is very surprising and this report states that it will be a done deal in most of our lifetimes.  Needless to say, all the iron that sank throughout the twentieth century will experience the same fate.

Even on land, buried iron has a similar lifespan.  I have dug up metal posts decades old and they crumpled in my hands.  It takes unusual conditions to preserve iron from the effects of bacteria.

At least this will give us a real time line for all sunken vessels that is reliable.  We are at the century mark for the Titanic and a mere twenty or so years will largely finish it off, plausibly leaving a few heavy parts a few additional decades.

First it was an iceberg, now it's bacteria: Rust-eating species 'will destroy wreck of Titanic within 20 years'

The wreck of the Titanic will be nothing more than a rust stain on the bed of the within 15 to 20 years, scientists warned today.

A newly-discovered species of rust-eating bacteria is slowly consuming the 50,000 tons of iron that makes up the sunken liner.

Experts now believe the invasive group of micro-organisms will eventually cause the shipwreck to completely decompose.

Disintegrating: A newly-discovered species of rust-eating bacteria will have consumed the Titanic on the bed of the within 20 years

Identified using DNA technology, the bacteria and has been found on clumps of rust - known as rusticles - that have covered Titanic's iron hull in the century since it sunk in 1912.

The bacteria - Halomonas titanicae - is said to be fast consuming the rust and the iron.

Consequently, scientists believe the wreck - that is in two separate sections - will be nothing more that a huge 'rust stain' on the seabed within 20 years.

HISTORY OF THE TITANIC

Dubbed the 'unsinkable' ship, the Titanic famously struck an iceberg and sank in under three hours on April 15, 1912, killing more than 1,500 passengers and crew.

It lay unseen on the ocean floor for decades, until 1985, when an American-French expedition identified its final resting place 329 miles south-east of .
The wreck, which was split into two sections 2,000ft apart, has now been the focus of research by scientists and historians for 25 years.

The discovery is the result of two decades' worth of research on the micro-organisms on Titanic, which sank in the on her maiden voyage.

It was made by Dr Henrietta Mann and Bhavleen Kaur from , in , , in conjunction with researchers from the of , .

Dr Mann, adjunct professor with the department of civil engineering, said: 'I think Titanic has maybe 15 or 20 years left. I don't think it will have too much longer than that.
'It has already lasted for 100 years, but eventually there will be nothing left but a rust stain on the bottom of the .'

The bacteria was discovered in rusticles collected from the wreck of by a team of scientists in 1991.

Dr Mann and her team began studying them in 1995, but it is only within the last few years that DNA technology has progressed enough for the bacteria to be isolated and studied fully.

The rusticles - porous, dark orange, icicle-like structures that form on rusting iron - covered the metal surface of Titanic and are home to a host of micro-organisms.

This includes 27 strains of bacteria, from which Halomonas titanicae was isolated and found to be particularly partial to iron.

Its destructive tendencies mean the delicate rusticles will eventually disintegrate into a fine powder in the salt water. 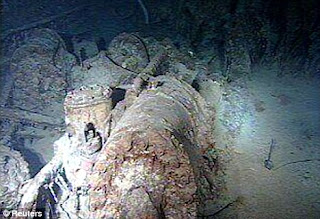 Dr Mann said: 'The rusticles on Titanic are made from a composition of different micro-organisms. It's not just one species of bacteria munching on it.

'But we have now identified one which particularly likes eating iron.

'To explain it in human terms, not every type of bacteria has the same taste. So if you present different people with a plate of chocolate and cheese, some may prefer one and some the other.

'This is a type of bacteria which particularly likes eating iron.

'Nature is very clever, and everything is recalled eventually. Nature makes it, and nature claims it back.

'In this case, the bacteria helps to decompose the ship.'

While the preservation of Titanic is now thought to be impossible, it is hoped the discovery could lead to scientists being able to prevent the destruction of other iron structures.

Dr Mann said: 'Unfortunately, because Titanic is 2.3miles down, it is very difficult or impossible to preserve. It is film which will preserve it for history now.

'I hope that we are able to do more research into the bacteria. There are oil rigs, iron pipes and other iron structures in the ocean which may deteriorate in the same way as Titanic.

'To come up with certain things to prevent micro-organisms taking hold of them, or slowing down the process would be a useful thing.'

Ed Coghlan, chairman of the Irish Titanic Historical Society, said: 'This research backs up what divers who have been down to the wreck have seen; that the ship is falling apart.
'Fortunately it has been photographed extensively and there are wonderful videos to show us what it looked like underwater.

'In the future, people might think it is a shame we didn't do more to preserve it, but the reality is that to preserve it would cost an absolute fortune and is probably almost impossible.

'It may be that as the structure of the wreck disappears, more of the interior becomes accessible.

'We may be able to learn even more about Titanic once things like the mail bags, for example, become visible.

'Titanic is a very human story and it will be fascinating to see what happens to the wreck in the coming years.'

It is not yet known if the new species of bacteria was present on the RMS Titanic before or after it sank, or whether it is a unique strand to that particular wreck.

Dr Mann and her team have published their findings in the latest issue of the International Journal of Systematic and Evolutionary Microbiology.


Read more: http://www.dailymail.co.uk/sciencetech/article-1346446/Titanic-wreck-completely-destroyed-20-years-new-rust-eating-bacteria.html#ixzz1AvPScs00
Posted by arclein at 12:01 AM