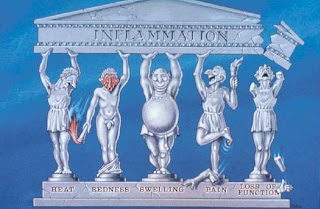 The take home thought here is that inflammation is an indicator of an imbalance of proteins in the affected region.  It arguably supports therapies that stimulate all this.  Because rigor is still lacking, a lot of this is mere guess work.

Forgetting propaganda about the immune system may at least eliminate another flawed misdirection as often happens in medicine.

The idea that a protein imbalance can be corrected is a useful idea.  It is certainly no more wrong in terms of application.  One leads to a dose of anti inflammatories and the other perhaps to a massage.  Either will not harm and either may actually help.  Better still, take an aspirin and get a massage as the first step in any regimen.  Then ask your doctor if there is a real problem.

Inflammation: Take a Look at the Lymphological View

(NaturalNews) In 2001, the medical community began admitting that inflammation is a common denominator of every degenerative disease known to man. The life`s work of Dr. C. Samuel West should therefore have been officially validated. Today the official story on inflammation is primarily one of blame on the immune system. According to current medical consensus - your immune system might be out to get you! However, there seems to be many gaps in the usual explanations for inflammation. The ability to see these gaps is the ability to recognize measures that can prevent inflammation and much of what results in virtually any disease process.


Inflammation is not a single phenomena. It is a group of a great deal of combined phenomenon that may only be properly explained through lymphology or cellular ecology. The main thing to understand about inflammation is the way that the initial process impacts the cell environment and therefore the organisms that become exposed to those conditions. It is obvious that the conditions in which these cells must interact must be corrected before we can expect to correct how the organisms function and behave.


One aspect of inflammation that is particularly neglected in formal educational institutions is the way that blocked circulation by way of "trapped plasma proteins" produce the conditions that result in any degenerative disease one might care to name (and in no way have the conventional medical curriculum ever properly implicated trapped plasma proteins in the causation of any disease). So it is an amazing dichotomy when inflammation itself is such a process of blocked circulation and is finally determined to be a common denominator of every disease, and yet the immune system is found to be the culprit of it all...


In the 70`s Dr. C. Samuel West became the first in the world to lecture publicly on "trapped plasma proteins" and developed a method of activating the lymphatic system dynamically that he called The Art of Lymphasizing, a group of techniques used to disassociate the plasma proteins and pull out the excess fluid from around the cells. As Dr. West taught, "this brings the oxygen back into the cells and turns on the electric generators that give each part of the body the power to work properly".


The original Art of Lymphasizing is a combination of deep breathing, bouncing, stroking, compressing tissues, and energy techniques that have been used successfully by tens of thousands of people around the world.


Today, the founded is adding stretching, yawning, earthing, vibratory techniques, percussion, and a system of contraction and relaxation to the "Art". Yet they are quick to call people's attention to the fact that every ancient culture on the face of the planet has a ritual of activating their lymphatics in one way or another; all animals in nature have ways of activating lymphatics, and there is in reality an unlimited variety of ways in which to effectuate the lymphatic system.


Performed regularly or as needed people can use various methods of lymphatic effectuation to bring their cells back into the vacuum packed state found in all healthy tissues. This describes a way to fully reverse the anoxic conditions that always precede every case of chronic inflammation; or to fully reproduce the conditions that enable the aerobic life process (and healing) once again.


Sources for this story include: The Golden Seven Plus One by Dr. C. Samuel West DN, ND, Chemist & Lymphologist

About the author
Karl J. West is the current acting President of the of Lymphology. As one of Dr. C. Samuel West's offspring he began his experiences in the field of Health Care at a very young age. He is currently focusing on his writing and studying the works of other leaders in the field.

You may visit htp://www.ial.org to subscribe to 7 Free Introductory Lessons.

"The divinity within compels each of us to spread the truth and the light we have come to know and trust. Let us be EMPOWERED and united in our hearts and minds for the equal manifestation of all our virtuous dreams: 'A Healer in Every Home'." KJW
Posted by arclein at 12:01 AM

Thanks for the nice post. Do you know about?? B-CURE LASER LLLT-808 - a breakthrough in soft laser therapy. It is the first portable soft laser device in the world with the healing power equal to that of a full-sized, stationary, expensive soft-laser machines used only in hospitals and prestigious care facilities.