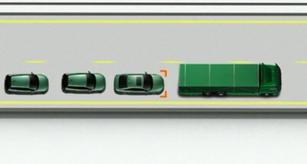 This idea may have much more merit than is particularly obvious.  The processing technology certainly exists and although they argue for a professional driver in the lead car, that may not be too necessary if the governing program enforces obvious restraints.  Drivers will quickly adapt to the natural constraints placed by leading a string of vehicles and communicating with all other drivers in the string.

Certainly driving onto the freeway and picking up a conga line and then not having to pay any further attention will turn out to be a very popular method of commuting back and forth to work in particular.  It is repetitive and frees up quality time for the drivers.  Parameters can be set such as specific alerts as to when to leave the line.

We are going to have smart cars that drive us to work, but this can be a good interim step.

It's 2011, where's your self-driving car? With "road train" technology, now in development by Volvo, it could be the car you already own. Road trains, or platoons, create semi-autonomous conga lines of cars following one leader vehicle with a professional driver. Volvo's calling the project SARTRE -- Trains for the Environment. (You can exit, though -- cars can leave the train at any time.) But what are the real environmental effects?

No new infrastructure: Other plans for driverless cars require significant changes to roads or vehicles. Volvo's plan makes use of sensors that many modern cars already have, says New Scientist:

Some modern cars already come equipped with sensors and actuators to ensure that they don't get too close to the car in front, or don't drift out of their lane, says Robinson. SARTRE was set up to exploit these technologies, but to use them to bring vehicles closer together instead.

That's still a car, sport: What we said about the Google self-driving car still holds true: "[J]ust taking the person out of the driver's seat doesn't solve all the other junk in a car trunk (human isolation, pollution, enough parking spots in the world)." It's all well and good to make our existing car culture cleaner and safer, but let's put some of that innovation towards reducing it, too.
Here's Volvo's video of how road trains work.