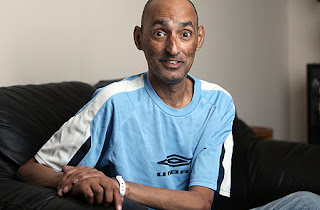 This certainly is cracking a record or two.  The main take home here is that effectively chest compressions kept him alive.  That is why the new protocols do not emphasize blowing air into the lungs at all.  In his case it took 20,000 compressions or one hundred compressions per minute.

Thus anyone confronted with a collapsed victim needs to call 911 and immediately begin chest compressions.  This will prevent brain cell death while waiting for the emergency response team.  In this victim’s case, his heart only failed as he entered the hospital.

I personally collapsed from a heart attack over five years ago and immediate CPR allowed the heart to be restarted twenty minutes later.  I also avoided damage when a mere five minutes of inattention would have allowed damage to the brain.  It was after my event and likely several similar cases that the CPR protocol itself was changed to clearly emphasize the compression part.

What is happening is that the heart is not beating at all and normal circulation has stopped.  Therefore it is impossible for oxygen acquired by the lungs to go anywhere at all.  Yet the compressions are causing a tidal flow to be established in the body in which the blood sloshes back and forth through the tissues including the brain.   It may be only an half an inch either way.

The blood itself carries a great deal of oxygen and the body itself drops into some form of hibernation.  Thus the movement keeps the cells replenished with some oxygen to survive.  Astoundingly, while in my case twenty minutes proved enough, in this case we have just learned that the oxygen availability is good for a full three and one half hours.

This means that accident victims going into cardiac arrest can be put on a compression machine and ample time is available to bring the body temperature down to allow major repair.

All of a sudden cardiac arrest becomes survivable and even a useful event for the seriously injured because it allows more radical treatment options.

Miracle man comes back 'from the dead' after 3.5 hours - medical skill and high tech machine save him

A MAN whose heart had stopped was brought back from the dead after three-and-a-half HOURS.

Arun Bhasin, 53, was rushed into hospital after being found unconscious in the street in temperatures of -10C.

But as he was being wheeled in, he went into cardiac arrest and was just minutes from death.

By pure luck, he’d been taken to the – home to two of the country’s top experts in resuscitation.

They put him on a pioneering new CPR machine which performed almost 20,000 life-saving chest compressions.

Dr Nigel Raghunath, said: “He was pretty much dead in that he had no pulse or heartbeat for three-and-a-half hours so it is amazing that we got him back.”

Engineer Arun, of , admitted: “I should be dead. I can’t believe they kept me alive for so long. It’s a miracle.

“They are amazing people and I know I am very, very lucky.”

The drama started over Christmas as he walked home from a party in Croydon, , when he hit his head.

He was taken to hospital but his body temperature had plummeted 10 degrees. Medics, led by Dr Raghunath and Russell Metcalfe-Smith, hooked him up to the AutoPulse machine to keep his heart and lungs functioning.

Dr Raghunath explained: “It meant that we could get on with the job of getting him back while it gave him a chance of recovery.

“If not we would have needed relay teams of people continually performing chest compressions while we worked around them.”

The team battled on and the machine used up four batteries.

With the clock approaching three-and-a-half hours, Arun’s pulse returned and his heart flickered back to life.

Mr Metcalfe-Smith said: “You read about this sort of things in medical journals but never expect to come in contact with them.

“The machine bought us the time and the skill of the medical team did the rest.”