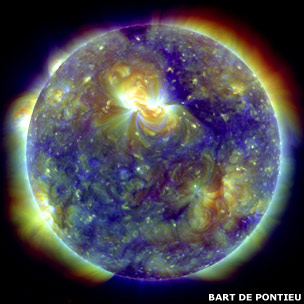 This work has identified jets emerging from beneath the surface of the sun passing upward and then falling back but leaving super heated remnants behind in the corona.  It is mechanical but a clear path to causing a hotter corona than can be modeled otherwise.

And when you can see it happening, it is a good bet to go with.

The visible surface layer is comparatively cool, so some mechanism was needed to deliver heat to the corona and it was a riddle.

Scientists say they are closer to understanding why the Sun's outer atmosphere is hotter than its surface.

The corona, as it is known, is millions of degrees hotter than the star's visible surface layer, or photosphere.

Two satellites have now identified jets of super-heated gas, called spicules, shooting up from just above the Sun's surface into the outer atmosphere.

Researchers tell the journal Science that this process could be what maintains the temperature difference.

"It's always been quite a puzzle to figure out why the Sun's atmosphere is hotter than its surface," said Scott McIntosh, from the for Atmospheric Research (NCAR), a co-author on the Science study.

"By identifying that these jets insert heated plasma into the Sun's outer atmosphere, we gain a greater knowledge of the corona and possibly improve our understanding of the Sun's subtle influence on Earth's upper atmosphere."

Spicules have long been thought to play a role in coronal heating but previous observations have never had the resolution to study their behaviour in sufficient detail.
The step change has come from new satellites in orbit. This research combined the observational power of 's Hinode spacecraft and the American Solar Dynamics Observatory, which was launched just last year.

These platforms watched as the spicules shot up through the lower solar atmosphere in remarkable volume and at tremendous speed.
The amount of material being sent up into the corona is about 100 times as much as streams away from the Sun in the solar wind towards the edges of the Solar System, say the scientists. And the jets are moving at about 300,000km/h, they add.

The research found that a large fraction of the gas is heated to a hundred thousand degrees, while a small fraction is heated to millions of degrees.

Time-lapsed images show that while much of the material which spews upwards comes straight back down, a small fraction of the gas that is heated to millions of degrees does not immediately return to the surface.

Given the large number of spicules on the Sun, and the amount of material in the spicules, the scientists believe that if even some of that super-hot plasma stays aloft it would make a contribution to coronal heating.

"Our challenge now is to understand what drives and heats the material in the spicules," said Dr Bart De Pontieu from the Solar and Astrophysics Laboratory of the Lockheed Martin, which made SDO for the US space agency (Nasa).