Nothing like real success to bring everyone to their senses..  Understand something that is terribly basic here.  It is that a rocket that is reusable is quite able to lift an hundred ton payload up into the stratosphere, coast over to the other side of the world and the fire up and safely land anywhere it wishes and has a pad.

It can then refuel while been unloaded and do a return flight.  That is what this is all about ladies.  no pilots needed and long haul air cargo is doomed.

This is also a vastly superior platform for Space transport develo-pment.  Not least we really need a real low orbit space station that looks like a rotating disk able to spin up one g on the frim while bringing loads into the hub.  This can then support a geostationary station at high orbit and from that suppoort a lunar orbital station as well.  This calls for three SPACE habitats that are permanent  and dropping a load down to the moon becomes easy.

The architecture of a Space station should allow proper protection as well.

sooner or later we will build all this and 8it can be a full push program, particulary if we  really get serious about long haul cargo.

we will do human beings as well, but we also can wait until reliability compares to airlines or we master wormhole movement.

An aerospace engineer explains why SpaceX’s Starship will change everything.

May 12, 2022
In the late afternoon of May 5, SpaceX’s Elon Musk tweeted, “Starship landing nominal!” Musk is not known for understatement. But seeing that stainless steel behemoth soar was, for many, something more like phenomenal. Over 5 million people watched the spectacle on YouTube, perhaps many with bated breath, as every prior attempt at landing Starship had gone up in flames. Not SN15. This Starship, after having climbed 12 kilometers and then coasted down in a “belly flop” configuration—using its wide silver body as a brake—descended slowly, the force of its Raptor engines offering a soft, safe landing.
Some folks at NASA probably felt a sense of relief. To the astonishment of the space industry, in April, NASA had awarded SpaceX a $2.9 billion contract to modify Starship to serve as the system that’ll take astronauts to the moon. The favorite to win the job wasn’t SpaceX, but the heavyweight “National Team,” consisting of Jeff Bezos’ Blue Origin, veteran aerospace contractors Lockheed Martin, Northrop Grumman, and Draper Labs. The selection was so unexpected that, when word of it was first leaked by the Washington Post, some well-informed observers refused to believe it. Politics suggested the National Team was the safe and sure bet
. 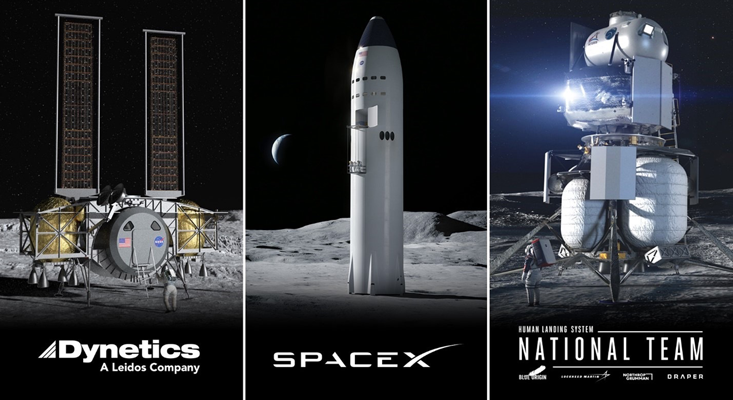 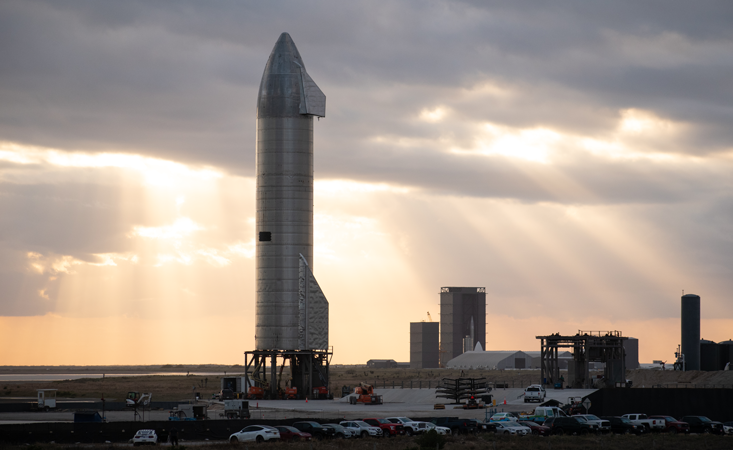 SPACEPORT: SpaceX is rapidly expanding its Boca Chica operations (above) to produce Starships faster and turn the small Texas village into a spaceport Musk wants to call Starbase.Wikimedia Commons
In February 2020, I travelled with my wife, Hope, to Boca Chica, a small city in Texas with a lot of low-lying land, near the Mexican border, where SpaceX is developing Starship and rapidly expanding. Musk wants to incorporate a town there and call it “Starbase.” A mariachi band was playing outside, entertaining long lines of people waiting to apply for jobs. Hundreds were already at work in the complex. Soon there would be thousands. It was apparent that Musk was not building a ship, he was building a shipyard. In the course of its 30-year Shuttle program, NASA built five Space Shuttles, one every six years on average. On our visit, Musk was gearing up to build Starship prototypes at a rate of one per month, which he’s actually done.
Rather than opting to analyze everything for years or decades before any flight tests, as NASA has done, Musk’s approach is to build, launch, crash, fix problems, then try again. He’s pushed his way through almost the entire flight envelope of Starship’s upper stage system. With the success of the SN15 flight, he is now in position to fly it again and again. Musk is aiming for higher altitudes and increased operational perfection until his team can do it blindfolded. SN16 and SN17, incorporating yet more advances on SN15, are nearly complete.
For a space program to be supported, not by three or four flight vehicles, but by scores of them—and eventually hundreds—is revolutionary. Starship ascents will be counted in rates of flights per week, or even per day. The Shuttle’s average flight rate of four per year, meant that, with a program annual cost of $4 billion per year, the actual cost of a Shuttle flight was a whopping $1 billion. A Starship transorbital railroad, employing 5,000 people, would cost about that much per year. Musk is aiming to manage 200 flights, which is possible with 20 operational Starships each turned around to fly again every 36 days. That would work out to $5 million per flight, 1/200th the cost of the Shuttle with five times its payload, for a thousandfold improvement overall.
The benefits of Starship for both robotic and human exploration are hard to overstate. Mars’ recent arrival, Perseverance, can deliver one ton to the Red Planet’s surface. Starship, with its 100-ton capacity, can land a battalion of robots. These could include many Perseverance-like explorers, and much bigger versions of the Ingenuity helicopter. Smaller rovers armed with high-resolution cameras could map the area, transmit to Earth, and allow millions of citizen scientists to walk the landscape in virtual reality and point the machines toward anything interesting. Construction robots, too, possibly humanoid in form, could build a Mars base capable of converting Martian carbon dioxide and water ice into methane-and-oxygen rocket propellant to store in tanks. With such a set-up, fully supplied in advance, Starships could start sending humans.
Rovers are wonderful, but they cannot resolve the fundamental scientific questions that Mars—once very much like the early Earth—poses to humanity: Is life unique to Earth, or did it appear on Mars, too? If so, did it use the same DNA-RNA information system, or something else? Is life as we know it on Earth what life is, or is it just a particular example drawn from a vast tapestry of possibilities? Finding evidence of past life requires fossil hunting. Perseverance will make a stab at that, but human rockhounds—capable of traveling far over difficult terrain, climbing, digging, working delicately, and intuitively following up on clues—can do the job much better. Finding extant life to determine its nature will require drilling down hundreds of meters to reach underground water where life might still thrive, bringing up samples, culturing them, and subjecting them to analysis. That is light-years beyond the ability of robotic rovers.
But there is more. Starship won’t just give us the ability to send human explorers to Mars, the moon, and other destinations in the inner solar system, it offers us a two-order-of-magnitude increase in overall operational capability to do pretty much anything we want to do in space. That includes not only supporting a muscular program of probes to the outer solar system, and making all sorts of experimental investigations in Earth orbit economical, but enabling the construction of giant space telescopes. Much of our knowledge of physics has come from astronomy. This is so because the universe is the biggest and best lab there is. There is no better place to do astronomy than space. The 2.4-meter Hubble Space Telescope has made extraordinary discoveries. What might we learn once we are able to build 2.4-kilometer telescopes in deep space? The possibilities are literally inconceivable.
Robert Zubrin, an aerospace engineer, is the founder of the Mars Society and the president of Pioneer Astronautics. The 25th Anniversary edition of his book The Case for Mars: The Plan to Settle the Red Planet and Why We Must was recently published by Simon and Schuster. Follow him on Twitter @robert_zubrin.
Footnotes
1. Machay, M. & Steinberg, A. NASA funding in Congress: Money matters. European Journal of Business Science and Technology 6, 5-20 (2020).
2. Logsdon, J.M. & Miller, J.R. US-Russian cooperation in human space flight: Assessing the impacts. NASA.gov (2001).
3. While clearly better on a conceptual level than the National Team offering, the Dynetics design never really had a chance, because the team behind it was not credible enough to be given responsibility for something of such central importance to the space program. Rather, they were given a nice chunk of change in order to assure a wide base of support for Artemis.
4. It would only take two tanker flights to fly an unloaded Starship one-way to Mars, or five to send it there carrying 100 tons of cargo.
Lead image: AleksandrMorrisovich / Shutter
Posted by arclein at 12:00 AM