How Arizona is Turning into a Farmland Oasis 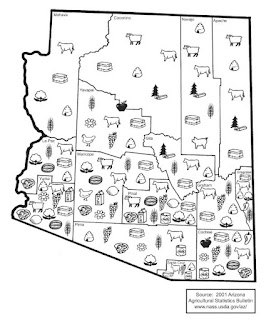 Looking all around the world, we easily forget to see what is happening where money is not the problem such as Arizona.
All these irrigated fields need deep rooted trees to provide nutrient lift, shade and humidity as well.  do that properly and you should get an evening rain dump and plenty of dew as well.

Do up those hillsides and weeds and grasses will recover allowing a solid cattle stocking density as well using rotational grazing.  what is demanded here is well placed shade trees.  In fact east west to create continous day long shade everywhere.  We are likely describing thirty percent shade at best and good humidity.
I am beginning to think East west is best even in higher latitudes.  Our crops get way too much sun everywhere and a little less merely delays maturation a little while the plants themselves are healthier and stronger.

No one is really studying all this yet and we do need to look at those desert states.  using trees to create an active hydraulic cycle is something we can do.

How Arizona is Turning into a Farmland Oasis


https://www.youtube.com/watch?v=jM9j12VfqcQ
Southern Arizona is known for its desert climate, with very hot summers and mild winters. This climate has meant the region has been a hub for agricultural growth for thousands of years despite the fact rainfall has always been relatively low. It's Arizona's rivers and aquifers that hold groundwater which have supported the state’s now $23 billion agriculture industry.
In terms of revenue generated, Arizona's top five agricultural products are cattle, calves, lettuce, dairy products, cotton, and hay. In total, farmland makes up about 35% of the state of Arizona. Farming in the desert has been a challenge for Arizona’s modern farmers, who grow water-intensive crops like cotton, alfalfa and corn for cows. It's estimated that these farms use nearly three-quarters of the available water supply to irrigate their crops.
The Colorado River system, which supplies 36 percent of Arizona's total water use has experienced extensive drought conditions for the past 19 years. This has resulted in Lake Mead dropping to historically low reservoir levels. More than one-third of Arizona’s water flows up the Colorado River to Lake Mead. This year an intensifying drought and declining reservoir levels across the Western United States has prompted the first-ever water supply cuts to Arizona farmers.
Extensive droughts and dwindling water supplies have wreaked havoc on the once prosperous farms that could endure the arid conditions. Arizona has also become one the fastest growing states in the last decade, as result there has been a demand for tree lined neighborhoods, golf courses and lawns, all of which require vast amounts of water. As we keep consuming the ancient groundwater, without it being replenished, water tables drop and rivers start to dry up.
However over the last 30 years Arizona has been turning this around, in this video we will show you how a low cost innovative water retention system is being used in the desert, turning the dry landscape into a fertile carbon sink stretching over 100,000 acres and we will show you how this system is recharging the aquifers, by improving water retention by at least 28% which has helped to increase biodiversity, turning the desert back into a farmland oasis.
Thanks to Valer Clark Austin and Josiah Austin restoring the watershed in the Chiricahua Desert in Arizona and Mexico. You can find out more by visiting the Cuenca Los Ojos foundation webpage.
\
<iframe width="668" height="376" src="https://www.youtube.com/embed/jM9j12VfqcQ" title="How Arizona is Turning into a Farmland Oasis" frameborder="0" allow="accelerometer; autoplay; clipboard-write; encrypted-media; gyroscope; picture-in-picture" allowfullscreen></iframe>