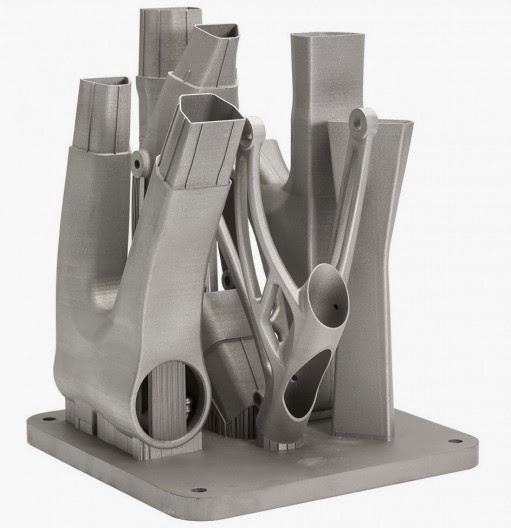 More to the point we dodge casting and the nearly impossible step of machining for titanium.  This can bring costs down hugely and make these components very cost effective.  We are not spinning a tub through a die so fabrication time is still up there.  Yet we can expect one time fabrication with no tool loss.

We are still a ways away from building out an automobile perhaps but this certainly makes it possible.  Fabricating an engine is attractive.

Perhaps in time it will become possible to fab out every item designed by man during the past century or more.  Thus any vehicle can be tested and operated from pristine condition.  There will be scant need to preserve old worn devices.

When it comes to a high strength-to-weight ratio, titanium is just about the best material out there for manufacturing bicycle frames. Unfortunately, those frames are also quite expensive. They could be about to come down in price, however – two British companies recently teamed up to create the world's first 3D-printed titanium bike frame.

The frame was built using an AM250 laser melting machine manufactured by Renishaw. In the build process, a high-power ytterbium fibre laser was used to selectively fuse together particles of a titanium alloy powder. Layers of those fused-together particles were built up one upon the other, to form the finished sections of the frame. Those sections were then bonded together using an adhesive.

Because titanium has a higher density than aluminum, less of it had to be used if Empire wanted a finished bike that was lighter than the stock model. To make that happen, topological optimization software was used – it structurally assessed computer models of each part of the frame, and determined where less material could be used without negatively affecting strength.

As a result, at a total of 1,400 grams (3 lb), the finished Evo frame weighs 33 percent less than its aluminum counterpart. When its seatpost bracket was tested, it exceeded the EN 14766 mountain bike strength standard by six times. The strength of the frame as a whole is still being tested.

So, how could this project lead to cheaper titanium frames? For one thing, in the laser melting process, there's no waste – all of the titanium alloy powder that isn't fused to make one frame can be reused in another, plus the topological optimization process ensures that less of it is needed in the first place. Additionally, no special machining has to be created or set up for specific frame designs, which would be the case with cast metal.

It should also be relatively simple to tweak frame designs as needed, or to add custom features to individual frames. And finally, it shouldn't be any more difficult to create components with complex shapes than those that are relatively basic.

The European Aeronautic Defence and Space Company (EADS) has previously created a 3D-printed bicycle frame, although it was made from nylon.