Enough Is Enough: Banksters Are Not Our Only Option With Ellen Brown 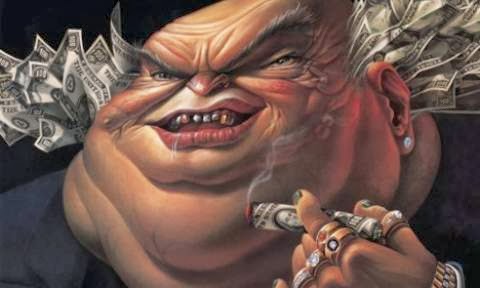 What everyone has failed to understand is that banking is at its best and most effective locally.  The closer we can operate to the real source of all credit and wealth creation the better the results.  This continues to be ignored and even obscured by leaders and opinion makers.

It is obviously a long drawn out process but every large city and every State can relieve themselves of an excessive interest rate burden by incorporating their own bank and JVing with the local commercial banks to support local needs.  It has the added advantage of making bad policy personally costly to the elected decision makers.
Getting this solution to roll out continues to be a challenge.  It will obviously need a strong leader somewhere to act o9n it and to drive it home.

Enough Is Enough: Banksters Are Not Our Only Option

By Ellen Brown (about the author)

"Epic in scale, unprecedented in world history . " That is how William K. Black, professor of law and economics and former bank fraud investigator, describes the frauds in which JPMorgan Chase (JPM) has now been implicated. They involve more than a dozen felonies, including bid-rigging on municipal bond debt; colluding to rig interest rates on hundreds of trillions of dollars in mortgages, derivatives and other contracts; exposing investors to excessive risk; failing to disclose known risks, including those in the Bernie Madoff scandal; and engaging in multiple forms of mortgage fraud.

So why, asks Chicago Alderwoman Leslie Hairston, are we still doing business with them? She plans to introduce a city council ordinance deleting JPM from the city's list of designated municipal depositories. As quoted in the January 14th Chicago Sun-Times:

The bank has violated the city code by making admissions of dishonesty and deceit in the way they dealt with their investors in the mortgage securities and Bernie Madoff Ponzi scandals. . . . We use this code against city contractors and all the small companies, why wouldn't we use this against one of the largest banks in the world?

A similar move has been recommended for the City of Los Angeles by L.A. City Councilman Gil Cedillo. But in a January 19th editorial titled "There's No Profit in L A. Bashing JPMorgan Chase," the L.A. Times editorial board warned against pulling the city's money out of JPM and other mega-banks -- even though the city attorney is suing them for allegedly causing an epidemic of foreclosures in minority neighborhoods. "L.A. relies on these banks," says The Times, "for long-term financing to build bridges and restore lakes, and for short-term financing to pay the bills." The editorial noted that a similar proposal brought in the fall of 2011 by then-Councilman Richard Alarcon, backed by Occupy L.A., was abandoned because it would have resulted in termination fees and higher interest payments by the city.

It seems we must bow to our oppressors because we have no viable alternative -- or do we? What if there is an alternative that would not only save the city money but would be a safer place to deposit its funds than in Wall Street banks?

The Tiny State That Broke Free
There is a place where they don't bow. Where they don't park their assets on Wall Street and play the mega-bank game, and haven't for almost 100 years. Where they escaped the 2008 banking crisis and have no government debt, the lowest foreclosure rate in the country, the lowest default rate on credit card debt, and the lowest unemployment rate. They also have the only publicly-owned bank.

The place is North Dakota, and their state-owned Bank of North Dakota (BND) is a model for Los Angeles and other cities, counties, and states.

Like the BND, a public bank of the City of Los Angeles would not be a commercial bank and would not compete with commercial banks. In fact, it would partner with them -- using its tax revenue deposits to create credit for lending programs through the magical everyday banking practice of leveraging capital.

The BND is a major money-maker for North Dakota, returning about $30 million annually in dividends to the treasury -- not bad for a state with a population that is less than one-fifth that of the City of Los Angeles. Every year since the 2008 banking crisis, the BND has reported a return on investment of 17-26%.

Like the BND, a Bank of the City of Los Angeles would provide credit for city projects -- to build bridges, restore lakes, and pay bills -- and this credit would essentially be interest-free, since the city would own the bank and get the interest back. Eliminating interest has been shown to reduce the cost of public projects by 35% or more.

Awesome Possibilities
Consider what that could mean for Los Angeles. According to the current fiscal budget, the LAX Modernization project is budgeted at $4.11 billion. That's the sticker price. But what will it cost when you add interest on revenue bonds and other funding sources? The San Francisco-Oakland Bay Bridge earthquake retrofit boondoggle was slated to cost about $6 billion. Interest and bank fees added another $6 billion. Funding through a public bank could have saved taxpayers $6 billion, or 50%.

If Los Angeles owned its own bank, it could also avoid costly "rainy day funds," which are held by various agencies as surplus taxes. If the city had a low-cost credit line with its own bank, these funds could be released into the general fund, generating massive amounts of new revenue for the city.

The potential for the City and County of Los Angeles can be seen by examining their respective Comprehensive Annual Financial Reports (CAFRs). According to the latest CAFRs (2012), the City of Los Angeles has "cash, pooled and other investments" of $11 billion beyond what is in its pension fund ( page 85 ) , and t he County of Los Angeles has $22 billion ( page 66 ) . To put these sums in perspective, the austerity crisis declared by the State of California in 2012 was the result of a declared state budget deficit of only $16 billion.

The L.A. CAFR funds are currently drawing only minimal interest. With some modest changes in regulations, they could be returned to the general fund for use in the city's budget, or deposited or invested in the city's own bank, to be leveraged into credit for local purposes.

Minimizing Risk
Beyond being a money-maker, a city-owned bank can minimize the risks of interest rate manipulation, excessive fees, and dishonest dealings.

Another risk that must now be added to the list is that of confiscation in the event of a "bail in." Public funds are secured with collateral, but they take a back seat in bankruptcy to the "super priority" of Wall Street's own derivative claims. A major derivatives fiasco of the sort seen in 2008 could wipe out even a mega-bank's available collateral, leaving the city with empty coffers.

The city itself could be propelled into bankruptcy by speculative derivatives dealings with Wall Street banks. The dire results can be seen in Detroit, where the emergency manager, operating on behalf of the city's creditors, put it into bankruptcy to force payment on its debts. First in line were UBS and Bank of America, claiming speculative winnings on their interest-rate swaps, which the emergency manager paid immediately before filing for bankruptcy. Critics say the swaps were improperly entered into and were what propelled the city into bankruptcy. Their propriety is now being investigated by the bankruptcy judge.
[ I would sure like to try that in a bankruptcy proceeding!! – arclein ]
Not Too Big to Abandon
Mega-banks might be too big to fail. According to U.S. Attorney General Eric Holder, they might even be too big to prosecute. But they are not too big to abandon as depositories for government funds.

There may indeed be no profit in bashing JPMorgan Chase, but there would be profit in pulling deposits out and putting them in Los Angeles' own public bank. Other major cities currently exploring that possibility include San Francisco and Philadelphia.