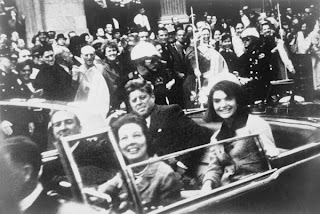 Yes, the bullet should have passed cleanly through the skull and it is pretty certain that Oswell fired no special ammunition.  So we do have a creditable anomaly that has attracted official hairsplitting to explain away.    A close at hand hollow point solves it nicely.

It does not remove the intent of Oswell or of any projected conspiracy.  But it did turn a plausibly survivable attack into a fatal event.  It also explains the level of cover up because it gave those close a reason to not throw the investigation completely open.  It could not have worked out better for any plausible conspirators.

The clear result is that self-induced misdirection took the investigators off the track of obvious motives that screamed for close scrutiny and provide clear cover for the necessary instructions.

A new documentary alleges that a Secret Service agent was the second (and accidental) shooter in the assassination of John F. Kennedy.


At the Television Critics Association press tour in Los Angeles on Sunday, producers and investigators behind Reelz Channel's new documentary "JFK: The Smoking Gun" made the claim that George Hickey, a Secret Service agent riding in the car behind Kennedy, accidentally shot the president on Nov. 22, 1963. The film follows veteran police detective Colin McLaren in his four-year investigation of the assassination and points at Hickey, who died two years ago.


McLaren's research built on the work of Howard Donahue, who spent 20 years studying the assassination and had his findings documented in Bonar Menninger’s book Mortal Error: The Shot That Killed JFK, A ballistics expert's astonishing discovery of the fatal bullet that Oswald did not fire McLaren and Menninger were on hand Sunday to take questions about their film, which the network billed in press notes as a "docudrama."


Addressing the crowd, McLaren claimed that Hickey and otherSecret Service agents were out partying the night before Kennedy's fatal motorcade drive through Dallas. Based on his painstaking investigation, McLaren said, evidence suggests Hickey was not qualified to use the weapon he was holding the morning of the shooting.


"It was his first time in the follow car, his first time holding the assault weapon he was using,"
McLaren said. Producers said the film's theory is that shots rang out, and Hickey grabbed his weapon to return fire. When his car stopped suddenly, Hickey accidentally discharged his weapon -- making him the second shooter, the film's investigators and producers alleged.


McLaren said he believes that Hickey's weapon had hollow-point rounds -- different from the ammunition for the weapon used by Lee Harvey Oswald, whom the Warren Commission declared in 1964 was the lone gunman in the case. Menninger and McLaren said that based on their review of the forensics in the case, they believe that Kennedy was also struck by a hollow-point round.


Oswald was killed before he could stand trial, but the case has continued to inspire various theories around just how the tragedy occurred. Books and films have advanced different ideas -- including a second shooter theory.


"We're not saying this was intentional," Menninger said Sunday. "This was a tragic accident in the heat of the moment."


"We don't suggest he was in any way involved in a conspiracy," Menninger added.


Donahue wrote about his theory decades ago, but McLaren said it's taken decades -- and the release of thousands of JFK-related documents during the Clinton administration -- for a proper review of all the evidence and information related to the case. The authors acknowledged Sunday that there are many other books and films on the assassination, but said theirs is unique because it is based on a new review of the documents released during the 1990s.


McLaren and Menninger also alleged that the government -- including Robert F. Kennedy -- covered up the involvement of the Secret Service and Hickey.


The producers were pressed on how the alleged involvement of the Secret Service could be covered up for 50 years.


"Nobody was going to gain" from having this out there, Menninger said.


"We're not here to blacken the name" of Hickey or any otherindividual, or the modern-day Secret Service, McLaren said.


Menninger discussed the fact that he was sued by Hickey in the 1990s, but noted that despite a settlement, his publisher never removed his book from the shelves.


"I'm sure that [Hickey] suffered greatly from this," Menninger said. "The fact that he passed on -- maybe it's time to talk about it."


"Our documentary is going to be the only one that has opened the case forensically and looked at the evidence from the beginning and examined everything that happened that day in Dealey Plaza," Michael Prupas, the film's executive director, said.


Reelz Channel gained notice two years ago for airing the miniseries "The Kennedys," which some historical experts criticized as an unflattering portrayal of the family.


The Reelz Channel will mark the 50th anniversary of John F. Kennedy's assassination this November with a documentary dusting off the theory that he was actually killed by "friendly fire" from a clumsy Secret Service agent.


"JFK: The Smoking Gun," which will premiere Nov. 3, is based on the book Mortal Error: The Shot That Killed JFK, A ballistics expert's astonishing discovery of the fatal bullet that Oswald did not fire

by Bonar Menninger, buttressed with a four-year investigation by Australian detective Colin McLaren.

Their work, McLaren and Menninger told TV writers here Sunday, stems from an earlier book by Howard Donahue that reached the same conclusion.


Hickey was riding in the follow-up car behind JFK's limousine in Dallas's Dealey Plaza on Nov. 22, 1963.


When Lee Harvey Oswald fired his first shot, the authors say, Hickey responded by trying to fire back with his Secret Service-issued AR-15.


But because he was inexperienced with the weapon and the car lurched forward, they say, his shot went awry and accidentally killed the President - who was also hit, but quite possibly not fatally wounded, by Oswald's second shot.


"There was no conspiracy," says McLaren. "We're just saying a second shooter fired the fatal round."


"The only conspiracy," said executive producer Michael Prupas, "was the subsequent coverup."


McLaren said much of the evidence from that day, including autopsy photos, was spirited away. But some of it was released starting in the 1990s, when he said a gag order was also lifted on those involved with the immediate investigation.


He said his conclusions were based on both witness testimony and forensic evidence.


Hickey, who died two years ago, sued St. Martin's when the Donahue book was published. The suit was dismissed on statute of limitations grounds and McLaren says St. Martin's paid a "nominal settlement" to Hickey to preclude an appeal.


McLaren says he made numerous attempts to contact Hickey, who never responded.


More than 800 books have tackled the Kennedy assassination, which McLaren called the "Holy Grail" of assassination cases. Another two dozen are scheduled this fall, along with a dozen or so TV series.


The 1960s Warren Commission report, which concluded Oswald was the lone gunman, has stood as the official explanation for the assassination. - NY Daily New


NOTE: I find it hard to believe that if this were the case, how was it covered-up for 50 years. This theory seems implausible to me...but I will watch the documentary. Lon

I live in Dallas County, and used to work as a Dallas County Jailer from 1985 to 1991. In 1985 or 86, I worked with a retired DPD Officer (Pollard) (now deceased) who was one of the several men who cornered Oswald in the theater, and he said that he saw Oswald stand and admit he shot the President.

He also said that there were other factors that would take decades to be waited out, before they would be revealed, but in due time, the rest of the story would come out, when there was no one left to prosecute.

To this day, there are government documents that when FOIA'd, they are redacted such that a complete story cannot be gained. That would not be the case if it truly were a single, lone, shooter by the name Oswald.