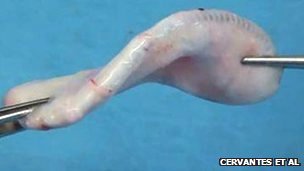 As we have posted before, organ replacement by simply regrowing your own is working.  The battle is won and it is now time to go over into the hot pursuit mode.  Every tissue type can be identified and it can be grown.  What remains is the engineering.

If we do this, then several years of effort and solution delivery will end almost all disability issues once and for all.  This will end the massive drain of society that it all represents.

I do think that most fundamental problems are now worked artound.

US scientists say they have moved a step closer to being able to grow a complete human ear from a patient's cells.

In a new development in tissue engineering, they have grown a human-like ear from animal tissue.

The ear has the flexibility of a real ear, say researchers at Massachusetts General Hospital in Boston.

The technique may one day be used to help people with missing or deformed outer ears, they believe.

Tissue engineering is a growing field in medical science, where substitute organs are made in the laboratory in the hope of using them to replace damaged ones.

The US research team is working on artificial living ears to help people born with malformed ears or who have lost them in accidents or trauma.

Previously the researchers had grown an artificial ear, the size of a baby's, on a mouse.

In the latest development, published in the Journal of the Royal Society Interface, they took living tissues from cows and sheep and grew them on a flexible wire frame that has the 3D shape of a real human ear.

This was then implanted into a rat whose immune system they had suppressed enabling the ear to grow.

It was significant for several reasons, he said.

The cells were grown on a titanium wire scaffold that is modelled on the dimensions of a real human ear, taken from CT scans.

The new work shows that in theory it is possible to grow up enough cells - at least in animals - to make a full-size human ear.

"In a clinical model, what we would do is harvest a small sample of cartilage, that the patient has, and then expand that so we could go ahead and do the same process," said Dr Cervantes.

"This research is a significant step forward in preparing the tissue-engineered ear for human clinical trials."

He said he expected that the process could move into human clinical trials in about five years.

Other research into bioengineered organs is progressing fast.

About a dozen patients have received transplants of artificial wind pipes coated with stem cells taken from either the patient or a donor.

Meanwhile, a kidney grown in the laboratory has been transplanted into a rat, where it started to produce urine.
Posted by arclein at 12:00 AM