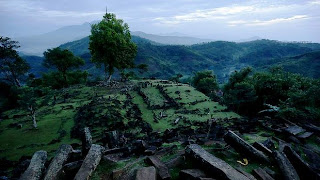 It is good to see Graham Hancock championing the Pleistocene Nonconformity of 12900 years ago.  We started this particular stream back in 2007 and watched as hard evidence steadily accumulated.  We knew it was real then but needed direct evidence and that is what has appeared.

Now we are picking up establishments from before and after.  It needs to be noted that agriculture over time forms extended societies not present at all in 10,000 BP.  Antique societies likely were coastal like the Haida societies of the Pacific Northwest. Thus large structures were surely ceremonial and not central to an urban scenario.

The best news is that scientists are looking with an open mind and trusting their data.  It is about time and I hope the plausible 45000 year window in Indonesia promotes plenty of digging.

"A professor is a policeman of the intellect..." Robert Shea and Robert Anton Wilson, 'The Illuminatus! Trilogy'


The orthodox paradigm of prehistory, foisted upon us for so long by the policemen of the intellect who dominate mainstream archaeology and history, is unravelling at a fantastic rate. Not only do we now have evidence for a massive cometary bombardment of the earth in the window of 13,000 to 12,000 years ago -- a bombardment quite sufficient to have brought a cataclysmic end to a former global civilisation -- but also we have the testimony of megalithic time capsules left by the survivors, and perhaps intended as a record and a warning for some future civilisation (our own?) to decode. I have already spoken extensively here about the extraordinary 12,000-year old megalithic site of Gobekli Tepe in Turkey, which was deliberately buried 10,000 years ago and only rediscovered in the late 1990's. My wife Santha and I will be visiting Gobekli Tepe in September. Now comes news (thanks to Eric Bower and Richard Clarke for sending me the link to the following story that appeared today in the Sydney Morning Herald and the Melbourne Age) of a radical redating of Gunung Padang, an eerie megalithic site in West Java, Indonesia. The site was originally discovered in 1914, and has long been typecast by the mainstream as about 3500 years old -- a date that does not challenge the conventional paradigm. However, new research on the site by Dany Hilman, senior Geologist at Indonesia's Centre for Geotechnical Research, completely overturns this orthodox view. "It's older than 9000 years," says Hilman "and could be up to 20,000". Naturally the mainstream is already fighting back and seeking to discredit Hilman and his team, but we have been seeing these sort of tactics since my friends John Anthony West and geologist Robert Schoch first questioned the orthodox dating of the Great Sphinx of Giza back in 1992. Little by little the evidence that discredits the mainstream timeline is piling up -- first the Sphinx, then Gobekli Tepe, now Gunung Padang and all of this in context of a gigantic global cataclysm between 13,000 and 12,000 years ago that honest scientists can no longer seriously deny. The policemen of the intellect may not be able to maintain their stranglehold on the past for very much longer. Here is the Gunung Padang story in the Sydney Morning Herald:

http://www.smh.com.au/world/digging-for-the-truth-at-controversial-megalithic-site-20130726-2qphb.html.
And here's the same story in the Melbourne Age:
http://www.theage.com.au/world/digging-for-the-truth-at-controversial-megalithic-site-20130726-2qphb.html.
Here is a link to an earlier relevant piece that I wrote on Facebook:
https://www.facebook.com/Author.GrahamHancock/posts/10151781169707354.

Digging for the truth at controversial megalithic site

It's been raining at Gunung Padang, and the grass on the mountain's precipitous eastern slope is slick with water and mud.

But geologist Danny Hilman, is undeterred. While others slip and fall around him, he trudges expertly down this hill tucked away among the volcanoes 120 kilometres south of Jakarta to show off two big holes he's dug.

Since Dutch colonists discovered it in 1914, Gunung Padang has been known (though not widely) as the largest of a number of ancient megalithic sites in Indonesia.

Here our prehistoric forebears, moved by the area's strikingly shaped columns of volcanic rock, built terraces into the mountaintop and arranged and stacked the stones for whatever indiscernible purpose motivated them.

And Hilman thinks there is much more to it under the surface. If he's right - and Indonesia's President Susilo Bambang Yudhoyono is enthusiastically encouraging his investigations - then buried beneath the piles of ancient stone is by far the oldest pyramid on the planet.

Hilman says it could predate the next oldest by a dozen millenniums or more, suggesting an advanced ancient civilisation in Java. ''It's older than 9000 [years] and could be up to 20,000,'' Hilman says, as he sits on a fallen column of stone. ''It's crazy, but it's data.''

Hilman, a senior geologist at Indonesia's Centre for Geotechnical Research, believes that most of this 100 metre hill is actually man-made, built up on three stages over the millenniums by three different cultures.

If he is correct the find would rewrite prehistory in the same way as the discovery of a mini-human ''hobbit'' on the eastern Indonesian island of Flores rewrote paleoanthropology. The idea is being pushed by Hilman and a former activist turned politician, and member of Yudhoyono's Democratic Party, Andy Arif.

In May, Hilman, who holds a PhD from the California Institute of Technology, was summoned to brief Yudhoyono on his findings. The President was so impressed that he appointed a government taskforce to investigate further, while Arif and Hilman continued with their work. President Yudhoyono urged haste, describing the team's work as a ''task of history … of important value for humanity''. He even offered the services of the army's earth-moving equipment.

Proving the authenticity of these ancient ruins among the banana palms and tea plantations of Cianjur has taken on the aura of a nationalistic quest.

A test being conducted on this day is one in a series of geo-electric surveys. Men in gumboots arrange long loops of yellow cable on huge columnar rocks denuded of their topsoil.

Hilman stands on the muddy edge and points out what he says are patterns in the arrangement of the rocks. These patterns reflect the geological testing already undertaken, he says - that stones usually found upright have been laid horizontally on beds of gravel. Some are stuck together by an ancient form of glue, he says. These have been carbon dated indicating the sites are well in excess of 9000 years old, he says.

Below this are walls he describes as rooms, internal steps and terraces, all evidence of a massive building, of human intelligence and planning.

''The structure of the building is very good, it's been defined by many lines of the geo-electric surveys, even 3D, even GPR [ground-penetrating radar] … and core samples,'' Hilman says. ''We conclude that the archaeological site, the arrangement of these columnar joints, has laminated the entire hill so it's 100 metres thick. We also think it's not just one layer of building, but multiple layers.'' They may have discovered archaeological human structures or features to a depth of at least 15 metres.

''It's huge,'' Hilman says. ''People think the prehistoric age was primitive, but this monument proves that wrong.''

But these views are loudly disputed. A petition signed in April by 34 Indonesian archaeologists and geologists and submitted to Yudhoyono agrees that the upper part of Gunung Padang is ''the largest megalithic structure in south-east Asia'', but the experts are deeply suspicious of the Arif team's methods and motives, and the geological flag-waving it is trying to invoke.

The petitioners do not like Arif's ''plans to involve common people as volunteers to support the 'the Red and White Glory Operation in Gunung Padang' which they call 'research'''. Red and white are the colours of the Indonesian flag. ''This activity is carried out without scientific norms of conservation knowledge,'' the petitioners say. They believe the excavation threatens the preservation of the existing site, and hint strongly that archaeologists, as opposed to geologists, should be involved. One of them, vulcanologist Sutikno Bronto, says Gunung Padang is simply the neck of a nearby volcano, not an ancient pyramid.

''Danny Hilman is not a vulcanologist. I am,'' he says. As for the carbon-dated cement between the stones, on which Hilman relies for his claims about the age of the site, Sutikno believes it is simply the byproduct of a natural weathering process, ''not man-made''.

Other sceptics are even tougher. One archaeologist, who does not wish to be named since the President took such an interest, says the presidential taskforce is deluding itself.

''In the Pawon cave in Padalarang [about 45 kilometres from Gunung Padang], we found some human bones and tools made of bones about 9500 years ago, or about 7000 BCE. So, if at 7000 BCE our technology was only producing tools of bones, how can people from 20,000 BCE obtain the technology to build a pyramid?'' the archaeologist asks.

''In archaeology we usually find the 'culture' first … Then, after we find out the artefact's age we'll seek out historical references to any civilisation which existed around that period. Only then will we be able to explain the artefact historically. In this case, they 'found' something, carbon-dated it, then it looks like they created a civilisation around the period to explain their finding.''

If the ancient civilisation of Gunung Padang is, indeed, a credulist's dream, it would not be the first time the Indonesian President has been seduced by a beautiful illusion. In 2008, a confidence man promised to power Indonesia with ''blue energy'' - fuel made only from water. Yudhoyono allocated $1.2 million to the project and visited the centre three times before its proponent simply disappeared, later turning up in hospital, his idea in tatters.

Hilman, though, is undeterred. He is certain in his research, though he knows he still has some convincing to do.

''It's a strong case but not an easy case. We are up against the world's belief.''