Detroit Bail in of Pensioners 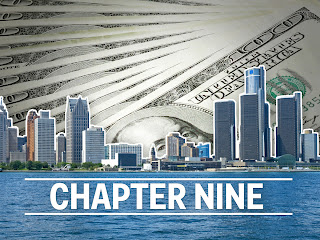 The USA has created serious problems for itself in terms of the various laws put in place  to protect the super banks who have simply taken everyone to the wall and said ‘or else’.  It really cannot stand.

The market will respond by shunning the super banks and creating local institutions able to do all of it.  In the process this will also curb union power which is bent on the same behavior as our super banks.

What everyone has learned the hard way is that when the government is actually the lender and equity source of last resort, it is really stupid to allow overconcentration.  Too big to fail has come to possibly mean that a bad bet by a US  Bank in the third world will be backstopped by the US fed.  This cannot possibly be but that is what the selling of US mortgage backed securities became when the criminal got loose..

The Detroit Bail-In Template: Fleecing Pensioners to Save the Banks

Bank of America Corp. and UBS AG have been given priority over other bankruptcy claimants, meaning chiefly the pensioners, for payments due on interest rate swaps they entered into with the city. Interest rate swaps – the exchange of interest rate payments between counterparties – are sold by Wall Street banks as a form of insurance, something municipal governments “should” do to protect their loans from an unanticipated increase in rates. Unlike ordinary insurance, however, swaps are actually just bets; and if the municipality loses the bet, it can owe the house, and owe big. The swap casino is almost entirely unregulated, and it is a rigged game that the house virtually always wins. Interest rate swaps are based on the LIBOR rate, which has now been proven to be manipulated by the rate-setting banks; and they were a major contributor to Detroit’s bankruptcy.

Derivative claims are considered “secured” because the players must post collateral to play. They get not just priority but “super-priority” in bankruptcy, meaning they go first before all others, a deal pushed through by Wall Street in the Bankruptcy Reform Act of 2005. Meanwhile, the municipal workers, whose pensions are theoretically protected under the Michigan Constitution, are classified as “unsecured” claimants who will get the scraps after the secured creditors put in their claims. The banking casino, it seems, trumps even the state constitution. The banks win and the workers lose once again.

Systemically Dangerous Institutions Are Moved to the Head of the Line

The argument for the super-priority of derivative claims is that nonpayment on these bets represents a “systemic risk” to the financial scheme. Derivative bets are cross-collateralized and are so inextricably entwined in a $600-plus trillion house of cards that the whole financial scheme could go down if the betting scheme were to collapse. Instead of banning or regulating this very risky casino, Congress has been persuaded by the masterminds of Wall Street that it needs to be preserved at all costs.

The same tortured logic has been used to justify the fact that the federal government deigned to bail out Wall Street but not Detroit. Supposedly, the mega-banks pose a systemic risk and Detroit doesn’t. On July 29th, former Obama administration economist Jared Bernstein pursued this line of reasoning on his blog, writing:

[T]he correct motivation for federal bailouts — meaning some combination of managing a bankruptcy, paying off creditors (though often with a haircut), or providing liquidity in cases where that’s the issue as opposed to insolvency – is systemic risk. The failure of large, major banks, two out of the big three auto companies, the secondary market for housing – all of these pose unacceptably large risks to global financial markets, and thus the global economy, to a major industry, including its upstream and downstream suppliers, and to the national housing sector.

Because a) there’s not much of a case that Detroit is systemically connected in those ways, and b) Chapter 9 of the bankruptcy code appears to provide an adequate way for it to deal with its insolvency, I don’t think anything like a large scale bailout is forthcoming.

Detroit’s bankruptcy poses no systemic risk to Wall Street and global financial markets. Fine. But it does pose a systemic risk to Main Street, local governments, and the contractual rights of pensioners. Credit rating agency Moody’s stated in a recent report that if Detroit manages to cut its pension obligations, other struggling cities could follow suit. The Detroit bankruptcy is establishing a template for wiping out government pensions everywhere. Chicago or New York could be next.

There is also the systemic risk posed to the municipal bond system. Bryce Hoffman, writing in The Detroit News on July 30th, warned:

Detroit’s bankruptcy threatens to change the rules of the municipal bond game and already is making it more expensive for the state’s other struggling towns and school districts to borrow money and fund big infrastructure projects.

In fact, one bond analyst told The Detroit News that he has spoken to major institutional investors who have already decided to stop, for now, buying any Michigan bonds.

The real concern of bond investors, says Hoffman, is not the default of Detroit but the precedent the city is setting. General obligation municipal bonds have always been viewed as a virtually risk-free investment. They are unsecured, but bondholders have considered themselves protected because the bonds are backed by the “unlimited taxing authority” of the government that issued them. Detroit, however, has shown that the city’s taxing authority is far from unlimited.  It already has the highest property taxes of any major city in the country, and it is bumping up against a ceiling imposed by the state constitution. If Detroit is able to cut its bond debt in half or more by defaulting, other distressed cities are liable to look very closely at following suit.
Hoffman writes:

The bond market is warning that this will make Michigan a pariah state and raise borrowing costs — not just for Detroit and other troubled municipalities, but also for paragons of fiscal virtue such as Oakland and Livingston counties.

Gov. Rick Snyder dismisses that threat and says the bond market is just trying to turn Detroit away from a radical solution that could become a model for other struggling cities across America.

Interestingly, Lansing Mayor Virg Bernero, Snyder’s Democratic opponent in the last gubernatorial race, proposed a solution that could have avoided either robbing the pensioners or scaring off the bondholders: a state-owned bank. If the state or the city had its own bank, it would not need to borrow from Wall Street, worry about interest rate swaps, or be beholden to the bond vigilantes. It could borrow from its own bank, which would leverage the local government’s capital into credit, back that credit with the deposits created by the government’s own revenues, and return the interest to the government as a dividend, following the ground-breaking model of the state-owned Bank of North Dakota.

There are other steps that need to be taken, and soon, to prevent a cascade of municipal bankruptcies.  The super-priority of derivatives in bankruptcy needs to be repealed, and the protections of Glass Steagall need to be restored. While we are waiting on a very dilatory Congress, however, state and local governments might consider protecting themselves and their revenues by setting up their own banks.

Ellen Brown is an attorney, president of the Public Banking Institute, and author of twelve books, including the best-selling Web of Debt and its 2013 sequel, The Public Bank Solution. Her websites are

oh the poor detroit civil servants.
All you really need to know about Detroit, which is facing a $327 million budget gap, is that last year it was discovered to still be paying for a “horseshoer” (or farrier) on the Detroit Water & Sewer Department (DWSD) payroll. This individual costs some $56,000 in pay and benefits, despite the city not having any horses to shoe in his department.

That is over $25.00 per hour to do NOTHING. And he is at the low end. The average DWSD gets over $40.00 per hour. They got that money by engaging in extortion (of the leaders that they elected). Screw em. If they did not save and invest a lot of it, so that they will not starve, well to bad. Screw em. The punishment for stupidity is death. And apparently these civic "servants" were to stupid to realize that "if there ain't none, then no one gets any". News flash. Their ain't none, and no one wants to bail you out.

Have you ever considered writing an ebook or guest authoring on other sites?

I have a blog based on the same subjects you discuss and would really like to have
you share some stories/information. I know my audience would enjoy
your work. If you're even remotely interested, feel free to send me
an e mail.