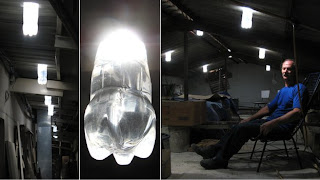 And we cannot take this further?  Every building requires daytime lighting to manage shadow that causes uneven lighting.  Most roofs can work around a simple plastic insert properly sealed.  Thus an interior space can readily be lit using this technology.  It uses no energy and is as easily discarded and replaced.

In this way power can be conserved during daylight hours while enhancing the working environment.

It has now been well tested and demonstrated.  A plastics manufacturer needs to cook up a design package that works well enough.  It should be easy.  At least make up a collar tile for all these soda bottles.  A rubber washer and the water bottle will go no where.

Alfredo Moser's invention is lighting up the world. In 2002, the Brazilian mechanic had a light-bulb moment and came up with a way of illuminating his house during the day without electricity - using nothing more than plastic bottles filled with water and a tiny bit of bleach.
In the last two years his innovation has spread throughout the world. It is expected to be in one million homes by early next year.

So how does it work? Simple refraction of sunlight, explains Moser, as he fills an empty two-litre plastic bottle.

"Add two capfuls of bleach to protect the water so it doesn't turn green [with algae]. The cleaner the bottle, the better," he adds.

Wrapping his face in a cloth he makes a hole in a roof tile with a drill. Then, from the bottom upwards, he pushes the bottle into the newly-made hole.

"You fix the bottle in with polyester resin. Even when it rains, the roof never leaks - not one drop."

"An engineer came and measured the light," he says. "It depends on how strong the sun is but it's more or less 40 to 60 watts," he says.

Refraction is the bending of light, which is caused by a change in its speed

In the case of the "Moser lamp", sunlight is bent by the bottle of water and spread around the room

The inspiration for the "Moser lamp" came to him during one of the country's frequent electricity blackouts in 2002. "The only places that had energy were the factories - not people's houses," he says, talking about the city where he lives, Uberaba, in southern Brazil.

Moser and his friends began to wonder how they would raise the alarm, in case of an emergency, such as a small plane coming down, imagining a situation in which they had no matches.

His boss at the time suggested getting a discarded plastic bottle, filling it with water and using it as a lens to focus the sun's rays on dry grass. That way one could start a fire, as a signal to rescuers. This idea stuck in Moser's head - he started playing around, filling up bottles and making circles of refracted light.

Soon he had developed the lamp.

"I didn't make any design drawings," he says.

"It's a divine light. God gave the sun to everyone, and light is for everyone. Whoever wants it saves money. You can't get an electric shock from it, and it doesn't cost a penny."

Moser has installed the bottle lamps in neighbours' houses and the local supermarket.

While he does earn a few dollars installing them, it's obvious from his simple house and his 1974 car that his invention hasn't made him wealthy. What it has given him is a great sense of pride.

How much energy do the lamps save?

The plastic bottles are up-cycled in the local community, so no energy is needed to gather, shred, manufacture and ship new bottles

The carbon footprint of the manufacture of one incandescent bulb is 0.45kg CO2

"There was one man who installed the lights and within a month he had saved enough to pay for the essential things for his child, who was about to be born. Can you imagine?" he says.

Carmelinda, Moser's wife of 35 years, says her husband has always been very good at making things around the home, including some fine wooden beds and tables.

But she's not the only one who admires his lamp invention. Illac Angelo Diaz, executive director of the MyShelter Foundation in the Philippines, is another.

"We had huge amounts of bottle donations," he says.
4

Following the Moser method, MyShelter started making the lamps in June 2011. They now train people to create and install the bottles, in order to earn a small income.

In the Philippines, where a quarter of the population lives below the poverty line, and electricity is unusually expensive, the idea has really taken off, with Moser lamps now fitted in 140,000 homes.

The idea has also caught on in about 15 other countries, from India and Bangladesh, to Tanzania, Argentina and Fiji.

Diaz says you can find Moser lamps in some remote island communities. "They say, 'Well, we just saw it from our neighbour and it looked like a good idea.'"

Light to work in Bangladesh

Most homes and businesses in the slums of Dhaka have no power and no windows, so 80-90% of them hook up to electricity lines illegally - and fall back on candles or kerosene lamps during regular blackouts.

A voluntary organisation called Change began distributing the bottle light, or botul bati, earlier this year. It's helped hundreds of people - including sari makers and rickshaw repairers - whose livelihoods depend on having sufficient light.

There were teething problems. "Some people said they felt poorer after installing a bottle light," says Change founder Sajid Iqbal. The group counters this by stressing that each one helps tackle climate change.

Unlike some other charities, Change charges a small amount for the lights - roughly the price of 2-3kg of rice. "If you give the light for nothing, people don't maintain them," Iqbal says. "They don't understand their value."

People in poor areas are also able to grow food on small hydroponic farms, using the light provided by the bottle lamps, he says.

Overall, Diaz estimates, one million people will have benefited from the lamps by the start of next year.

"Alfredo Moser has changed the lives of a tremendous number of people, I think forever," he says.

"Whether or not he gets the Nobel Prize, we want him to know that there are a great number of people who admire what he is doing."

Did Moser himself imagine that his invention would have such an impact?

"I'd have never imagined it, No," says Moser, shaking with emotion.

"It gives you goose-bumps to think about it."

Alfredo Moser spoke to Outlook on the BBC World Service. Listen to the interview via BBC iPlayer Radio or browse the Outlook podcast archive.