Egypt's Rape Culture and Its Exploitation 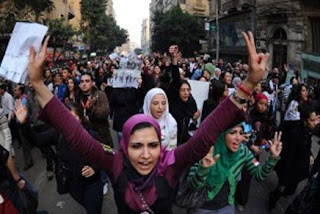 The horror of this part of the Islamic world continues to be a religious order that effectively eggs on barbarism.  If I saw a dozen religious leaders out there acting in protection of the women, I would say otherwise, but once again the culture speaks loudest in its silences.  Where is the united Islamic front against 9/11 and all forms of terrorism generally?

Natural human rights are systematically demolished and anyone and everyone is subject to a culture of barbarous confrontation.   Why are we been asked to tolerate and even accept this at all?

To impose a solution on an Islamic culture is tempting in theory, but elusive in execution.  The only way out that I can see is to establish women as the sole holder of family credit.  This instantly turns over the super male dominant ideology that is obviously accepted aqnd outright enforced.

Egypt's Rape Culture and Its Exploitation

In Egypt, as well as in the West, outrage over rampant sexual assault has too often been about political agendas rather than concern for the actual victims, notes Anna Lekas Miller.

Since the most recent wave of protests began in Tahrir Square on June 30, there have been 186 recorded sexual assaults—including eighty the night that former President Mohamed Morsi was overthrown. Many of these attacks are mob-style sexual assaults, often involving between fifty and 100 assailants, in which a woman is surrounded, stripped, groped and in some cases beaten and gang-raped until she needs medical attention. And in some recent cases, women were attacked and penetrated with knives and other weapons.

In Egypt, they call this the “Circle of Hell.”

“These men attack women because they know they can get away with it,” said Yasmine, an Egyptian activist who doesn’t wish to give her last name.

Many of the women surveyed agree that sexual violence has gotten worse since former President Hosni Mubarak was overthrown. Up until the most recent wave of protests, during which the Muslim Brotherhood pointed to sexual assaults in Tahrir Square in an attempt delegitimize anti-government opposition, the rampant attacks that happened under President Morsi’s leadership have gone largely ignored.

According to a recent survey from UN Women, 99.3 percent of all Egyptian women report being sexually harassed, and 91.5 percent have experienced unwelcome physical contact. The country has three laws in the penal code that address sexual harassment, assault and rape—and though the punishments range from fines to imprisonment, including life sentences and the death penalty, these laws are rarely enforced. Instead, most women are discouraged from reporting their sexual assaults to the authorities. For most, the high risk of shame and humiliation in publicly outing oneself as a sexual assault survivor—and the assumption that one is tainted or, if unmarried, now unfit for marriage—far exceeds the likelihood that the assailant will be held accountable.

Like in the West, women’s attire is often blamed for attacks, particularly Western-style clothing that many conservative Egyptians claim attracts assailants and in some cases even justifies rape. According to a 2008 survey with the Egyptian Center for Women’s Rights, 53 percent of all men believe that a woman invites harassment through what she is wearing. Many of the women surveyed agree.

Despite these stereotypes, a woman’s clothing doesn’t have much bearing on the likelihood of an attack. One of the most famous photographs of the recorded history of Egypt’s sexual assault epidemic is of a woman sprawled on the floor in only her blue bra, her traditional niqab veil ripped and shredded next to her after her attack.

Although sexual harassment has always been widespread in Egypt, it is only recently that the word “taharrush,” meaning “harassment” in Egyptian Arabic, has come into the popular lexicon. Before that, the word, “mu’aksa” meaning “flirtation” was used to describe these advances—even when they were nonconsensual. And under the leadership of President Mohammed Morsi and the Muslim Brotherhood, Egypt’s rape culture has only become more entrenched.

For instance, after a wave of sexual assaults in Tahrir Square during the November 2012 demonstrations, several members of the Human Rights Committee of the Shura Council—the upper house of Parliament which, under Morsi’s administration, held significant legislative powers—openly stated that women were “100 percent” responsible for their rapes by placing themselves in “such circumstances”—in other words, being in the square. Abu Islam, a prominent Islamic cleric and popular Egyptian television guest, expressed a similar view when he claimed, on national TV, that blaming a man for committing sexual assault was akin to “blaming a cat for eating meat that was left out.” Reda Al-Hefnawy of the Muslim Brotherhood’s Freedom and Justice Party went so far as to say that the women were to blame for the sexual assaults because they had violated the men’s modesty.

Immediately after the news of the first sexual assaults, a Muslim Brotherhood television channel, Misr 25, began a smear campaign against the protesters, calling them “thugs” and denouncing the way the “revolutionaries” treated women in Tahrir Square. The Brotherhood never once asked what they could do to help the survivors, and condemnation of the assaults was always framed within a condemnation of the anti-Morsi opposition.

The Muslim Brotherhood wasn’t alone in leveraging the attacks for a political agenda. In the West, several commentators jumped on the latest wave of attacks as a means to criticize Islam and Arab culture. American novelist Joyce Carol Oates tweeted: “Where 99.3% of women report having been sexually harassed & rape is epidemic--Egypt--natural to inquire: what's the predominant religion?”

Oates was, of course, referring to Islam—and the fact that between 80 and 90 percent of the Egyptian population identifies as Muslim.

Oates’s tweets — which continued in the same vein — were decried by many as Islamophobic for their correlation of rape culture with religious culture. Her insinuation prompted the question, Does Islam also explain why one in four female college students in the US is sexually assaulted during their college career? Or why one in three female service members are sexually assaulted during their service in the US Army?

In Egypt as well as in the West, prominent responses to the waves of violence against women have failed to address the systematic causes and potential solutions to sexual assault. Instead, Islam itself has been scapegoated in the West, while in Egypt the Muslim Brotherhood has blamed assaults on women’s very presence in the square. And the Special Council of Armed Forces and the interim leadership have remained silent on the assaults—even though they have now been ruling Egypt for over a month.

Although grassroots groups such as Tahrir Bodyguard and Operation Anti-Sexual Harassment (and Assault) have sent volunteers to patrol every demonstration and intervene in potential sexual assaults since their nascence during the November 2012 protests, the number of assaults has multiplied, not decreased. While many women say that these groups’ presence makes them feel safer, these groups are still only protecting women from sexual assault, rather than addressing the root causes—a Band-Aid solution to a much greater problem.

As Egypt struggles under new leadership, Egyptian women, many of whom stood and fought alongside men during every phase of the revolution, are caught in a crossfire where their bodies are physically attacked and then their experience is exploited for political gain or as fodder for Islamophobia. Ultimately, this politicization—whether it is from the Muslim Brotherhood or Islamophobic American writers—is yet another powerful tool in convincing women to stay silent, thus perpetuating the cycle of sexual violence.

Anna Lekas Miller is a former Nation intern and now works as a freelance writer covering Israel/Palestine, the Middle East and Arab-American and women’s issues. Read more of her work on her website www.annalekasmiller.com or follow her on Twitter @agoodcuppa.