A 1000-Year-Old Nordic Spearhead Raises the Question - Were The Vikings in New York? 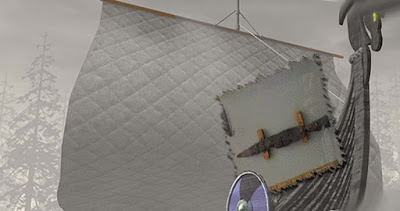 The provenance of this lonely viking spearhead is golden.  It certainly supports the Kensington artifact as well.  From this it becomes clear that viking traders penetrated the Great lakes region by way of the Hudson and surely the St Lawrence.  There is zero indication of permanent settlement but that seems unlikely anyway when they had the entire Atlantic Coast to work with along with the Arctic and even the Pacific Northwest.


What everyone fails to recall is that a viking long boat could be readily manhandled overland if it became useful.  Hard work of course, but scouting a land passage was no problem and your manpower was sufficient to even lift the boat if necessary. thus cutting a portage path and laying down runners is completely plausible.


I have no doubt that the Northwest passage was easily forced by an overland portage over Banks island in the Arctic..

A 1000-Year-Old Nordic Spearhead Raises the Question - Were The Vikings in New York?

A 20th century find suggests that the Vikings may have explored North America as far south as New York. Although the reasons for its presence in Charles Point are contested, no one can deny the fact that the spearhead unearthed by Augustus Hoffman in 1929 is of Nordic origin. With precious little evidence about how or why the artifact ended up in the Great Lakes Region, researchers rely on ancient tales and legends to explain the mystery of the spearhead.

In the summer of 1929, a great storm blew through the Great Lakes Region and caused a great deal of property damage to homes on the shoreline. Hoffman was one of many Charles Point residents whose summer homes had been demolished by the heavy winds and torrential downpours. As he set about rebuilding his home, Hoffman found it difficult to find suitable terrain on which to lay a foundation.

Eventually, a site some 1000 ft. (304.8 m.) away from shore was selected. Hoffman began the laborious work of excavating the solid granite in order to lay pipelines. In the process, he discovered an old relic, much too big to be an arrowhead yet the wrong shape to be a dagger. Alone at the time, he pocketed the artifact, assuming that it was left over from the days when Native Americans roamed these coasts- a not uncommon find in that area.

Yet there was something unique about Hoffman’s find. Whereas Indigenous weaponry is typically made of stone, this artifact was made of iron and thoroughly rusted with age. Hoffman brought his find into town to the banker of Lyons, Saxon B. Gavitt.

Assuming that Hoffman’s find might have some sort of historical value, Gavitt quickly contacted James Curran, the editor of the Sault Daily Star, the local paper. Curran then suggested that they send the artifact to experts at the University of Toronto for analysis.

By 1930, Dr. C.T. Currelly, the curator of the Royal Ontario Museum, pronounced Hoffman’s find as an authentic Norse spearhead, most probably manufactured sometime between the 7th and 12th centuries AD. The experts also treated the iron so that the rusting would stop.

The artifact Hoffman found had a blade that measured 9.25 inches by 0.69 inches (23.5cm by 1.75cm) and a handle of 2.06 inches by 0.88 inches (5.23cm by 2.24cm). It is believed that, in its original form, both the blade and the handle would have been larger. As it stands, they are thoroughly rusted and there is even a small hole worn completely through part of the artifact. But given its design and iron composition, there is little doubt that this spearhead was originally crafted by the Vikings.

Stories from the Sagas

The suspected date of the spearhead, 600-1100 AD, fits neatly with the widely acknowledged time period of Viking exploration of the North American coastline. According to Norse sagas, Vikings first arrived in the New World in 986 when Bjarni, son of Herjulf, came upon a beautiful wooded area of present day Canada.

The Graenlendinga Saga relates how Bjarni came to this wonderful land after getting lost in a dense fog while sailing from Iceland to Greenland. The legend describes the area as “not mountainous but well wooded and with low hills.” (It must be remembered that 1,000 years ago, the climate of Canada was much warmer than it is today.)

Graphical description of the different sailing routes to Greenland, Vinland (Newfoundland), Helluland (Baffin Island) and Markland (Labrador) travelled by different characters in the Icelandic Sagas, mainly Saga of Eric the Red and Saga of the Greenlanders. Modern English versions of the Norse names. (CC BY SA 3.0)

Leif Erikson and Other Explorers in Vinland

Enchanted by the tales of this bountiful land, Leif Erikson, son of Eric the Red of Greenland, set sail from Greenland with a crew of 35 men. Leif did his best to retrace the steps of Bjarni but a violent storm threw the Vikings off course.

Hopelessly adrift, Leif decided to enact the Norse emergency custom of wayward sailors: to release a raven. It is well known that birds will always seek to return to land. Thus, the crew carefully watched the bird as it flew off. If it returned, there was no land about. But, if after several hours the raven had not come back, it meant that the bird had found land. This occurred with the raven Leif sent forth, so his crew set sail in the direction they had last seen the raven flying.

Within a few hours, they sighted land - but it was not the beautiful bountiful land described by Bjarni. Rather it was a “flat and stony land,” perhaps modern-day Baffin Island. They continued to explore the southern coast until they came upon a land with many tress, wild grapes, and grains. Leif named this area Vinland.

Although Leif returned to Greenland, numerous other Viking exploration parties set out to explore the new world and even established a few colonies. However, the sagas of their explorations are incomplete; today we only have a few chapters of the rich ancient stories.

The spearhead found by Augustus Hoffman is not the only ancient Viking artifact found further south than expected. Other relics have been uncovered in Minnesota, Wisconsin, and Ontario. Yet all of these finds are similar in nature to Hoffman’s, that is to say, small artifacts rather than settlements. This suggests that the Vikings did not actually explore so far south but traded their wares with the local native populations instead.

The Sagas clearly indicate that Vikings explored the new land during the summer months for several years. However, where the Norsemen ventured cannot be ascertained from the legends that remain today. Unless a large cache of artifacts or the foundations of a Norse building can be found, archaeologists will remain skeptical about the presence of Vikings in the United States.

Top Image: The Norse spearhead from Charles Point on an image of a Viking Ship. Source: Historic Sodus Point
By Kerry Sullivan
References