What In The World is This Animal In Bloomfield Township? 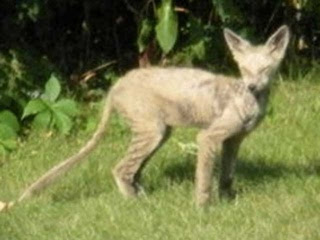 After this weekend’s picture of the alleged dead Chupacabra we have this set of photos.  What I am seeing is a fox that has shed its outer coat.  Notice the thinness of the tail and how the lack of fur lets the ears look larger.  It may even be a coyote but fox seems more likely.

Has the warm summer around the northern Hemisphere brought on a wave of shedding?  Possibly, since we are seeing more than one case.  The full molt argues against a simple skin disease which would show partial shedding.

One of these corpses that are in hand needs to be properly identified and we have plenty of biologists with the skills.

The Chupacabra appears to be a rare unrecognized vampire bat having the same mass as one of these foxes.  We actually have two unusual animals scaring the chickens.

What In The World is This Animal In 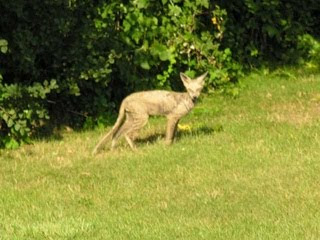 ((MyFoxDetroit.com Staff)) - Do you know what this is?  Joel from says this animal started showing up in his backyard yesterday.
He took a few photos and sent them to us to help identify the animal.  Please scroll through them.  We've sent them off to Veterinarian but until we hear back, what's your call?
Add your ideas in the comment box below.  We'll post the answers from the experts once we get them.  See if you're right.
UPDATE: Some quick research has our staff thinking it's a mangy fox or a coyote. Still, what do you think?
From James we have
This animal is showing up all over the States... many of the nudnicks are calling it el chupacabra, okay... My thought is that there is more genetic splicing and cloning being done then we will ever know. For these things to be showing up all over the States, I don't know, just a bit too coincidental if you ask me.
If you think that there aren't Dr Frankenstein's out there as well as fully funded Government labs making new and trying to revive old animals you living with your head in the sand.
Every time they get a dead one they send it off for DNA testing and we never ever here anything about it again... it's also why when archeologists find anomalous artifacts the objects seem to vanish.... things like a 8000 year old human femur bone that is four feet long... or modern type tools embedded in coal a mile under the earth...fossilized modern human footprints that are right next to dinosaur footprints...
If you find these thing fascinating as I do, pick up "Forbidden Archeology" by Michael Cremo. It's a HUGE book and it will blow your mind to what they are hiding from us so not to upset the fake made up history that we have been fed and brainwashed to believe. Let's hold them to the DNA testing of these things, if it's a fox or a coyote I want to know. 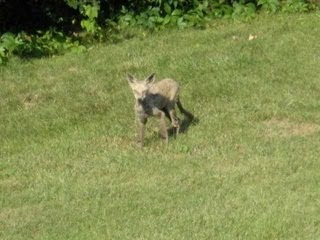 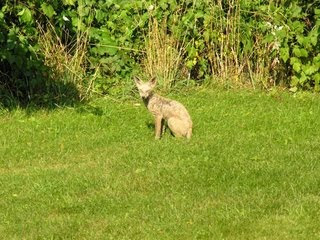 And for a comparison, here is a fully furred fox with his bushy tail 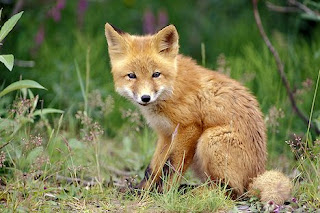 My wife actually raised a fox for twelve months. She confirms that the hind legs are far too muscular for a fox. So we really have a fox like creature that is adapted to run down jack rabbits and the like.