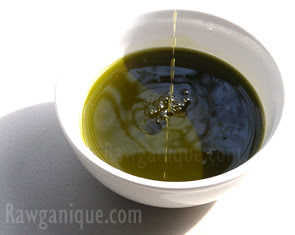 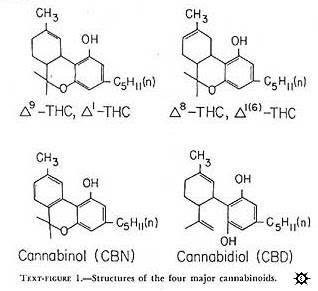 All occur naturally in marihuana and were chemically synthesized. These drugs were provided by the National Institute on Drug Abuse or the Sheehan Institute for Research, . In the preparation of the drugs, the cannabinoids were complexed to albumin or solubilized in Emulphor-alcohol. Both preparations produced similar antitumor activity. With albumin, the cannabinoids were prepared in the following manner: A stock solution of 150 mg cannabinoid per ml absolute ethanol was made. Six ml of this solution was placed in a 200-ml flask. The ethanol was evaporated off under a stream of nitrogen and 2,100 mg lyophilized bovine serum albumin (BSA) added. After the addition of 20 ml distilled water, the substances were stirred with a glass rod in a sonicator until a good suspension was achieved. Sufficient distilled water was the aldded to make the desired dilution.
Concentrations were routinely checked with a gas chromatograph. When Emulphor-alcohol was used as the vehicle, the desired amount of cannabinoid was sonicated in a solution of equal volumes by absolute ethanol and Emulphor (El-620; GAF Corp., New York, N.Y.) and then diluted with 0.15 N NaCL for a final ratio of 1: 1: 4 (ethanol: Emulphor: NaCL).
Results
Effects of Cannabinoids on Murine Tumors
Delta-9-THC, delta-8-THC, and cannabinol (CBN) all inhibited primary Lewis lung tumor growth, whereas cannabidiol (CBD) enhanced tumor growth.
Oral administration of 25, 50, or 100 mg delta-9-THC/kg inhibited primary tumor growth by 48, 72, and 75% respectively, when measured 12 days post tumor inoculation (table 1).
http://www.ukcia.org/research/AntineoplasticActivityOfCannabinoids/table1.jpg

On day 19, mice given delta-9-THC had a 34% reduction in primary tumor size. On day 30, primary tumor size was 76% that of controls and only those given 100 mg delta-9-THC/kg had a significant increase in survival time (36%). Mice treated with a delta-9-THC showed a slight weight loss over the 2-week period (average loss, 0.3 g at 50 mg/kg and 0.1 g at 100 mg/kg). This can be compared to cyclo-ohosphamide, which caused weight loss approaching 20% (table 2).
http://www.ukcia.org/research/AntineoplasticActivityOfCannabinoids/table2.jpg

Delta-8-THC activity was similar to that of delta-9-THC when administered orally daily until death (table 2). However, as with delta-9-THC, primary tumor growth approached control values after 3 weeks. When measured 12 days post tumor inoculation, all doses (50-400 mg/kg) of delta-8-THC inhibited primary tumor growth between 40 and 60%. Significant inhibition was also seen on day 21, which was comparable to cyclophosphamide-treated mice. Although this was not the optimum regime for cyclophosphamide, it was the positive control protocol provided by the NCI (11). All mice given delta-8-THC survived significantly longer than controls, except those treated with 100 mg/kg. Mice given 50, 200, and 400 mg/kg delta-8-THC had an increased life-span of 22.6, 24.6, and 27.2%, respectively, as compared to 33% for mice treated with 20 mg cyclophosphamide/kg. Pyran copolymer, an immunopotentiator (12) when administered at 50 mg/kg, also significantly increased the survival time of the animals (39.3%).
CBN, administered by gavage daily until death, demonstrated antitumor activity against the Lewis lung carcinoma when evaluated on day 14 post tumor inoculation (table 3).
http://www.ukcia.org/research/AntineoplasticActivityOfCannabinoids/table3.jpg

In this experiment, CBD-treated mice showed enhanced primary tumor growth. However, the control tumor growth rate in this experiment was decreased as compared to the previous studies.
Survival time of BDF 1 mice hosting L1210 leukemia was not prolonged by delta-9-THC treatment (table 5).
http://www.ukcia.org/research/AntineoplasticActivityOfCannabinoids/table5.jpg 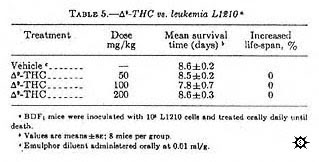 Mice treated with delta-9-THC at doses of 50, 100, and 200 mg/kg administered orally daily until death, survived 8.5, 7.8, and 8.6 days, respectively, as compared to 8.6 days for mice treated with the diluent. However, delta-9-THC inhigited FLV-induced splenomegaly by 71% at 200 mg/kg as compared to 90.2% for the positive control actinomycin D (0.25 mg/kg). Although there was a dose-related inhibition, only the high dose was statistically significant (table 6).
http://www.ukcia.org/research/AntineoplasticActivityOfCannabinoids/table6and7.jpg 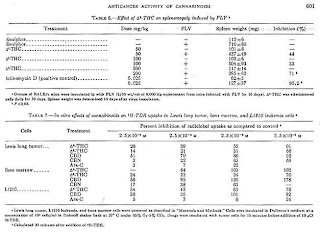 Effect of Cannabinoids on Isolated Cells In Vitro
Isolated cells incubated in vitro represent a simple, reliable, and, hopefully, predictive method for the monitoring of the effects of agents on several biochemical parameters at the same time. The incorporation of 3H-TDR into TCA-precipitable counts in isolated Lewis lung cells is shown in text-figure 2. Similar types of curves were seen for bone marrow and L1210 cells. In all instances, for 15-45 minutes there was a linear increase in 3H-TDR uptake into the TCA-precipitable fraction. Qualitatively, similar data (not shown) were seen after a pulse with 14C-uridine. Actinomycin D (1 mcg/ml) preferentially inhibited 14C-uridine incorporation after uridine uptake had decreased to less than 30% that of control (data not shown). This is indirect evidence that we were measuring RNA synthesis.
Experiments (data not shown) done with 5-FU (10 -4 M) indicated that, in isolated bone marrow cells, both thymidine uptake with time by delta-9-THC (10 -5 M) on Lewis lung cells is depicted in text-figure 2.
http://www.ukcia.org/research/AntineoplasticActivityOfCannabinoids/textfigure2.jpg 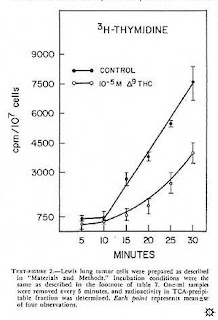