Notes From the Bee Keeping Front 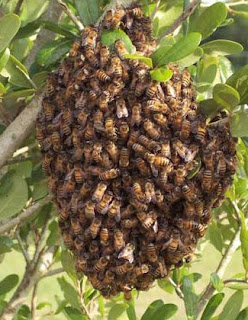 The chronic population problem facing commercial beekeeping has naturally elicited a broad response from many folks.
This work by an experienced beekeeper clarifies how much available cropland needs to be in place.  That it has not been much of a problem until recently is more a response to the collapse that is encouraging the general improvement in husbandry.
I have seen folks push the creation of small open fields of wild flowers and the like.  Again, our enthusiasm for thousand acre fields has not made things easy for either wild flowers or for bees.
We are not going to return to the traditional mixed farm that had none of these issues, not so much because anything was planned for but because many acres were occupied as fence rows and waste land, all of which harbored mature wild.
We do have to consciously set aside wilds in which natural cover is promoted and rarely exploited.  We are vacating uneven ground that is very suitable for this and building woodlands will help.
The present problem is that efforts are uncoordinated and needs to be better planned and cooperated on.  I have posted on valley management for woodlands and this thinking naturally extends to bee husbandry.
How Much Land Does It Take to Feed a Bee Colony? More Than You Think
Kim Flottum
you are viewing posts from


http://www.thedailygreen.com/environmental-news/blogs/bees/
June 24, 2010 at 12:33pm By Kim Flottum |
There's a lot going around about the ties between honey bee nutrition and Colony Collapse Disorder. Some of it is going around because I have been preaching this gospel for years now, and finally some are beginning to listen. Of course I'm not the only one... I just happen to have more places to preach than most people, so I get heard more.
But the question remains: how much does it take to feed a honey bee colony? It's not like I can go to the store and simply get a bag of Purina Honey Bee Chow... although beekeepers do feed their bees protein supplements on occasion. But even the best of these – and for the most part the formulas are secrets – are only short term fixes for a short term lack of food... sort of like that Power Bar thing you bring along on bike rides or hikes. Don't read the ingredients 'cause you don't want to know: Even though it tastes like sawdust and cardboard, it's filling and good for you, says the label. That's pretty much what honey bee chow is to a honey bee, too.


Mostly, beekeepers feed bees when there's nothing else for bees to eat, and beekeepers want their bees to be raring to go before a crop blooms. That's a key beekeeping secret: have lots of bees in your hives before the bloom, so those lots of bees can gather lots of nectar and pollen. If you let them raise lots of bees on that bloom, like they are programmed to do, then when the bloom is over you have lots and lots of bees, and they eat all the honey they just made. For a beekeeper, that's not a good plan.
But how much do bees eat? Well, the rule of thumb is that it takes an acre of flowers to feed a colony of bees. But that's a constant acre of bloom to feed a colony of bees, not just a field of dandelions blooming in May then gone and the bees have enough for the rest of the year. Nope, doesn't work that way.
Bees need that blooming acre as early in the season as possible... say, January in the far south, March in the mid-section, and April in the north. And that bloom usually comes in the form of trees: Willows, maples and the like. There are about 40 full-sized trees on an acre. For one colony. That's about a million blossoms, by the way.
But trees quit after a week or two and the bees are still eating. Then, under the trees, come dandelions for a week or so, but then what? Where do the bees go then? To other trees maybe, on another acre somewhere. Black Locust trees are wonderful, if it doesn't rain during bloom, then tulip poplar maybe, then basswoods. Meanwhile on some other acre white clover starts to bloom, then the alfalfa in that farmer's field nearby. By late summer a strong, healthy colony of bees have burned through about 20 or so acres of blossoms. I'm going to talk more about nutrition, lots more because it has become very, very apparent that more needs to be said.
But for now, in case you can't picture an acre... it's the size of a football field without the end zones. And by the end of this month a colony of bees will have eaten 20 of them (maybe more), each full of flowers.

Read more:
http://www.thedailygreen.com/archives/environmental-news/blogs/bees/by_author/5403/15;1#ixzz0s5S3v5ia
Posted by arclein at 5:17 AM