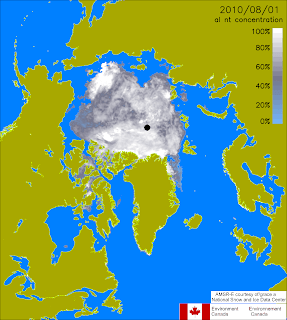 Here again is the sea ice map.  The Western end of is presently blocked, but could be quickly cleared with a change of wind. Clearance of the passage presently looks iffy this year.
http://www.socc.ca/cms/en/socc/seaIce/currentSeaIce.aspx
The North East passage looks only slightly blocked in one locale and should be passable even now.  The rest is wide open.
Two large regions of multi year ice are transiting into the and are not expected to survive as they would normally.
The wind is not concentrating the ice, so we are not likely to surpass the 2007 areal low.  However, everything I see supports the ongoing reduction of total ice mass.  Submarine surveys done last winter claim the opposite but that is the only contrary evidence out there.
The map shows only a third or so at full ice coverage.  The rest is sitting in open water and has at least a couple of weeks of further melting.  The damage appears to be worse every year as it should at this late stage of progressive decay.
Posted by arclein at 6:25 AM