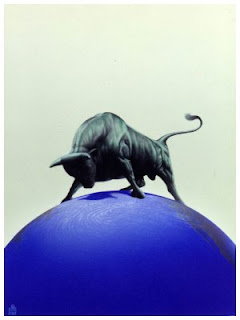 Recent market chatter has had a lot of comment on a second dip recession.  That is all fine except everyone keeps looking for that in the market.  The market has not fully recovered from its 2009 high and that was not a stock market bubble to begin with.  At worst, it is capable of sliding twenty percent and dragging out the process over the next five years before definitely turning upward.
The reason is that the true market that is grinding up the economy is the shrunken housing market.  Or perhaps more accurately it is the slowly contracting mortgage market.  The reality is that the banks can not unload their inventory of failed mortgages and must slowly replace lost capital.
All this is weakening the capital markets and nothing has been done to resolve the problem except to pretend it is going away.  A conference recently began to explore possible fixes to the problem and that is a bit of way too late and far too clueless.  Two years ago might have been a good idea.
A real double dip would be seen as a nasty drop in housing prices across the board as institutions holding properties throw in the towel and begin to simply dump inventory at ever declining prices just to raise cash.  I do not think that is going to happen because there is simply no real market to sell much into and what we have instead is a zombie market that drains banking liquidity.
The solution is to jump start the housing market by changing foreclosure laws in such a way that it becomes attractive to bail out the foreclosed by harnessing their support.
The current system has worked so long as foreclosures were always at around half a percent of the market.  At thirteen percent the system as it stands has proven to be profoundly stupid.  How we got there is not the issue today.  How to get out is the issue.
I have posted in the past over a year ago on the methodology but no one vaguely understands it so it becomes a non starter.
Let it be said that for a decade and more I had my private laboratory in which to create markets with both success and the ability to observe the management and effects of leverage.  I solved the after effects of a credit collapse in a real world setting in such a manner as to at least minimize the damage.  This was done without playing against a collapse and causing it as effectively happened on Wall Street.
Since we are not going to fix it, low prices and zombie portfolios will prevail for several years all of which will strongly suppress consumer disposable income for the duration.  This will obviously lead to lower revenue expectations for US based corporations.
I am not so sure that present markets properly discount that scenario now.
Posted by arclein at 8:46 AM

Until the foreclosed houses are put onto the market and the 'stupid lenders' lose their so called investments, we can not recover.

Lower prices are the solution and ruthless, quick foreclosures and bankruptcies. Period.

When prices collapse we can start over again.