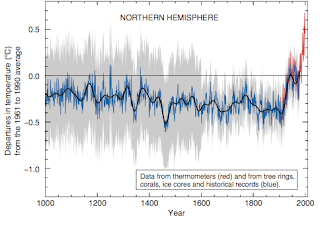 This is further analysis of the infamous attempts by climate scientists to use historical proxies to predict climate.  As I posted form the very beginning of this blog, this was a suspect enterprise if only because the actual variation range during the Holocene is 2 degrees. How do you tell the difference?  The fact is that you do not and end up stacking guess on guess.
The good news is that everyone has sobered up and is applying their skills with great energy.
After reading through all this, it seems likely that we should be able to produce a fine and reliable random number generator from the daily weather data.  This is of some use in digital applications.
New paper makes a hockey sticky wicket of Mann et al 98/99/08
Posted on August 14, 2010 by Anthony Watts
http://wattsupwiththat.com/2010/08/14/breaking-new-paper-makes-a-hockey-sticky-wicket-of-mann-et-al-99/
NOTE: this will be the top post at WUWT for a couple of days, see below for new stories – Anthony
Sticky Wicket – phrase, meaning: “A difficult situation”.
Oh, my. There is a new and important study on temperature proxy reconstructions (McShane and Wyner 2010) submitted into the Annals of Applied Statistics and is listed to be published in the next issue. According to Steve McIntyre, this is one of the “top statistical journals”. This paper is a direct and serious rebuttal to the proxy reconstructions of Mann. It seems watertight on the surface, because instead of trying to attack the proxy data quality issues, they assumed the proxy data was accurate for their purpose, then created a bayesian backcast method. Then, using the proxy data, they demonstrate it fails to reproduce the sharp 20th century uptick.
Now, there’s a new look to the familiar “hockey stick”.
http://wattsupwiththat.files.wordpress.com/2010/08/mcshane-wyner-fig1.png
Before: 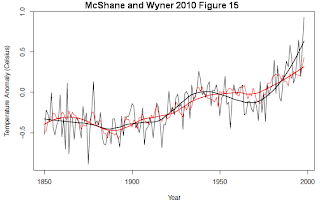 Multiproxy reconstruction of Northern Hemisphere surface temperature variations over the past millennium (blue), along with 50-year average (black), a measure of the statistical uncertainty associated with the reconstruction (gray), and instrumental surface temperature data for the last 150 years (red), based on the work by Mann et al. (1999). This figure has sometimes been referred to as the hockey stick. Source: IPCC (2001).
After:
http://wattsupwiththat.files.wordpress.com/2010/08/mcshane-wyner-fig16.png 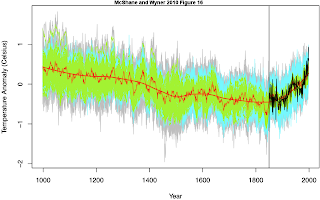