Regular Mobile Use CAN Cause Cancer 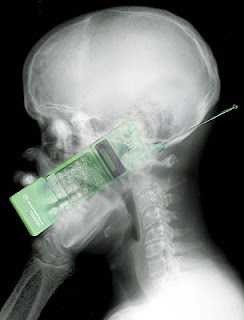 This is obviously not good news.  Although another larger recent study claimed that the link was inconclusive, it was easy to show otherwise.  This report is coming out far more strongly and decisively for a strong linkage and does predict a possible pandemic.
I have been conducting discussions with a company based in who has been in the forefront of producing shielding technologies and am plausibly assured that problem can be counteracted.  Once the problem becomes widely recognized, such technology could be built into the devices.
Before that happens, we are looking at retrofits.  I have presently retrofitted my own cell phone with such a device.  In short, it is time to get somewhat concerned.
It is also obvious that the industry has been busy suppressing bad data, just as was done by the cigarette industry until faced with overwhelming numbers.  No media source is going to write a strong piece that would upset their best advertisers.  Heck, if Nokia were paying substantial coin for a banner ad, I too would be inclined to become incurious.
In this case, the citizen has to ignore the media and take personal responsibility.  It will be another decade before the problem becomes rampant and properly publicized.
Ask yourself a question.  In the decades of your life, how many friends died of brain tumors in each decade?   Think about it carefully and share it with us here with a comment.

Read more: http://www.dailymail.co.uk/sciencetech/article-1287842/As-scientists-warn-regular-mobile-use-CAN-cause-cancer-just-safe-mobile-phone.html#ixzz0rPF7sDoZ
Posted by arclein at 1:52 AM

"Does it matter where you are phoning from? Yes, because the signal strength is determined by your location. The further you are from a phone mast, the more power the phone has to use to pick up a signal."

Receivers are passive. They don't increase power. Transmitters are active. Their power can be increased to improve receiver reception.

As far as I know, cell phones broadcast their "here I am" roaming signal at the same amplitude all the time, so cell tower systems know when to change the tower that communicates with the phone. Cell phones varying their signal strength would drive the cell tower system nuts.

Does a cell phone emit any radiation (or anything else) if deactivated? or if it needs recharging?

Cell phones will antidote homeopathic remedies and I'm trying to be sure one I had deactivated will no longer interfere.

Thanks for the info. And I am unplugging my cordless phone right this minute.

see my brain robber info about halcion at www.brainrobber.com

Maybe cell phones should be the next brain robber topic.

You are right about brain tumors and I point this out to people. In the past few years I have known several people who have either had brain tumors or known people with them. They seem much more common than they used to be. I understand that the brain tumor registries are several years behind in recording.

What is overlooked is...if the result of x amount of years = a brain tumour it must be doing something irritating/damaging to the cells to create this. Overlooked is the fact that signals cause activation to the central nervous system and peripheral nerves which are acknowledged as a transient effect but what if that is never switched off? If you irritate those nerves everyday, the biological system has to give..... and it does.