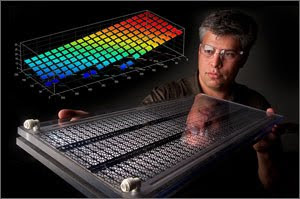 This is obviously a major improvement on present day air conditioning technology which has long been recognized as an energy hog that operated in an unsatisfactory manner.  No one was ever happy with it.
Properly improving the engineering of air conditioning is the single most effective thing that can today be done to lower household energy consumption. Other areas have long since been fixed.  Today we are all converting away from incandescent lighting. We have improved both heating and refrigeration.  Appliances are all generally much more energy efficient.
The air conditioner was the last bit of classical technology that really needed a smarter solution.  This is a long step down that road.
Energy Saving A/C Conquers All Climates
June 11, 2010
http://www.nrel.gov/features/20100611_ac.html
http://www.nrel.gov/features/images/20100611_ac1.jpg

NREL senior engineer Eric Kozubal examines a prototype air flow channel of the DEVap air conditioner, which he co-invented. DEVap, which stands for desiccant-enhanced evaporative air conditioner, is a novel concept that uses membrane technology to combine the efficiency of evaporative cooling and the drying potential of liquid desiccant salt solutions. The graph superimposed on the photo shows shows how hot humid air, in red, changes to cool dry air, in blue, as the air passes through the DEVap core.
Credit: Pat Corkery
Ah, the cool, refreshing feel of air conditioning on a sweltering summer day.
Ugh, the discomfort when those energy bills in July, August and September come due — $200, $400, $600 or more.
Feel miserable, or dig deep into your wallet — not much of a choice for the 250 million Americans who live in climates where heat, humidity or both are a Catch-22 for three to 12 months a year.
A soothing solution may be on its way, thanks to a melding of technologies in filters, coolers and drying agents.
The Department of Energy's National Renewable Energy Laboratory has invented a new air conditioning process with the potential of using 50 percent to 90 percent less energy than today's top-of-the-line units. It uses membranes, evaporative cooling and liquid desiccants in a way that has never been done before in the centuries-old science of removing heat from the air.
"The idea is to revolutionize cooling, while removing millions of metric tons of carbon from the air," NREL mechanical engineer Eric Kozubal, co-inventor of the Desiccant-Enhanced eVaporative air conditioner (DEVap), said.
"We'd been working with membranes, evaporative coolers and desiccants. We saw an opportunity to combine them into a single device for a product with unique capabilities."
Hot and Humid Climates are Tricky
http://www.nrel.gov/features/images/20100611_ac2.jpg 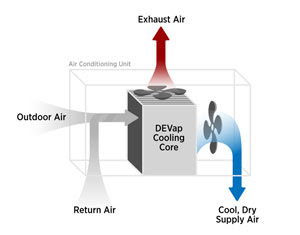 This illustration shows how the DEVap cooling core uses water and liquid desiccant to draw in outside air, exhaust some of that air and return cool, dry air to the area being cooled. DEVap's integrated evaporative component and its desiccant drying process offer improved dehumidification and, thus lower costs and much lower energy usage.
Evaporative coolers are a lower-cost alternative to A/C in dry climates that don't get too hot or humid — say, , but not or . Water flows over a mesh, and a fan blows air through the wet mesh to create humid, cool air.
In humid climes, adding water to the air creates a hot and sticky building environment. Furthermore, the air cannot absorb enough water to become cold.
In or , the evaporative cooler can bring down the temperature, but not enough to make it pleasant inside on a 100-degree day or during the four to eight week moist period known as monsoon season. The cooling bumps up against the wet bulb temperature, the lowest temperature to which air can be cooled by evaporating without changing the pressure. The wet bulb temperature could be 75 or 80 degrees on a mid-summer day. Typically, evaporative coolers only can bring the temperatures about 85 percent of the way to the wet bulb level.
So, for most of the country, refrigeration-based air conditioning is the preferred way of keeping cool.
Cooling Requires Temperature Drop and Less Moisture
Cooling comes in two forms — sensible cooling, which is a temperature drop, and latent cooling, which comes from pulling the moisture out of the air.
One intriguing product already on the market in arid, temperate climates is the Coolerado cooler. It differs from a typical evaporative cooler by never increasing the moisture content of the supply air. It provides cool air through indirect evaporative cooling. Indirect evaporative systems use a purge air stream that removes heat from the product or supply air stream that is then directed into a building.
That way, the Coolerado can cool the air all the way to the wet-bulb temperature.
"It's a big improvement on evaporative cooling because it doesn't add moisture and still gives you cold air," Kozubal said. However, in a humid climate, it still does not provide cold air or humidity control.
DEVap: Liquid Desiccants, Permeable Membranes
http://www.nrel.gov/features/images/20100611_ac3.jpg 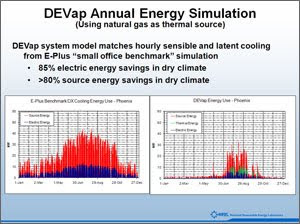 These graphs show the savings possible with DEVap in a warm, dry climate such as , if natural gas is the source of energy.
The DEVap solves that problem. It relies on the desiccants' capacity to create dry air using heat and evaporative coolers' capacity to take dry air and make cold air.
"By no means is the concept novel, the idea of combining the two," Kozubal said. "But no one has been able to come up with a practical and cost-effective way to do it."
HVAC engineers have known for decades the value of desiccants to air conditioning. In fact, one of the pioneers of early A/C, Willis Haviland Carrier, knew of its potential, but opted to go the refrigeration route.
Most people know of desiccants as the pebble-sized handfuls that come with new shoes to keep them dry.
The kind NREL uses are syrupy liquids — highly concentrated aqueous salt solutions of lithium chloride or calcium chloride. They have a high affinity for water vapor, and can thus create very dry air.
Because of the complexity of desiccant cooling systems, they have traditionally only been used in industrial drying processes. Inventing a device simple enough for easy installation and maintenance is what has impaired desiccant cooling from entering into commercial and residential cooling markets.
To solve that problem, the NREL device uses thin membranes that simplify the process of integrating air flow, desiccants, and evaporative cooling. These result in an air conditioning system that provides superior comfort and humidity control.
The membranes in the DEVap A/C are hydrophobic, which means water tends to bead up rather than soak through the membranes. Imagine rain falling on a freshly waxed car. That property allows the membranes to control the liquid flows within the cooling core. "It's that property that keeps the water and the desiccant separated from the air stream," Kozubal said.
"We bring the water and liquid desiccant into DEVap's heat-mass exchanger core," Kozubal said. "The desiccant and evaporative cooling effect work together to create cold-dry air."
The air is cooled and dried from a hot-humid condition to a cold and dry condition all in one step. This all happens in a fraction of a second as air flows through the DEVap air conditioner. The result is an air conditioner that controls both thermal and humidity loads.
DEVap helps the environment in many ways. DEVap uses 50 percent to 90 percent less energy than top-of-the-line refrigeration-based air conditioning.
Because DEVap uses salt solutions rather than refrigerants, there are no harmful chlorofluorocarbons (CFCs) or hydrochlorofluorocarbons (HCFCs) to worry about. A pound of CFC or HCFC in refrigerant-based A/Cs contributes as much to global warming as 2,000 pounds of carbon dioxide. A typical residential size A/C has as much as 13 pounds of these refrigerants. The release of this much refrigerant is equivalent to burning more than 1,300 gallons of gasoline, or driving over 60,000 miles in a 2010 Prius. That's based on the Environmental Protection Agency's fuel efficiency rating for the 2010 Prius and on the standard of 19.5 pounds of carbon dioxide for every gallon of gasoline burned.
Traditional air conditioners use a lot of electricity to run the refrigeration cycle, but DEVap replaces that refrigeration cycle with an absorption cycle that is thermally activated. It can be powered by natural gas or solar energy and uses very little electricity.
This means that DEVap could become the most energy efficient way to cool your house whether you live in , , or .
NREL has patented the DEVap concept, and Kozubal expects that over the next couple of years he will be working on making the device smaller and simpler and perfecting the heat transfer to make DEVap more cost effective.
Eventually, NREL will license the technology to industry, "We're never going to be in the air conditioner manufacturing business", said Ron Judkoff, Principle Program Manager for Building Energy Research at NREL. "But we'd like to work with manufacturers to bring DEVap to market and create a more efficient and environmentally benign air conditioning product."
Posted by arclein at 3:47 AM

DEVap, which stands for desiccant-enhanced evaporative air conditioner, is a novel concept that uses membrane technology to combine the efficiency of evaporative cooling and the drying potential of liquid desiccant salt solutions.So, for most of the country, refrigeration-based air conditioning is the preferred way of keeping cool.

I could say that this page is really great post for giving such a great info about
commercial air conditioning service wi.

Happy to see your blog as it is just what I’ve looking for and excited to read all the posts.I am looking forward to another great articles from you.HVAC Advertising Ideas and HVAC Newsletter

great article i always love to read about hvac thanks for sharing keep it up.If you are interested in hvac training i suggest that baystatatech is best Technical Schools Ma for training


This is so interesting blog. You are best listing knowledge provide at this site. I am very excited read this nice article. You can visit my website.
air conditioning