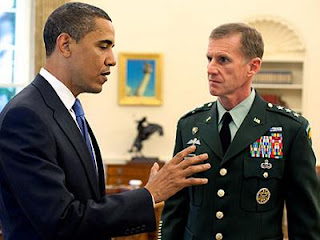 General McCrystal has effectively been released by Obama. The General made an error in getting a little too relaxed with an interviewer and openly expressed his frustration. The same could have been done through a time honored leak.

We now have it on good authority how inept the Obama administration actually is. It was becoming pretty obvious but the failure to make critical decisions in a timely manner is scary.

Recall that campaign commercial about who do you want to take the wake up call?

The bad news for Obama is that this general could resign his commission and then step up as a Republican presidential candidate immediately and start campaigning tomorrow. He would be in position to second guess every decision made by Obama and impact the national debate. Appointing Petraeous partially cures this for the short term but the stakes are now much higher.

And yes, now Petraeous has to win this one and he has Obama over a barrel to provide full support because it is now Obama’s war.