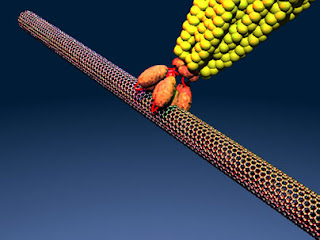 It is the measure of just how fast things are moving at the lab that this piece of science fiction is been demonstrated in principle.  It certainly will not be quick to make its way into every day technology, but they can actually do it.  One more tool has been added to the kit of homo scientificus.
A virus, or in this case a part of a virus, is small enough to work with on forming metallic structures.  Cells and the like are simply way too big for any of this.  This certainly is a proof of principle that should encourage plenty more effort.
The point is that the proteins are producing nano wires out of the metals.  That it should come this quickly in the development of nano materials is surprising and encouraging.  One can dare to dream impossible structures and then set about the task of fabrication using proteins as the manufacturing machines.
MIT Made a Virus Make a Battery
Written by Hank Green
Thursday, 02 April 2009
Those crazy lab rats at MIT are attempting to radically diminish the cost of producing sophisticated nanotech cathodes and anodes by enlisting viruses to do the hard work for them.
New lithium ion batteries are being designed with increasingly sophisticated cathodes and anodes that allow fast charge, controlled discharge, longer lifetimes and higher power densities. The problem is, as these components become more advanced, so too do the batteries. Which is why practical electric vehicles (now that they're feasible at all) seem to be generally out of my price range.
The team at MIT genetically engineered viruses to excrete certain proteins. Those proteins then react with chemicals introduced to the environment to create complicated structures. Proteins are very good at directing compounds to create complicated structures...like life forms.
The viruses, in effect, pull the needed compounds (gold and cobalt for the anode and iron phosphate and carbon for the cathode) into nanowires. Both the cathode and the anode for the battery were constructed by viruses, though the battery created is only big enough to power a calculator, the same technique could be used to make batteries for cars.
The best thing is, all you need is the viruses (which are easy enough to multiply exponentially in a lab) and the raw materials to create these sophisticated components. So the cost of advanced battery production could drop like a rock.
Unfortunately, the batteries being produced are not up to the standards of traditionally designed nanotech batteries. They can only go through about 100 cycles (vs. more than 1000 for today's batteries) before starting to lose their charge. Of course, the team is confident that they can direct the viruses more effectively and increase that number significantly.
This technique could also mean a more cost-effective way to build and test new battery chemistries. The team is already experimenting with slightly different cathodes and anodes to attempt to increase power density.
And so maybe soon viruses will be doing all our work for us.
Via GreenTechMedia
Posted by arclein at 4:12 AM