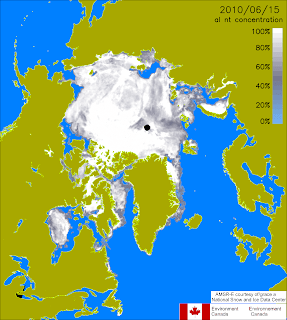 It is good to know that according to the USA Navy that the sea ice has been thickening the past two years.  My question is where?  The present activity is very much on a roll to hit a new record low.
Here again is my favorite ice check site, now been maintained out of the .  It presently looks like a runaway freight train.
http://www.socc.ca/cms/en/socc/seaIce/currentSeaIce.aspx
Right now the Navy report makes little sense unless they chose completely different routes or the wind shifted a lot of ice or ?
We are half way through June and major portions of the ice flow in the eastern arctic are getting ready to disappear.  This is at least a month soon.
The core region appears intact, but I am now expecting to see failure zones throughout the core before this is over this year.
The first image is the present sea ice distribution.
The second image is the comparison to the ten year average.  Recall that we have been in decline for at least fifteen years.  Most of the time it was not visible at all. 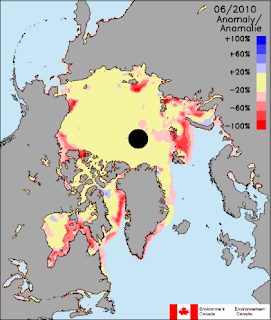