Hay on Oil on Water 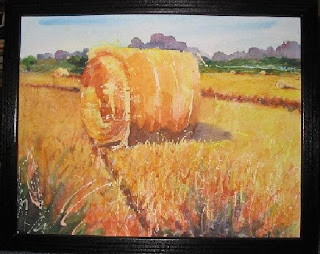 There is an interesting idea out there that could assist in the oil spill cleanup.  We are entering the haying season and it turns out that hay is a great fiber product that simply grabs oil in the water and separates it from the water converting the hay into an oil saturated mat that can be recovered.  Oil wants to glom onto something and hay is certainly a great start.  At least the idea itself is valid and nothing else is actually available today.
The haying season has just started and plenty could be diverted to this task.  Laying the hay in the oily surf would be a great start.  In fact one could keep adding to the developing oil saturated berm every day as the oil comes ashore.  Any oil trapped by the hay is not going to end up in the sands.
In fact, in the wetlands, laying down a mat of hay and then covering it with a layer of sand and mud sounds like a great idea.  Then one could lay additional mats in front of this temporary berm. Again the oil will be trapped by the hay.
Once the risk of additional landings has ceased, it will not be difficult for gather the oil soaked hay to either burn in place or even process somehow.
The key point is that the necessary resource is available today and farmers with equipment are also available.  No one else is at all.  The only other possible option is to build berms which do not trap the oil but prevent further penetration only.  The other things out there are nonsense.
Because it is an emergency, we do not have any options.  The easiest way now is to lay out the hay mats by unrolling bales right in the low tide zone just as the oil begins to land.  That allows the oil to mix as it comes ashore.  Not perfect but a team can likely support a quarter mile of water front in this manner.
Key is to let the ocean work the mats and to keep adding hay as the oil accumulates.  It should accumulate on the tidal part of the beach.  This is flexible enough for crews to respond to local concentrations with each incoming tide and they would soon get clever about it all.
Posted by arclein at 3:32 AM

We are available to assist but no response thus far