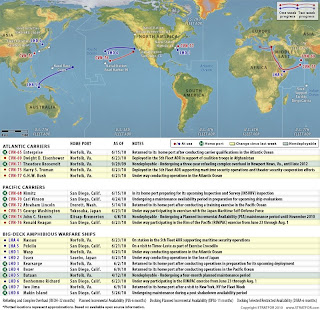 Pretty well all the necessary resources are now in position to support an air assault on ’s nuclear industry.  Israeli assets have access to Saudi air bases which should only happen close to the day of attack.  Otherwise the heat from the Islamic fanatics would grow and become unpredictable.
Coincidentally we have a task force transiting the .  At this point, any sane person heads for his bunker.  Now we find that Israeli air force assets are on the northern border of .  Everything is in position right now.
Israeli will handle the entire attack but it is obvious that the US Navy is providing full support.  The attitude is surely that has been provided ample opportunity to behave and are over due for an attitude adjustment and a major reduction of nuclear capability.
It serves US and Saudi interests to have this treat reduced.  In fact it serves the entire Sunni world.  So we get the ultimate irony of a Sunni Israeli Alliance to eliminate a Shiite threat.
I do not believe that this deployment is bluster because it cannot be easily sustained for months.  Besides, the final decision will not be Obama’s.  In fact it may even coincide with the July 4th weekend.
Also note that has called of its blockade running operation when declared it to be an act of war.  This meant that it would be summarily sunk.
I suspect that whatever passes for the Iranian air force today stands to be destroyed if it comes up to play.  More likely, it will stand down for simple lack of effective hardware.  Unless something has changed, the birds are all thirty years out of date and short of parts.  That embargo has bite on that area in particular.
I am assuming that selective airstrikes will do the job.  However, the Increased US presence may also presage a Stealth bomber campaigne.
USS Carrier Harry Truman Now Officially Just Off , As Allegedly Plotting An Imminent Raid
Submitted by Tyler Durden on 06/27/2010 12:50 -0500
As we first reported last week, in an article that was met with much original skepticism, the Pentagon has now confirmed that a fleet of 12 warships has passed the Suez Canal, and is now likely awaiting orders to support the escalation in the Persian Gulf. The attached image fromStratfor shows the latest positioning of US aircraft carrier groups as of June 23: the USS Harry Truman (CVN-75) is now right next to USS Eisenhower (CVN 69), both of which are waiting patiently just off Iran.
As for the catalyst the two carriers may be anticipating, we provide the following update from theGulf Daily News where we read that may be on the verge of an attack of , with an incursion originating from military bases in and .
We caution readers to take this news with a grain of salt as the Gulf Daily News' sister publication,Akhbar Al Khaleej, has a slightly less than stellar credibility rating. Then again, this is what some, Breaking News Online most notably, said about last week's carrier news, urging readers to ignore it.
'PLOTS RAID'
Posted on » Saturday, June 26, 2010
http://www.gulf-daily-news.com/NewsDetails.aspx?srch=1&storyid=281041
: is massing warplanes in the Caucasus for an attack on , it was revealed yesterday.
Preparations are underway to launch the military attack from and , reports our sister paper Akhbar Al Khaleej, quoting military sources.
Israel was, in fact, training pilots in Turkey to launch the strike and was smuggling planes into Georgia using Turkish airspace, they said.
However, was unaware of 's intention of transferring the planes to , the sources said.
The unexpected crisis between and following an Israeli commando raid on an aid flotilla bound for Strip hit Israeli calculations.
Azerbaijan-based intelligence units, working under the cover of technicians, trainers and consultants, have helped with the preparations, the sources said.
Military equipment, mostly supplied by the , was transported to a Georgian port via the .
Georgian coastguard and Israeli controllers are co-operating to hide the operations from Russian vessels, said the sources.
They point out that according to , it will not be in a position to launch a strike on without using bases in and due to the limited capabilities of its nuclear submarines stationed near the Iranian coast.
Meanwhile, 's Press TV reported that a very large contingent of ground forces had massed in , near the Iranian border. The independent Azerbaijani news website Trend confirmed the report.
Those reports came just days after the Pentagon confirmed that an unusually large fleet of US warships had indeed passed through 's en route to the Gulf. At least one Israeli warship reportedly joined the American armada.
Press TV also quoted Iranian Revolultionary Guard Brigadier General Mehdi Moini as saying that the country's forces are mobilised and ready to face Israelli and American "misadventures" near its borders.
* Iran last night said it has cancelled plans to send an aid ship to the Gaza Strip as Israel "had sent a letter to the UN saying that the presence of Iranian and Lebanese ships in the Gaza area will be considered a declaration of war on that regime and it will confront it," Irna said.
Posted by arclein at 4:17 AM