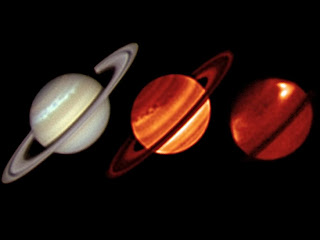 Gas giants continue to be great places to observe at a safe distance.

This is the first time since 1990 that we have had such a huge storm erupting on Saturn and this gives us an opportunity to collect a lot of new data.

May 19, 2011:  NASA's Cassini spacecraft and a European Southern Observatory ground-based telescope are tracking the growth of a giant early-spring storm in Saturn's northern hemisphere so powerful that it stretches around the entire planet. The rare storm has been wreaking havoc for months and shooting plumes of gas high into the planet's atmosphere. 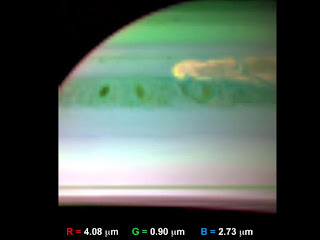 "Nothing on Earth comes close to this powerful storm," says Leigh Fletcher, a Cassini team scientist at the University of Oxford in the United Kingdom, and lead author of a study that appeared in this week's edition of Science Magazine. "A storm like this is rare. This is only the sixth one to be recorded since 1876, and the last was way back in 1990."

Cassini's radio and plasma wave science instrument first detected the large disturbance in December 2010, and amateur astronomers have been watching it ever since through backyard telescopes.  As it rapidly expanded, the storm's core developed into a giant, powerful thunderstorm, producing a 3,000-mile-wide (5,000-kilometer-wide) dark vortex possibly similar to Jupiter's Great Red Spot.

This is the first major storm on Saturn observed by an orbiting spacecraft and studied at thermal infrared wavelengths.  Infrared observations are key because heat tells researchers a great deal about conditions inside the storm, including temperatures, winds, and atmospheric composition. Temperature data were provided by the Very Large Telescope (VLT) on Cerro Paranal in Chile and Cassini's composite infrared spectrometer (CIRS), operated by NASA's Goddard Space Flight Center in Greenbelt, Md.

"Our new observations show that the storm had a major effect on the atmosphere, transporting energy and material over great distances -- creating meandering jet streams and forming giant vortices -- and disrupting Saturn's seasonal [weather patterns]," said Glenn Orton, a paper co-author, based at NASA's Jet Propulsion Laboratory in Pasadena, Calif.

The violence of the storm -- the strongest disturbances ever detected in Saturn's stratosphere -- took researchers by surprise. What started as an ordinary disturbance deep in Saturn's atmosphere punched through the planet's serene cloud cover to roil the high layer known as the stratosphere.

Thermal infrared images of Saturn from the Very Large Telescope Imager and Spectrometer for the mid-Infrared (VISIR) instrument on the European Southern Observatory's Very Large Telescope, on Cerro , appear at center and on the right. An amateur visible-light image from Trevor Barry, of , appears on the left. The images were obtained on Jan. 19, 2011.

"On Earth, the lower stratosphere is where commercial airplanes generally fly to avoid storms which can cause turbulence," says Brigette Hesman, a scientist at the of in who works on the CIRS team at Goddard and is the second author on the paper. "If you were flying in an airplane on Saturn, this storm would reach so high up, it would probably be impossible to avoid it."

A separate analysis using Cassini's visual and infrared mapping spectrometer, led by Kevin Baines of JPL, confirmed the storm is very violent, dredging up deep material in volumes several times larger than previous storms. Other Cassini scientists are studying the evolving storm and, they say, a more extensive picture will emerge soon.

Stay tuned to Science@NASA for updates.