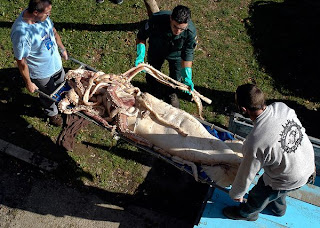 It is hard to believe that not so long ago, such remains were so rare that biologists refused to believe in the existence of such creatures except for the secondary evidence caused by scaring on their chief predator, the sperm whale.  That is obviously no longer much of a problem.

We are reaching the point in which we will have ubiquitous deep sea vessels able to provide a wind shield like view and associated lighting.  A sonic gun can be also useful in killing specimens and allowing their recovery.  The real problem is bringing such specimens to surface without the tissue exploding.

I am expecting a fairly dramatic era of deep sea discovery once that happens as a whole new world of species from the deep is discovered.  I expect to see the famous sea serpent down there. In particular.

Workers recover the remains of a female giant squid in 's province in 2003.

for National Geographic News
Published May 3, 2011

When giant squid were found dead off Spain about a decade ago, scientists suspected that powerful sound pulses from ships had harmed the animals. Now the evidence may be in.

A new study says low-frequency sounds from human activities can affect squid and other cephalopods, not just whales and other marine mammals, which have long been thought to be vulnerable to such pulses. (See "U.S. Navy Sonar May Harm Killer Whales, Expert Says.")

The finding suggests noise pollution in the ocean is having a much broader effect on marine life than previously thought, said study leader Michel André, a marine bioacoustician at Barcelona's Technical University of Catalonia.

"We know that noise pollution in the oceans has a significant impact on dolphins and whales [which use natural sonar to navigate and hunt]. ... but this is the first study indicating a severe impact on invertebrates, an extended group of marine species that are not known to rely on sound for living," André said in a statement.
Giant Squid Mystery Solved?

In the early 2000s the remains of giant squid were found off 's Asturias province (map). In each case, the creatures' bodies appeared soon after ships had used air guns to conduct low-frequency sound-pulse exercises in the region, in some cases for oil-and-gas prospecting efforts.

Scientists investigating the giant squid remains at the time found evidence of extensive bodily damage, including mantles reduced to pulp, bruised muscles, and lesions in statocysts. These fluid-filled organs rest behind the creatures' eyes and help giant squid maintain balance and position. (See pictures of a colossal squid dissection.)

At the time, marine biologist Angel Guerra speculated—but was unable to prove—that noise from prospecting ships was harming cephalopods and other marine life.

"With this study, we now have proof" that low-frequency sounds can harm cephalopods, said Guerra, a marine biologist at Spain's Marine Research Institute who was not involved in the current study, which will appear in a future issue of the journal Frontiers in Ecology and the Environment.

During the study, the research team examined the effects of low-frequency sound exposure in 87 individual cephalopods belonging to four species: two species of squid, one species of octopus, and one species of cuttlefish. (See"Cuttlefish Change Color, Shape-Shift to Elude Predators.")

For two hours the animals were exposed to sound with intensities of between 157 and 175 decibels and frequency ranges of 50 to 400 Hertz.

These frequencies and intensities "are commonly found in the noise produced by many activities at sea," such as military sonar tests or efforts to detect oil and natural gas by gauging the nature of material beneath the seabed, the Technical University of Catalonia's André told National Geographic News.

After the sound exposure, the scientists killed the animals, either immediately or up to 96 hours afterward.

The animals that were killed immediately after exposure showed signs of damage to their statocyst tissue. Specifically, tiny hairlike structures in statocyst cells—which bend as the cephalopods move through water and help the animals balance—were lost, essentially crippling the creatures.

"This is a typical process found in land mammals and birds after acute noise exposure: a massive acoustic trauma followed by peripheral damage, making the lesions worse over time," André said.

In their final seconds or hours, the test cephalopods "moved a little bit, but they were not swimming, eating, or mating," André said.

A separate group of about a hundred cephalopods was not exposed to the pulses. They remained healthy and behaved normally.

Both groups had been kept in the same aquariums before being separated, and all the animals had behaved normally before the tests—ruling out the possibility that the damage observed in the test group was due to captivity or human handling, he said.
("Raise the Alarm" for Giant Squid?

The test animals are appropriate stand-ins for their giant squid cousins, according to Guerra, who said he sees no reason why the findings wouldn't apply to giant squid.

There are some differences in the damage, though.

The injuries to the giant squid found last decade, he noted, were much more pronounced than in the experimental animals. Guerra attributes this to the higher acoustic intensities and multiple sound sources giant squid are exposed to in the real world.

And of course, the giant squid were found not just injured but dead, unlike the test animals. But scientists say the case of the giant squid off suggests death is one possible outcome of exposure to low-frequency blasts.

At the time of the giant squid deaths, "we hypothesized that the giant squid died in one of two ways: either by direct impact from the sound waves or by having their statocysts practically destroyed and [the squid] becoming disoriented," Guerra explained.

"The disoriented animals might wander up from the depths to the surface, where the temperature difference kills them."

Marine zoologist Michael Vecchione, of the National Oceanic and Atmospheric Administration (NOAA), isn't yet sure.

Though the new research presents enough evidence to "raise the alarm," more studies are necessary before a solid case can be made that human-caused noise pollution is causing pervasive damage to marine life, said Vecchione, who also did not participate in the study.

But, he added, "the evidence is accumulating that what [Guerra] first proposed based on the giant squid might actually be correct."