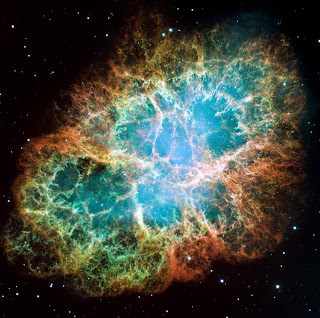 It is always amusing to watch new evidence mess up old assumptions.  There is a lot out there and we get more data with every passing day.  The problem is that we can not ever test our theories properly to confirm out ideas.

The only thing we know for sure is that if we could, we would be astounded by how much we never imagined.  Thus I find assured commentary to be disconcerting.

I suspect that there are now patterns out there to be winkled out and explained quite differently from present paradigms.

Most of us with an interest in astronomy would recognize the Crab Nebula in images and videos quite readily. The supernova remnant, first seen on Earth in the year 1054, consists of a super-dense neutron star that spins about 30 times an second, making it a pulsar that swings a beam of radiation towards Earth, like a lighthouse.

NASA’s Fermi Gamma-ray Space Telescope is one of many that look for high-energy radiation sources, and recently the Crab Nebula has caught its eye. The past seven months have seen some rather dramatic variations within the nebula, with Fermi and other telescopes noticing X-ray flares a hundred times brighter than seen ever before.

Since 2009 Fermi has detected several short-lived gamma-ray flares at energies greater than 100 million electron volts (eV), which is much higher than the flares seen before. On 12 April Fermi detected a flare that grew about 30 times more energetic than the nebula’s normal gamma-ray output and about five times more powerful than previous outbursts. On 16 April an even brighter flare erupted, which lasted for a few days before the activity died out.

“These superflares are the most intense outbursts we’ve seen to date and they are all extremely puzzling events,” says Alice Harding of NASA’s .

“We think they are caused by sudden rearrangements of the magnetic field not far from the neutron star, but exactly where that’s happening remains a mystery.”

When Fermi noted the variances in 2010 it alerted NASA’s Chandra X-ray Observatory, which began routinely monitoring the nebula to identify X-ray emissions associated with the outbursts. When Fermi scientists alerted the astronomers at Chandra about the spike in April, a pre-planned set of observations using the observatory was initiated.

Unfortunately, no clear evidence was seen for correlated flares in the Chandra images, so the reason for the sudden extreme variations is still a mystery. Theorists have deduced that the flares must arise within about one-third of a light-year from the neutron star, but efforts to locate them more precisely have been unsuccessful.

Scientists believe the flares occur as the intense magnetic field near the pulsar undergoes sudden structural changes. Such changes can accelerate electrons to velocities near the speed of light. As these relativistic electrons interact with the magnetic field, they emit gamma rays. To account for the observed emission, scientists say the electrons must have energies 100 times greater than can be achieved in any particle accelerator on Earth. This makes them the highest energy electrons associated with any source within our galaxy.

Take a look at the wonderful video by NASA that shows the changes as seen by Chandra, as well as some spectacular shots of the nebula.