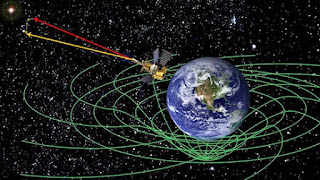 This describes a nifty test of one of the predictions of the theory of general relativity.  What is neat is that it worked and did show the expected vortex generated by earth.  It appears that the tools invented were even niftier.

General relativity is one of the greatest intellectual achievements of physics.  It stalled only because it could not readily work with small measures.  Recall that the black hole is nicely predicted by the theory except that it can say nothing at the event horizon.  The recent consensus acceptance of the idea itself is a bad mistake and reflects this lack of understanding.

Quantum tries to work backward into structure from macro observations and throws a Ptolemaic blanket over it all.

May 4, 2011: Einstein was right again. There is a space-time vortex around Earth, and its shape precisely matches the predictions of Einstein's theory of gravity.

Researchers confirmed these points at a press conference today at NASA headquarters where they announced the long-awaited results of Gravity Probe B (GP-B).

"The space-time around Earth appears to be distorted just as general relativity predicts," says physicist Francis Everitt, principal investigator of the Gravity Probe B mission.

An artist's concept of GP-B measuring the curved spacetime around Earth.

"This is an epic result," adds Clifford Will of in . An expert in Einstein's theories, Will chairs an independent panel of the National Research Council set up by NASA in 1998 to monitor and review the results of Gravity Probe B. "One day," he predicts, "this will be written up in textbooks as one of the classic experiments in the history of physics."

Time and space, according to Einstein's theories of relativity, are woven together, forming a four-dimensional fabric called "space-time." The mass of Earth dimples this fabric, much like a heavy person sitting in the middle of a trampoline. Gravity, says Einstein, is simply the motion of objects following the curvaceous lines of the dimple.

If Earth were stationary, that would be the end of the story. But Earth is not stationary. Our planet spins, and the spin should twist the dimple, slightly, pulling it around into a 4-dimensional swirl. This is what GP-B went to space in 2004 to check.

The idea behind the experiment is simple:

Put a spinning gyroscope into orbit around the Earth, with the spin axis pointed toward some distant star as a fixed reference point. Free from external forces, the gyroscope's axis should continue pointing at the star--forever. But if space is twisted, the direction of the gyroscope's axis should drift over time. By noting this change in direction relative to the star, the twists of space-time could be measured.

In practice, the experiment is tremendously difficult. 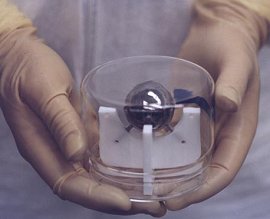 One of the super-spherical gyroscopes of Gravity Probe B.

The four gyroscopes in GP-B are the most perfect spheres ever made by humans. These ping pong-sized balls of fused quartz and silicon are 1.5 inches across and never vary from a perfect sphere by more than 40 atomic layers. If the gyroscopes weren't so spherical, their spin axes would wobble even without the effects of relativity.

According to calculations, the twisted space-time around Earth should cause the axes of the gyros to drift merely 0.041 arcseconds over a year. An arcsecond is 1/3600th of a degree. To measure this angle reasonably well, GP-B needed a fantastic precision of 0.0005 arcseconds. It's like measuring the thickness of a sheet of paper held edge-on 100 miles away.

"GP-B researchers had to invent whole new technologies to make this possible," notes Will.

They developed a "drag free" satellite that could brush against the outer layers of Earth's atmosphere without disturbing the gyros. They figured out how to keep Earth's magnetic field from penetrating the spacecraft. And they created a device to measure the spin of a gyro--without touching the gyro. More information about these technologies may be found in the Science@NASA story "A Pocket of Near-Perfection."

Pulling off the experiment was an exceptional challenge. But after a year of data-taking and nearly five years of analysis, the GP-B scientists appear to have done it.

"In the opinion of the committee that I chair, this effort was truly heroic. We were just blown away," says Will. 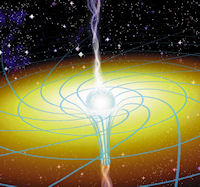 The results of Gravity Probe B give physicists renewed confidence that the strange predictions of Einstein's theory are indeed correct, and that these predictions may be applied elsewhere. The type of spacetime vortex that exists around Earth is duplicated and magnified elsewhere in the cosmos--around massive neutron stars, black holes, and active galactic nuclei.

"If you tried to spin a gyroscope in the severely twisted space-time around a black hole," says Will, "it wouldn't just gently precess by a fraction of a degree. It would wobble crazily and possibly even flip over."

In binary black hole systems--that is, where one black hole orbits another black hole--the black holes themselves are spinning and thus behave like gyroscopes. Imagine a system of orbiting, spinning, wobbling, flipping black holes! That's the sort of thing general relativity predicts and which GP-B tells us can really be true.

The scientific legacy of GP-B isn't limited to general relativity. The project also touched the lives of hundreds of young scientists:

"Because it was based at a university many students were able to work on the project," says Everitt. "More than 86 PhD theses at Stanford plus 14 more at other Universities were granted to students working on GP-B. Several hundred undergraduates and 55 high-school students also participated, including astronaut Sally Ride and eventual Nobel Laureate Eric Cornell."

NASA funding for Gravity Probe B began in the fall of 1963. That means Everitt and some colleagues have been planning, promoting, building, operating, and analyzing data from the experiment for more than 47 years—truly, an epic effort.

Everitt recalls some advice given to him by his thesis advisor and Nobel Laureate Patrick M.S. Blackett: "If you can't think of what physics to do next, invent some new technology, and it will lead to new physics."

"Well," says Everitt, "we invented 13 new technologies for Gravity Probe B. Who knows where they will take us?"

This epic might just be getting started, after all….