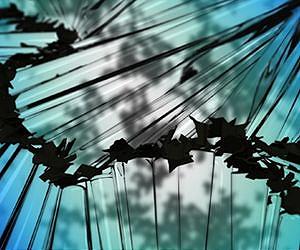 This is quite clever work and will be quickly adapted to a variety of materials for a variety of applications.  Right now we are just beginning to grasp the scope of this methods potential, but it is sufficient to say we have another type of switch here which is not obviously over precise and can be readily applied to circumstances not needing such precision.

I suspect that this technology will soon become commonly applied as we get some experience with it.  Imagine just how much one could use this to affect the performance of steel.

It will mostly be applied to exotic materials in the early days and perhaps in something as prosaic as the fuse box were a simple metal fork would be rather welcome.  In fact having a conductor that can be inserted anywhere and counted on to cut of current on overheating would be hugely efficient and put the whole difficulty out of mind.  Systems could then be engineered to accept only a certain load before merely choking of supply.

Today the fuse component is a major part of the overall circuit design in terms of hardware.  Replacing it all with simple cable inserts that did the same thing is a much better option.

An artistic rendering of the suspension as it freezes shows graphite flakes clumping together to form a connected network (dark spiky shapes at center), as they are pushed into place by the crystals that form as the liquid hexadecane surrounding them begins to freeze. Image: Jonathan Tong

"It's a new way of changing and controlling the properties" of materials - in this case a class called percolated composite materials - by controlling their temperature, says Gang Chen, MIT's Carl Richard Soderberg Professor of Power Engineering and director of the Pappalardo Micro and Nano Engineering Laboratories. Chen is the senior author of a paper describing the process that was published online on April 19 and will appear in a forthcoming issue of Nature Communications.

The paper's lead authors are former MIT visiting scholars Ruiting Zheng of and Jinwei Gao of , along with current MIT graduate student Jianjian Wang. The research was partly supported by grants from the National Science Foundation.

The system Chen and his colleagues developed could be applied to many different materials for either thermal or electrical applications. The finding is so novel, Chen says, that the researchers hope some of their peers will respond with an immediate, "I have a use for that!"

One potential use of the new system, Chen explains, is for a fuse to protect electronic circuitry. In that application, the material would conduct electricity with little resistance under normal, room-temperature conditions. But if the circuit begins to heat up, that heat would increase the material's resistance, until at some threshold temperature it essentially blocks the flow, acting like a blown fuse.

But then, instead of needing to be reset, as the circuit cools down the resistance decreases and the circuit automatically resumes its function.

Another possible application is for storing heat, such as from a solar thermal collector system, later using it to heat water or homes or to generate electricity. The system's much-improved thermal conductivity in the solid state helps it transfer heat.

Essentially, what the researchers did was suspend tiny flakes of one material in a liquid that, like water, forms crystals as it solidifies. For their initial experiments, they used flakes of graphite suspended in liquid hexadecane, but they showed the generality of their process by demonstrating the control of conductivity in other combinations of materials as well.

The liquid used in this research has a melting point close to room temperature - advantageous for operations near ambient conditions - but the principle should be applicable for high-temperature use as well.

The process works because when the liquid freezes, the pressure of its forming crystal structure pushes the floating particles into closer contact, increasing their electrical and thermal conductance. When it melts, that pressure is relieved and the conductivity goes down.

In their experiments, the researchers used a suspension that contained just 0.2 percent graphite flakes by volume. Such suspensions are remarkably stable: Particles remain suspended indefinitely in the liquid, as was shown by examining a container of the mixture three months after mixing.

By selecting different fluids and different materials suspended within that liquid, the critical temperature at which the change takes place can be adjusted at will, Chen says.
"Using phase change to control the conductivity of nanocomposites is a very clever idea," says Li Shi, a professor of mechanical engineering at the of at . Shi adds that as far as he knows "this is the first report of this novel approach" to producing such a reversible system.

"I think this is a very crucial result," says Joseph Heremans, professor of physics and of mechanical and aerospace engineering at . "Heat switches exist," but involve separate parts made of different materials, whereas "here we have a system with no microscopic moving parts," he says. "This is excellent work."
Posted by arclein at 12:01 AM