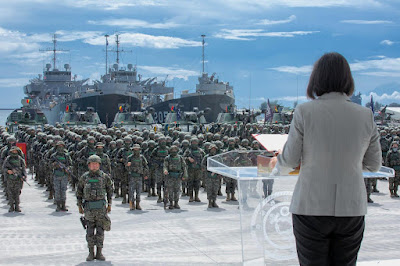 It is not actually impossible, but without major improvements in PLA capability, it is not a CCP option.
Recall that they have built out possibly 15,000 fishing boats operating globally on the high seas.  These ships can easily pack 100 soldiers along with a lot of equipment.  That boils down to landing 1,500,000 troops all along the West Coast of Taiwan in one invasion assault.
Landing means coming in just after low tide to hit tidal mud and to be grounded.  The men and equipment would be quickly offloaded and poured ashore.  Then as the tide rises, the ships are refloated and they return to the mainland actually now able to repeat the next day.  After that larger ships and barges can start bringing in heavy equipment.
My point is that those high seas fishing boats represent a huge treat to Taiwan and would be a devil to neutralize after the invasion has started.
However, building a barrier reef at low tide is completely possible using a pad of wire grid with chicken wire to fill spacing and a layer of rip rap on top allowing equipment to move along the reef.  This can then be charged up to allow consolidation over time as well.  Thr barrier can then be continously thickened as needed to prevent an assault.  A truck load of rock every twenty feet or so would prevent sea borne penetration.
I would do this to every available beach and while at it introduce aqua culture behind the new reef.  That puts plenty of eyeballs on the beaches as well.
» Successfully Invading Taiwan is Militarily Impossible
December 16, 2021 by Brian Wang
Discourse Magazine has a summary of some of problems which make a military invasion of Taiwan impossible. I personally lived in Taiwan in 1995 and rode a bus through mountains and hills outside of the capital of Taipei. There were truck-sized tunnels leading off from the main tunnels. I believe over the decades Taiwan’s military has dug in all over the island. They were expecting an invasion for decades. What would D-day have been like if the Germans had prepared for decades instead of a couple of years?
China has less amphibious landing craft than the US and allies did for D-day. China would have to cross 120 miles of ocean in the modern age where satellites, drones and planes would see all troop movements. Taiwan has large artillery and missiles that would be sinking everything trying to come over the water.
China has never had a naval military operation of any kind in the last two centuries. China had major military action during the Korea war in the early 1950s and a significant border war with Vietnam in the 1980s. It was all land army fighting and minimal air fighting. China did poorly in the forty year old fight with Vietnam. China now has a lot of spoiled only child soldiers.
China has a bunch of modern military gear now but they have not actually used it. Taiwan has more modern aircraft and military equipment than Iraq under Hussein. The US military was able to smash the Iraq military by attacking over land, sea and air. The US has been using its military all the time for the last 80 years. China would have to capture its beachhead by using an operation larger than D-Day.
There were 50,000 Germans defending the beaches on D-Day and they were attacked by 146,000 Allied troops.
Taiwan’s military is made up of 290,000 personnel: 130,000 in the Army; 45,000 in the Navy and Marine Corps; and 80,000 in the Air Force. Taiwan has nearly 4 million in the military reserve. Most men had to serve briefly in the military as part of a “mandatory” draft.
China could also try to fly more troops in via helicopter.
74 page Taiwan Defense Review for 2021.
Taiwan is two-thirds mountains. It is very easy to defend the beaches with artillery and missiles. This would make attacking Taiwan over ten times worse than trying to take the beaches of Normandy. 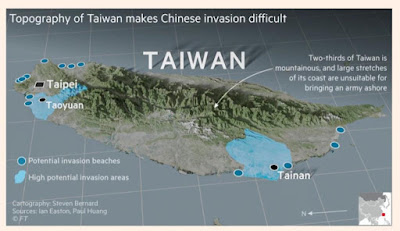 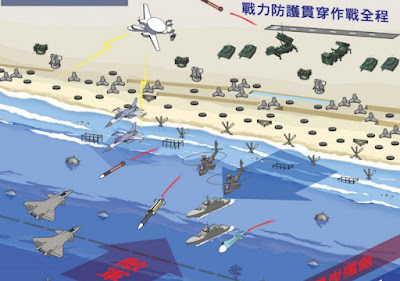 China military could try to pound Taiwan with planes and missiles. However, Taiwan is critical to the world economy as the source of 92% of advanced chips with features smaller than 10 nanometers. $4+ trillion in IT and tech industries and the advanced world economies would get massively disrupted if Taiwan Semiconductor operations were interfered with. Apple, Nvidia, AMD, Qualcomm all depend on TSMC chips. This would make it impossible for any US administration to just let China try and take Taiwan.
TSMC could fly out key personnel on a couple of passenger planes would prevent China from capturing any brain trust. Messing up fab operations and supply chains could not be tolerated.
China President’s Xi would have to figure out a way for Taiwan to give up without a fight or virtually no fight. Taiwan would have to fold at the first sign of a real move. The inhabitants who are descendent of people who arrive prior to the mid-20th century and many who arrived with the Nationalists are not interested in mainland rule.
Recent polls indicate 68% of the people would fight for Taiwan.
50.1 percent of the public support maintaining the “status quo,” 38.9 percent back independence and 4.7 percent favor joining China. 70.3 percent have a negative view of China.
SOURCES- Taipei Times, Taiwan Ministry of National Defense
Written by Brian Wang, Nextbigfuture.com
Posted by arclein at 12:00 AM