When the body Dies 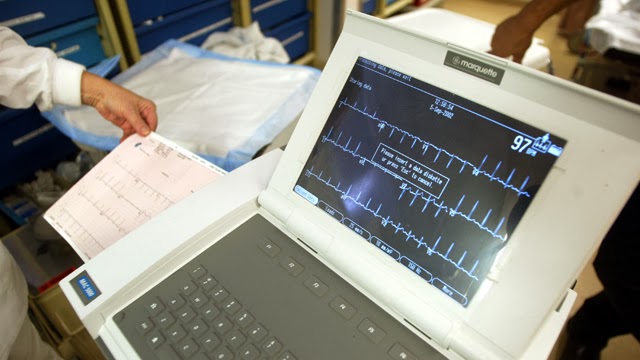 There are obviously several factors involved and we have been badly misinformed until recently.  That is fortunately changing.  The take home remains exactly the same.  Apply CPR in the form of heart compressions to maintain active blood while help arrives.  It does work and prospects are far better than has been assumed.

What has been broken is the assumption of a low threshold death that has informed emergency room personnel for years.

This is all good and perhaps we can claw back the awful death rate associated with heart attacks.

Scientists are stretching the boundaries of understanding what happens as the body dies - and learning more about ways to perhaps interrupt the process, which takes longer than we might suppose.

Death is the final outcome for 100 percent of patients. But there's growing evidence that revival is possible for at least some patients whose hearts and lungs have stopped working for many minutes, even hours. And brain death - when the brain irreversibly ceases function -- is also proving less open and shut.

For decades, doctors have recorded cases where people immersed in very cold water have been revived after hours have gone by. Normally, brain cells start dying within a few minutes after the heart stops pumping oxygen.

Many studies have found that hypothermia protects the brain by decreasing its need for oxygen and staving off cell death. Body cooling has become common for many patients after cardiac arrest.

However, cooling more a few degrees below normal temperature can also cause cell damage.
Cardiologists are still tinkering to find the best approach. Two recent studies presented at the American Heart Association's scientific meeting in Dallas in November tried to see whether early cooling by paramedics after they get a heart restarted is helpful (it didn't seem affect survival or brain damage) or whether cooling to 91.4 degrees Fahrenheit or 96.8 degrees during the first day in the hospital brings better results (again, not much difference).

Then there's the issue of how long to perform CPR. One 2012 study found the median duration in hospitals was 20 minutes for patients that didn't survive; 12 minutes for those who did. The AHA recommends bystanders keep performing CPR until emergency medical services arrive.

A Japanese study presented at the AHA meeting, based on six years of data on cardiac arrest survival across Japan, concluded it is worthwhile to continue CPR for 38 minutes or longer and still have a chance to avoid major brain damage.

Defining brain death is becoming more complex as researchers find signs of activity in both human and animal subjects whose brain waves at first show they've "flat-lined" to the point that there is no brain function. While some doctors use the EEG as a final check for signs of life in the brain, most rely on a series of reflex and respiration tests given over several hours to determine brain death.

Scientists at the University of Montreal reported in September on the case of one Romanian patient who was in an extreme deep coma after treatment with a powerful anti-epileptic drug. Although the electroencephalogram (EEG) showed no activity in the man's cortex (the master processor of the brain), there was activity in the hippocampus, the region responsible for memory and learning.

The Montreal team, which reported their findings in the journal PLOS One, recreated the same coma state in 26 cats, and observed the same type of oscillations being generated in the hippocampus of each one.

Although the clinical determination of brain death in a hospital relies on more than a flat EEG, the Montreal study is one of many that suggest the criteria may need to be changed. And it points to the possibility that greater use of medically-induced deep coma to help brain-injured people recover may be possible.

Just how conscious the brain remains after cardiac arrest is frequently debated and researched. Various studies of cardiac arrest survivors shows many experience profound mental or emotional change. About 20 percent of survivors say they heard or saw something while they were clinically dead.

During the AHA meeting, Dr. Sam Parnia, head of intensive care at Stony Brook University Hospital in New York, reported early results of a 25-hospital study of how frequently cardiac arrest survivors see or hear things while their hearts are stopped. Of 152 survivors interviewed, 37 percent said they had recollections from the unconscious period. Only two recalled actually seeing events and one described any events that could be verified. None saw images mounted in the treatment room as part of the experiment.

Still, there's evidence that dying brains can remain active. In August, researchers at the University of Michigan reported on brain studies of rats dying from induced cardiac arrest and suffocation. They found that within the first 30 seconds after death, all the rats displayed a surge of brain activity. The rodents' brains showed consciousness that exceeded levels normally found in the animals when they're awake.

Copyright 2013 Scripps Media, Inc. All rights reserved. This material may not be published, broadcast, rewritten, or redistributed.