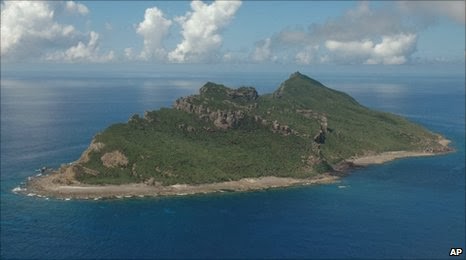 I am familiar with this deep Chinese belief system regarding the unfinished business of the Sino Japanese war.  That war ended because Japan simply withdrew after been defeated elsewhere.  China never quite settled and rather quickly, the communists forced the Nationalists onto Taiwan.  There is also good reason to think that the Communists held back on their role in the war to preserve their strength to take on the Nationalists.

All this meant that the communists needed to maintain the unsettled threat of war with Japan as a teachable point in China.  Thus the focus on the lone symbolic islands having no meaningful value not easily acquired elsewhere.

The best strategy for all is for the USA to quietly arrange for the Chinese and the Japanese to do a show landing and stand-down.  Then the two parties can get on with a general treaty makng conference to actually close out any other issues and perhaps reward each other for such good sense.

Otherwise, any other option is beyond stupid.

I went to one of those fancy private dinners last night in Davos, Switzerland.

Like most of the events here at the 2014 World Economic Forum, the dinner was conducted under what are known as "Chatham House Rules," which means that I can't tell you who was there.

I can tell you what was said, though. And one thing that was said rattled a lot of people at the table.

During the dinner, the hosts passed a microphone around the table and asked guests to speak briefly about something that they thought would interest the group.

One of the guests, an influential Chinese professional, talked about the simmering conflict between China and Japan over a group of tiny islands in the Pacific.

China and Japan, you may recall, each claim ownership of these islands, which are little more than a handful of uninhabited rocks between Japan and Taiwan. Recently, the Japan-China tension around the islands has increased, and has led many analysts, including Ian Bremmer of the Eurasia Group, to worry aloud about the potential for a military conflict.

The Chinese professional at dinner last night did not seem so much worried about a military conflict as convinced that one was inevitable. And not because of any strategic value of the islands themselves (they're basically worthless), but because China and Japan increasingly hate each other.

The Chinese professional mentioned the islands in the context of the recent visit by Japan's Prime Minister Shinzo Abe to the Yasukuni Shrine in Tokyo. The Yasukuni Shrine is a Shinto shrine where Japanese killed in Japan's many military conflicts over the centuries are memorialized — including the Japanese leaders responsible for the attacks and atrocities Japan perpetrated in World War 2. A modern-day Japanese leader visiting the Yasukuni Shrine is highly controversial, because it is viewed by Japan's former (and current) enemies as an act of honoring war criminals.

That's certainly the way the Chinese professional at the dinner viewed it.

He used the words "honoring war criminals," to describe Abe's visit to the shrine. And, with contained but obvious anger, he declared this decision "crazy."

The Chinese professional acknowledged that if China asserted control over the disputed islands by attacking Japan, America would have to stand with Japan. And he acknowledged that China did not want to provoke America.

But then he said that many in China believe that China can accomplish its goals — smacking down Japan, demonstrating its military superiority in the region, and establishing full control over the symbolic islands — with a surgical invasion.

In other words, by sending troops onto the islands and planting the flag.

The Chinese professional suggested that this limited strike could be effected without provoking a broader conflict. The strike would have great symbolic value, demonstrating to China, Japan, and the rest of the world who was boss. But it would not be so egregious a move that it would force America and Japan to respond militarily and thus lead to a major war.

Well, when the Chinese professional finished speaking, there was stunned silence around the table.

The assembled CEOs, investors, executives, and journalists stared quietly at the Chinese professional. Then one of them, a businessman, reached for the microphone.

"Do you realize that this is absolutely crazy?" the businessman asked.

"Do you realize that this is how wars start?"

"Do you realize that those islands are worthless pieces of rock... and you're seriously suggesting that they're worth provoking a global military conflict over?"

The Chinese professional said that, yes, he realized that. But then, with conviction that further startled everyone, he said that the islands' value was symbolic and that their symbolism was extremely important.

Challenged again, the Chinese professional distanced himself from his earlier remarks, saying that he might be "sensationalizing" the issue and that he, personally, was not in favor of a war with Japan. But he still seemed certain that one was deserved.

I'm far from an expert on the Japan-China conflict, and I'll leave the analyses of this situation to those who are. All I can tell you is that a respected, smart, and influential Chinese professional suggested at dinner last night that a surgical invasion by China of the disputed islands is justified and would finally settle the Japan-China conflict without triggering a broader war. And that suggestion freaked out everyone in the room.
UPDATE: Around the time I published this post, Gideon Rachman of the Financial Times tweeted the following about an interview with Shinzo Abe, the Prime Minister of Japan. In case you've forgotten, 1914 is when World War 1 started.

Just interviewed Shinzo Abe @Davos. He said China and Japan now are in a "similar situation" to UK and Germany before 1914.

Historical grievances are a real factor. But they are not the only factor.

As a National Geographic article notes:

It's all a bit bewildering—until you consider the rich natural gas deposits of the East China Sea. "Energy is clearly what's driving a lot of Chinese behavior," says Sheila Smith, a senior fellow at the Council on Foreign Relations in Washington, D.C.

One Chinese estimate puts the oil stores in the South China waters at 213 billion barrels, an amount that would exceed the proved reserves of every country except Venezuela (296.5 billion barrels at the end of 2011) and Saudi Arabia (265.4 billion barrels).

That's about ten times higher than a U.S. Geological Survey estimate from the mid-1990s—but even that lower figure puts the South China Sea's oil potential at four or five times that of the Gulf of Mexico.

China estimates that one of the world's largest natural gas deposits, containing some 250 trillion cubic feet, lies all but untapped in the East China Sea. U.S. energy analysts reckon the "proven and probable" reserves there at only 1 to 2 trillion cubic feet—much less than the Gulf of Mexico, but still considerable.