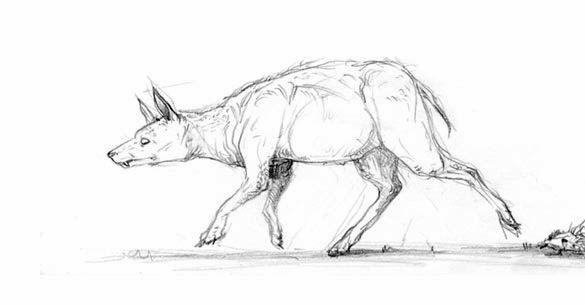 A new voice is added to the Chupacabra identification debate.  The ones outside of Texas and locate is generally better named as a gargoyle instead as I have posted on.  What we clearly have in Texas is some form of wild dog or coyote in some type of hairless mode.  There is also a sighting or more of a coyote like creature with oversized rear lags.

That last one provides an effective predator for hunting jack rabbits.  For that reason it is plausible.  All this is been confused with coyotes suffering from mange.

Whatever we have in Texas, it or they are not bloodsuckers and chickens really work well for all of them.  In the meantime, we may also have the odd gargoyle.

Of course as my readers know, none of this possibly exists.  Our real and developing problem is that the wildlife is returning to encroach on the human space.  Our hot pursuit is largely over.

The Chupacabras: Which One?

As someone who has now been to Puerto Rico on many occasions, I am often asked a question that goes something like this: How did the Chupacabras manage to make its way from Puerto Rico – an island – to the United States, and specifically to the heart of Texas? Well, the fact is that it didn’t. Not at all. In the slightest.

Featured Image by EllisonPav at DeviantArt.

Despite what certain people in the media, eyewitnesses, and elements of the paranormal research community have said to the contrary, the only connection between the original beast of Puerto Rico and the skinny, hairless dog-beasts of Texas is the name they share. And that’s it.

Certain people might argue with me on that point, but the fact of the matter is they would be (and they are) wrong. Indeed, I can say for sure that the Chupacabras didnot swim, fly, stowaway in a ship, hide in the luggage-compartment of a plane, or tunnel its way under the sea-bed from Puerto Rico to the USA. Let’s take a look at the evidence.

Between 2004 (which was the first time I went to Puerto Rico) and the summer of 2013 (my most recent expedition) I have had the good fortune to interview numerous people who have, variously (a) seen the Chupacabras; (b) investigated it antics, actions and attacks; and (c) spoken with eyewitnesses.
Exclusively (no, not near-exclusively, but 100 percent of the time), the people of Puerto Rico have described to me a creature with a body very much like that of a monkey, about the size of a chimpanzee, but without any hair. They also describe the creature as walking on two legs (its back legs, just in case anyone really needs telling, which I seriously hope they don’t!), and having a row of sharp protrusions – not unlike spikes – sticking out of the top of its head, the back of its neck, and the upper part of its back.

Then there are the eyes: very often they are described as large and usually red. And, moving on, there are the wings. Yes, you did read that correct: wings. While I have to  admit that most of the people I have spoken with do not report wings, I have a handful of reports that do reference wings. In some cases, they are described as bird-like (that’s to say feathery), and in others as bat-like.
So, with that said about the monster of Puerto Rico, now onto my home state of Texas. Not only have I been able to check out the Puerto Rican reports extensively, but living in the heart of the Lone Star State, I have been able to do exactly likewise with the Texan version – many reports of which surface in and around the wooded and rural areas of San Antonio and Austin. I have also investigated reports into southern Oklahoma, thus demonstrating that the creatures are spreading.
Now, let us forget the rumors, the tall-tales, and the friend of a friend accounts. Instead, let us focus on the facts. There are many differences between the creature of the island and that of Texas. But one is very significant: a number of the Texan ones have been shot, run over and – as a result – autopsied. I even have the skull of one of them sitting on one of my CD racks (no word, however, on which band it prefers the most).
DNA testing has shown the animals, chiefly and conclusively, to be coyotes, but sometimes mixed with wolves and often Mexican wolves. Now, the skeptics would say these animals are just poor, unfortunate, sickly creatures with a very bad case of mange. But, is it really that simple? I suggest that no, it’s not. I have seen and examined some of these bodies and I have seen some very interesting footage and photos - some of which is not yet in the public domain.

Mange is caused by a mite, one which goes for either the follicles of the hair or the skin. For the unfortunately affected animal, mange is a condition that results in hair-loss and intense irritation and itching. Such irritation very often reaches the point where the animal will scratch and scratch itself until it bleeds – sometimes profusely – and infection sets in. Death in the wild is quite common in such cases.

The problem with the mange theory, however, is that I have seen many such examples where the animals are completely free of hair, whereas in many cases of mange, the hair-loss is patchy. The pups are just the same. They, too, seem to be very happy having developed without hair (unlike me, who has to shave it all off every day!). And I have seen cases where there is zero evidence of scratching, cuts or infection. So, yes it’s hair-loss. But maybe it’s not mange.

Then there are the limbs. In some reports (but certainly not all) the front legs appear to be slightly (and sometimes significantly) shorter than is normal for coyotes, giving them a curious kangaroo-like movement when they run. The clearest example I came across of this occurred when I was in Tecumseh, Oklahoma in the summer of 2010.

Now we come to the most important fact of all about the Texas Chupacabras, which makes it very different to its bipedal, Puerto Rican pal: it runs on all-fours. Well, of course it does: it’s a coyote! But, the issue of the limbs and the complete hairless nature of it still suggest something odd is going on – such as a genetic mutation, for some unfathomable reason.

So, even though – in my personal opinion – there is still a major mystery to be resolved about the animals of Texas, they are nothing to do with the Puerto Rican animal, whose name it shares. And that brings me to a deeply important point. It’s also my final point: why, exactly, do they have the same names?

Very simple: Chupacabras is Spanish for Goat-Sucker. It gets its name from the fact that when sightings began on Puerto Rico in the 1990s, goats were the animals most regularly attacked and killed by the Chupacabras, along with other small animals, such as chickens.

The Texas Chupacabras also has a taste for small animals, and is rumored to enjoy the taste of blood – and lots of it. So, it was not so much the appearances of the two creatures that provoked the same name. Rather, it was the nature of the predations and attacks that led people to assume it was the same animal.

Do I care that the hairless coyote-things of Texas have become known as the Chupacabras? No, I couldn’t care less if I tried. Plus, it’s good for tourism. They have as much right to the moniker as do the unknown entities of Puerto Rico. Providing, of course, that people understand that one important issue: just because the creatures share the same name does not make them the same animal.
Posted by arclein at 12:00 AM