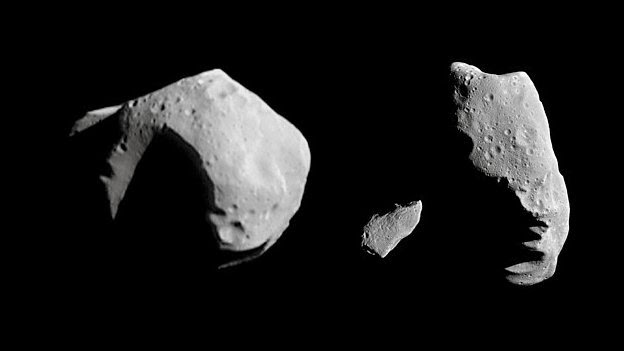 At least they are tackling the issue of mineral content.  Here I am far more optimistic.  We know that the bulk of planetary cores are heavy elements and that implies that the bulk of available asteroid mass will be by inference metallic.  Even without that been true, we will still go after the metallic ones.

That then begs the next question of why should we bother?  I actually do not think that we want to haul mass down to Earth.  It is far cheaper and far easier to mine here.  However in space itself and on the surface of the moons we have the same problem as on Earth where light elements are concentrated on the surface.  Thus refining metal in the Asteroid belt is a creditable proposition.

We will naturally head to the asteroid belt to locate a large metallic asteroid which we can hollow out to provide a safe habitat and build fabrication facilities for an expanding space industry.   I also suspect that this has even been done and we can save ourselves great effort when we get there.

Otherwise this is all waiting for the build of viable gravity lifters which is at least a couple of decades out.  And no, we will not be doing this with reaction engines at all if it can be helped.

A new study might contain some bad news for companies hoping to mine asteroids for their valuable ores.

In the last couple of years, start-ups - including one backed by Sir Richard Branson - have announced plans to extract resources from space rocks.

But calculations by Dr Martin Elvis suggest our cosmic neighbourhood might not be such a treasure trove after all.

The Harvard astrophysicist argues just 10 near-Earth asteroids might be suitable for commercial-scale mining.

But Eric Anderson, co-founder of asteroid mining company Planetary Resources, told BBC News that the values quoted in the study were off - conservatively - by a factor of 100.

Dr Elvis, from the Harvard-Smithsonian Center for Astrophysics in Cambridge, US, has developed an equation to estimate the number of asteroids in the Solar System that could be exploited in a cost-effective way.

His research paper is in press at the journal Planetary and Space Science, and has been posted on the pre-print server Arxiv.org.

In 2012, Planetary Resources, backed by billionaire investors including Hollywood director James Cameron as well as Google executives Larry Page and Eric Schmidt, unveiled their vision of using robotic spacecraft to squeeze the chemical components of fuel as well as minerals out of asteroid rocks.

Several months later, the company was joined by a competitor - Deep Space Industries - which plans to use low-cost spacecraft called Fireflies and Dragonflies to reconnoitre and return samples from near-Earth asteroids.
Advocates of asteroid mining say it could turn into a trillion-dollar business, but some experts have been sceptical of the idea.
Concentrating efforts
While acknowledging the uncertainties, Dr Elvis worked out the factors that would make an asteroid commercially viable to mine and what fraction of known space rocks met these requirements.
He assumed that mining operations would want to focus on iron-nickel asteroids (known as M-type), considered the most promising targets for finding so-called platinum-group metals. These include platinum, along with iridium, palladium and others.

These are rare in the Earth's crust because they dissolve in molten iron, instead being mainly concentrated in the planet's core. Platinum and palladium are the most economically important, having a wide range of uses in industry. But according to the analysis, just 1% of near-Earth asteroids are rich in these elements.

Suitable asteroids also need to be relatively easy to reach, further narrowing the pool by ruling out all but the nearest objects to Earth. The operative parameter here is delta-v - the change in velocity needed to send mining equipment to the target and return with a larger mass of ore.

The size of the target is also a factor; the paper suggests it wouldn't be worth mining asteroids smaller than about 100m because the total value of the ore they would produce wouldn't be enough to cover the costs of a space mission.

However, Dr Elvis points out that the ore values in his analysis range from a low of $800m to a high of $8.8bn.

"Such a large range of values could greatly change the profitability of a venture, making more accurate assays necessary," he explained.

But Eric Anderson pointed to what he said were key errors in the study.
"Number one, the author points to an assumption of only wanting to go to M-type asteroids," he told BBC News.

"Assuming we were only going after platinum-group metals, the most platinum-rich asteroids are the C-class ones." Fragments of these asteroids are known as carbonaceous chondrites when they fall to Earth.

In addition, Planetary Resources' engineers were prepared to include objects that required a delta-v of 7km/s, a more ambitious limit than the 4.5km/s used in Dr Elvis' study.

"We've been studying this with some of the brightest people in the world for the last three years. We are intimately familiar with the risks and other factors.

"We have only discovered 1% of the asteroids in the Solar System - and we are discovering them at a larger and larger rate. We discover two or three asteroids a day. If we get from 1% to 10%, then the 650,000 asteroids we have discovered jumps to 6.5 million."

The analysis also looked at the number of asteroids that could be profitably mined for water, which could be used in space for life support or separated into hydrogen and oxygen for rocket fuel. The number of suitable water-bearing asteroids larger than 100m was around 18.

Dr Elvis told BBC News: "I want to stress that my paper does not mean that there is no commercial future for asteroid mining. It does mean that gold mines are rare, which shouldn't be too surprising. Not every mountain on Earth hides a fortune, and not every flying mountain in space will either."

Prof Alan Fitzsimmons, from Queen's University Belfast, UK, who was not involved with the study, said the calculations were "plausible", but that he would have placed even more emphasis on the uncertainties.
"The make-up of small near-Earth asteroids is still relatively unknown," he told BBC News.

"There are large uncertainties in the total number of platinum group-rich asteroids that come near the Earth. This is because it is still difficult to unambiguously determine the mineral makeup of small asteroids.

"We know they exist, as pieces are found as meteorites on Earth. The small asteroid that formed Meteor Crater in Arizona some 50,000 years ago was one such object."

Dr Elvis added: "Any individual number in my paper can be improved on (and I discuss this at length), but the bottom line is not likely to change.

"I talk about maybe reaching 100 platinum-rich asteroids if we relax the tough rocketry limitation I imposed (delta-v), but getting to 1,000 will be hard, until we can get to the Main Belt asteroids."

Prof Fitzsimmons said: "All-in-all, asteroid mining may be a plausible future space industry. But it would require significant capital investment to start such an industry. The practical problems of mining, refining and transport back to Earth are still unsolved right now."