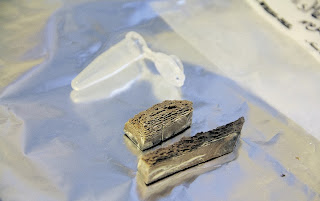 This actually is huge.  We can now consider that the time gap of one million years can be thoroughly sampled unlike the present odd snap shot protocol.  It also means that species resurrection has just become a plausible proposition.  After all it has become possible to map an entire genome and to correctly interpolate as needed to a satisfactory level of reconstruction.

From there it becomes the art of producing a viable egg and we are well down that road.  It also means that we will have multiple samples of any genome of interest.

Thus the prospect of recalling all our recently extinct species stops been a pipe dream.  Once an island is cleansed of its rat population and other foreign interlopers, repopulation becomes a possibility.  That is a worthy prospect.

From a tiny fossil bone found in the Yukon, scientists have reconstructed the genome of a horse 780,000 years old - nearly 10 times older than any previous animal mapped.

Scientists have reconstructed the genomes of giant Ice Age animals that existed about 800,000 years ago using a new technique that could boost our understanding of ancient man. Through DNA analysis, researchers were able to create the genome - which contains a mammal's hereditary information - of a huge cave bear and a large horse.

The breakthrough came thanks to next-generation DNA sequencers which can analyze tens of thousands of DNA fragments from remains found buried in ice to reveal how they all fitted together when the animal was alive.

Even mammals that died in moderate climates, whose remains are less well preserved, could now have their genomes reconstructed.

Ludovic Orlando, professor of genetics at the Natural History Museum of Denmark, led a team that managed to build the genome of a horse which lived on the plains of Canada up to 780,000 years ago. His group found that the predecessor to today's horses, donkeys and zebras first walked the Earth between four and 4.5 million years ago - twice as long ago as experts had believed.

The breakthrough raises the prospect of reconstructing the DNA of giant beasts that roamed Earth during the Pleistocene epoch up to 2.6 million years ago.

At that time, six-metre-long ground sloths could be found in the Americas as well as sabre-toothed cats and threemetre-long beavers, while in Europe and Asia, there were giant rhinoceroses, cave lions, Irish elk and deer.

Alongside Orlando's work, a separate group of researchers was able to reconstruct the genome of a giant bear that died in northern Spain around 400,000 years ago.

The team overcame the fact that the remains were found in a warmer climate, and therefore in a further state of decomposition than frozen remains, by successfully relying on DNA produced by cellular organelles called mitochondria.

"This shows DNA can survive for hundreds of thousands of years outside of permafrost and opens the prospect of making more samples from this time period accessible to genetic studies," said their report.

The genomes reconstructed are more than 10 times older than anything achieved in the past and are likely to prompt a wave of new research in the field.

With academics from across the world due to meet this week at the Royal Society in London to discuss developments in DNA mapping, some are predicting that ancient humans will be the next to enter the spotlight.

"Neanderthals are an obvious target because they were our nearest relative," said Erika Hagelberg, professor of evolutionary biology at Oslo University in Norway, who organized the Royal Society meeting.

"There are a lot of samples so we can now start looking at them in detail, including how their genes have been passed down to modern humans," she added.

Some scientists are even predicting that the genome of Homo erectus, pre-Neanderthal man, could be reconstructed.