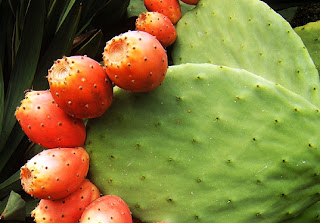 This is a very acceptable solution to water purification.  One takes bad water from any river and you bring it to a boil with a slice of prickly pear thrown in to provide the natural flocculent.  Everyone can figure this out and it fits right into the daily kitchen routine.
The resulting water can then be settled and used immediately for making tea or cooking.  Residual material will be low enough for the digestive system and immune system to resolve handily.
My guess is that folks will really get good at cooking with this new form of staple process water.  It must be flavored.
Water is always an issue in the rural community simply because there is no possibility to tie in to a grid and the available water is normally suspect unless a deep expensive well is put in place.
Most folks are already boiling water in such circumstances.  It will be no trick to grow a garden patch row of prickly pear.
One other issue.  Once the bacterial load is reduced sufficiently, the bodies natural immune system is quite able to handle the load and keep the individual healthy and it is likely safer that way.  we have gotten away from that understanding.
Cactus gum could make clean water cheap for millions
27 April 2010 by Helen Knight
FORGET expensive machinery, the best way to purify water could be hiding in a cactus. It turns out that an extract from the prickly pear cactus is effective at removing sediment and bacteria from dirty water.
http://www.newscientist.com/article/mg20627576.100-cactus-gum-could-make-clean-water-cheap-for-millions.html
Many water purification methods introduced into the developing world are quickly abandoned as people don't know how to use and maintain them, says Norma Alcantar at the of in . So she and her colleagues decided to investigate the prickly pear cactus, Opuntia ficus-indica, which 19th-century Mexican communities used as a water purifier. The cactus is found across the globe.
The team extracted the cactus's mucilage - the thick gum the plant uses to store water. They then mixed this with water to which they had added high levels of either sediment or the bacterium Bacillus cereus.
Alcantar found that the mucilage acted as a flocculant, causing the sediment particles to join together and settle to the bottom of the water samples. The gum also caused the bacteria to combine and settle, allowing 98 per cent of bacteria to be filtered from the water (Environmental Science and Technology,DOI: 10.1021/es9030744). They now intend to test it on natural water.
Householders in the developing world could boil a slice of cactus to release the mucilage and add it to water in need of purification, says Alcantar. "The cactus's prevalence, affordability and cultural acceptance make it an attractive natural material for water purification technologies."
But Colin Horwitz of GreenOx Catalysts in , says many issues remain, including how much land and water is needed to grow cacti for widespread water purification, and how households will know all the bacteria have been removed.
Posted by arclein at 3:54 AM