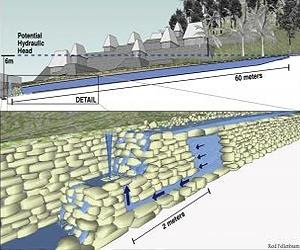 Arm chair thinkers have often argued that hydraulic engineering was difficult to somehow imagine and implement.  Yet I argue the opposite.    It is the one technology that can be modeled on a table top in clay and shown to work.  Arguing that canal locks are a major invention is a good example.  Everyone who actually needed them built them immediately.  The problem was that they were rarely needed.  They required a large flow of traffic to justify the expense of maintenance.   Until then skidding worked fine.
In this case we have an impressive complex, possibly a palace, with a system of built in fountains.  Sounds pretty normal to me.  And yes, it was necessary to provide pressure to operate the fountains.  They found a way.
I expect we will find much older examples in .
Also the stone structure could have supported a wood tube system easily to contain pressure as needed.  Not overly lasting, but sufficient for a year’s effort at least.  We are spoiled by better solutions.
Maya Plumbing, First Pressurized Water Feature Found In
by Staff Writers
(SPX) May 05, 2010
http://www.terradaily.com/reports/Maya_Plumbing_First_Pressurized_Water_Feature_Found_In_New_World_999.html
http://www.spacedaily.com/images-lg/maya-piedras-bolas-aqueduct-lg.jpg
This is a depiction of Piedras Bolas aqueduct functioning as a fountain. This illustrates one plausible explanation of how the feature used water pressure. Due to destruction of the aqueduct, exact details of the its use are unknown. Note that during the monsoon, excess runoff flows over the freature while the buried conduit continues to function. Credit: Reid Fellenbaum
A water feature found in the Maya city of Palenque, Mexico, is the earliest known example of engineered water pressure in the new world, according to a collaboration between two Penn State researchers, an archaeologist and a hydrologist. How the Maya used the pressurized water is, however, still unknown.
"Water pressure systems were previously thought to have entered the with the arrival of the Spanish," the researchers said in a recent issue of the Journal of Archaeological Science.
"Yet, archaeological data, seasonal climate conditions, geomorphic setting and simple hydraulic theory clearly show that the Maya of Palenque in Chiapas, Mexico, had empirical knowledge of closed channel water pressure predating the arrival of Europeans."
The feature, first identified in 1999 during a mapping survey of the area, while similar to the aqueducts that flow beneath the plazas of the city, was also unlike them. In 2006, an archaeologist returned to with a hydrologist to examine the unusual water feature. The area of was first occupied about the year 100 but grew to its largest during the Classic Maya period 250 to 600. The city was abandoned around 800.
"Under natural conditions it would have been difficult for the Maya to see examples of water pressure in their world," said Christopher Duffy, professor of civil and environmental engineering. "They were apparently using engineering without knowing the tools around it. This does look like a feature that controls nature."
Underground water features such as aqueducts are not unusual at . Because the Maya built the city in a constricted area in a break in an escarpment, inhabitants were unable to spread out. To make as much land available for living, the Maya at routed streams beneath plazas via aqueducts.
"They were creating urban space," said Kirk French, lecturer in anthropology. "There are streams in the area every 300 feet or so across the whole escarpment. There is very little land to build on."
These spring-fed streams combined with approximately 10 feet of rain that falls during the six-month rainy season also presented a flooding hazard that the aqueducts would have at least partially controlled.
The feature the researchers examined, Piedras Bolas Aqueduct, is a spring-fed conduit located on steep terrain. The elevation drops about 20 feet from the entrance of the tunnel to the outlet about 200 feet downhill.
The cross section of the feature decreases from about 10 square feet near the spring to about a half square foot where water emerges form a small opening. The combination of gravity on water flowing through the feature and the sudden restriction of the conduit causes the water to flow out of the opening forcefully, under pressure.
"The conduit could have reached a theoretical hydraulic head limit of 6 meters (about 20 feet)," said Duffy.
At the outlet, the pressure exerted could have moved the water upwards of 20 feet.
"The experience the Maya at had in constructing aqueducts for diversion of water and preservation of urban space may have led to the creation of useful water pressure," said French.
The Piedras Bolas Aqueduct is partially collapsed so very little water currently flows from the outlet. French and Duffy used simple hydraulic models to determine the potential water pressure achievable from the Aqueduct.
They also found that Aqueduct would hold about 18,000 gallons of water if the outlet were controlled to store the water. One potential use for the artificially engineered water pressure would have been a fountain.
The researchers modeled the aqueduct with a fountain as the outlet and found that even during flood conditions, water would flow in the aqueduct, supplying the fountain, and above ground in the channel running off the slope. Another possibility could be to use the pressure to lift water onto the adjacent residential area for use as wastewater disposal.
"The palace has features that suggest something similar," said French
Posted by arclein at 3:16 AM

Very interesting points in your blog it sure cleared many questions that I may have had.Evolution does favor complexity.