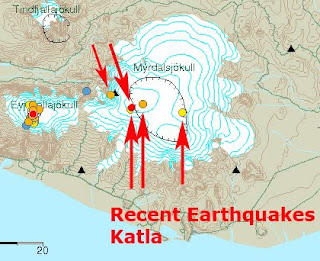 Not a lot to say yet, but this is not a volcano that is dormant and the prospect of a major eruption is quite real.  It is still going to takes us by surprise no day.
The worst case scenario is in fact a worst case scenario that will be an order of magnitude larger than next door. Everything you can imagine becomes possible.
Katla Volcano Update 21 May 2010
http://modernsurvivalblog.com/natural-disasters/katla-volcano-update-21-may-2010/
The earthquakes at the Katla volcano site appear to possibly be increasing in frequency as of this moment (time will tell however). Since May 17 there have been four earthquakes at or very near Katla, while a 5th just on the edge of the Myrdalsjokull glacier.
Although 4 or 5 earthquakes at the volcano site in 4 days does not indicate a drastic change in pattern, the interesting notation at the moment is the fact that  the two most recent earthquakes occurred within 3 hours of each other on 21 May, 2010, at depths of 5km and 13km. That in itself is an increase in occurrence. It may be an anomaly, but it justifies keeping one eye on Katla, the big sister of Eyjafjallajokull.
What do these volcanic earthquakes tell us about what is going on at the Katla volcano?
One type of volcanic earthquake may indicate that changes are occurring due to magma moving in to an area of the rock which changes the pressure around it. At some point, the rock will break or move. If this type of earthquake becomes frequent, and a lot of earthquakes begin occurring or swarming (Earthquake swarms are when we suddenly start seeing clusters of earthquakes in the same general area over a relatively short period of time), it may be a precursor warning that an eruption is about to happen.
What we are seeing at Katla, in my opinion is NOT cause for immediate alarm, but it is noteworthy to observe this recent activity and to stay up to date with what is happening there.
There is something going on beneath the ice.
Uh-oh! Katla Volcano Just Rumbled
Katla historically erupts following the eruption of Eyjafjallajokull (April 14), is possibly 10 times more powerful, and has the potential to cause worldwide disruption.
Earthquake Map Source: Icelandic Meteorological office – their maps show only last 48 hours, so I have kept a separate view to include the Katla quakes since 17-May-2010 as of this post date
Posted: May 21, 2010 | By: Modern Survival Blog
Filed under: natural disasters
Posted by arclein at 4:42 PM