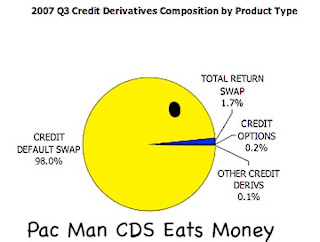 In the end we have another round of sophistry hiding the fact that it is all about third parties taking bets on a horse.
Markets work well as a rule based game.  They fail miserably when rules are constantly changed out by the legal profession to satisfy the financial whims and greed of a client.  This is the creation of non reserve insurance and the losses have been horrific.
Obviously a no interest bet opens the door wide to outright insurance fraud because there is no downside.  After all, the perp is hidden offshore.  It would have taken the criminals exactly one sales pitch to figure this one out.
Naked short selling, now naked insurance all have one thing in common.  The gambler can win if he is able to destroy the victim.  True stock manipulation begins with short selling and its ilk.  Gamblers are proactive in this regard however they cloud their actions.
The choicest irony was watching Lehman bros scream about the practice as they went down.
It is completely possible to reform the security trading industry but no one ever would let someone who had a clue near the game.  The victims continue to be citizens and the economy in general because a huge amount of capital is simply diverted away from its intended destination.
If a thousand investors decide to support a new energy source with ten million dollars and this money is diverted into a short selling syndicates account and the company is then starved into a profoundly disadvantageous financing that provides only a fraction of the money, while the balance is appropriated by the syndicate, then by most natural measures, a fraud has taken place.
This is not clearly blocked by the SEC who only squawks once in a while.
Naked Truth on Default Swaps