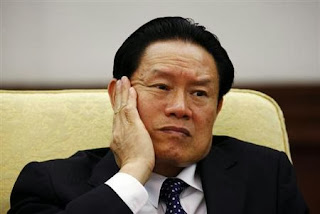 It appears that losing faction in the protracted power struggle in China has been torn out from top to bottom.  I am sure that this faction is also guilty of generating provocative military activities over the past year as they came under attack.  This has so far wisely been ignored.

The most serious alleged crimes engaged in by this faction are the deliberate diversion of so called criminals into the organ harvesting business.  Where this true, and it became publically understood and accepted, it would represent the greatest loss of face imaginable for the regime.

That alone explains the complete loss of influence of this particular faction.  Otherwise, what they are been charged with can be described as petty crime at this level were all are as guilty.

In the meantime, it is in fact timely that cadre greed was reined in sharply.  As we know, when it comes to blind greed, there is literally no limit or sense and must be ended by nasty crashes or the firing squad.

BEIJING (Reuters) - China has put Zhou Yongkang, one of the most powerful politicians of the last decade, under virtual house arrest while the ruling Communist Party investigates accusations of corruption against him, several sources said on Wednesday.

Zhou is the most senior official to be ensnared in a graft scandal since the Communists came to power in 1949. He was the domestic security tsar and a member of the party's Politburo Standing Committee - the pinnacle of power in the country - when he retired last year.

"Zhou Yongkang's freedom has been restricted. His movements have been monitored," one source said, adding that he cannot leave his Beijing home or receive guests without prior approval.

Zhou is being investigated for violating party discipline, official jargon for corruption, the sources said. They did not say what the specific allegations were.

Xi was installed as head of the party just over a year ago, and as president in March, and the investigation illustrates his growing power and confidence that he can manage any rift that may ensue.

In ordering the investigation, Xi has broken with an unwritten understanding that members of the Standing Committee will not be investigated after retirement.

But Xi has yet to decide whether Zhou would be publicly prosecuted, pending completion of the internal probe, the sources said. Xi has declared war on corruption, vowing to go after powerful "tigers" like Zhou as well as lowly "flies".

"Xi has pulled out all the tiger's teeth," a second source said, referring to the downfall of Zhou's men, including Jiang Jiemin, who was the top regulator of state-owned enterprises for just five months until September when state media said he was put under investigation for "serious discipline violations".

Jiang was previously chairman of state-owned China National Petroleum Corp (CNPC) - Zhou Yongkang's power base - as well as one of its subsidiaries, oil-and-gas behemoth PetroChina <0857 .hk=""> <601857 .ss="">. Zhou served as CNPC's general manager from 1996-1998, having risen through the ranks.

"Zhou Yongkang is a toothless tiger and tantamount to a dead tiger. The question is: will Xi skin the tiger?" the source said, referring to a trial.

Political analysts say such an indictment and a trial would instill fear in other retired leaders and the party's 80 million members, worsening infighting among rival political factions.

Jonathan Fenby, director of China research at analyst group Trusted Sources, said any form of public trial of Zhou would be "potential for embarrassment ... given his long tenure at the top".

The Chinese government has neither confirmed nor denied Chinese-language media reports in Hong Kong, Taiwan and the United States that Zhou has been arrested on charges of corruption and other crimes.

Zhou and his family could not be reached for comment. It is not clear if they have lawyers.

The cabinet spokesman's office, which doubles as the party's public affairs office, did not respond to a request for comment.

Zhou was a patron of the once high-flying politician Bo Xilai, who was jailed for life in September for corruption and abuse of power - the worst political scandal since the 1976 downfall of the Gang of Four at the end of the Cultural Revolution.

"Xi Jinping and (Premier) Li Keqiang hate Zhou Yongkang as he was the only standing committee member who opposed ousting Bo Xilai. They are gunning for Zhou," said a source who has ties to the military.

Bo's career was stopped short last year by the attempted defection of his estranged police chief who implicated Bo's wife in the murder of a British businessman over a business dispute. Bo's wife and his former police chief have been convicted and jailed.

"Zhou's men have been sidelined," another source said.

"The Central Commission of Political Science and Law has been cleansed of Zhou's men," the source said, referring to the powerful party body once headed by Zhou that oversees the police force, the civilian intelligence apparatus, judges, prosecutors and paramilitary police.

The movements of Zhou's eldest son, Zhou Bin, have also been restricted while he helps with the corruption investigation that has implicated Jiang, the regulator of state-owned enterprises.

The elder Zhou retired as domestic security tsar and from the standing committee during a sweeping leadership reshuffle last year. During his five-year watch, government spending on domestic security exceeded the defence budget.

He was last seen at an alumni celebration at the China University of Petroleum on October 1.

He was also among party leaders who offered condolences or sent flowers to the family of a respected educator who died last month, state media reported on November 26.

Hong Kong's South China Morning Post newspaper reported in late August that the leadership had agreed to open a corruption investigation into Zhou.

But sources with ties to the leadership told Reuters at the time that Zhou was merely helping authorities with the investigation into state energy companies and, contrary to media reports, was not the target then.

That changed after Xi ruled that no one was above the law.

Zhao Hongzhu, one of the party's top anti-corruption officials, declared in October that anyone who violated party discipline or broke the law would be punished "regardless of who it involved, how much power he has or how high his position is". (Editing by Raju Gopalakrishnan)

YOU WILL DIE IN YOUR SINS

Many, who profess to be Christians, claim the Jesus is just one of many ways to heaven. If men would simply believe that the Bible is the only inerrant source for truth they could not reach that conclusion.

If you do not believe that Jesus is the Christ you will die in your sins. No man-made creed book can change that fact. To reject Jesus as the Messiah is the clear path to dying without forgiveness from sins.

It does not matter how many Bible commentators or self-proclaimed Bible scholars believe Jesus is one of many ways to heaven, Jesus is the only Messiah.

John 14:6 Jesus said to him, "I am the way, the truth, and the life. No one comes to the Father except through Me. (NKJV)

Pope Francis says atheists who do good works can go to heaven. Billy Graham proclaims that you do not even have to know the name of Jesus to be part of the body of Christ. Joel Osteen say he does not know if unbelievers will be lost or saved because he cannot judge. These professing Christians are not alone in their views. How sad is that?

PEW FORUM OF RELIGION AND PUBLIC LIFE: 57% of the evangelical church believes there are many religions that lead to eternal life.

IF YOU TRUST THE BIBLE AND THE BIBLE ALONE FOR THE TRUTH, YOU WILL BELIEVE THE WORDS OF JESUS. "IF YOU DO NOT BELIEVE THAT I AM HE YOU WILL DIE IN YOUR SINS."