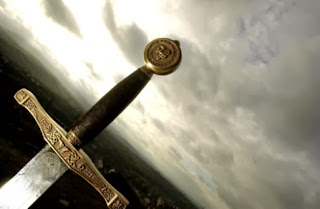 It is reasonable that Arthur was a warlord positioned north of Hadrian’s Wall whose family and household was cut loose when the Romans withdrew.  They would have seen themselves as Roman Allies at the least.

It is also reasonable that a similar argument can be made for Wales at the same time with quite as much material evidence to support the claim.

It is even reasonable that the two story lines became largely entangled over time and covered two separate personalities reacting in the same way to the military vacuum.  Any such well positioned warlord and family would and could dominate for perhaps generations from those two natural refuges.

That and a lot of good stories made for ample material for Geoffrey of Monmouth to lift and wrap into a history of England.

It appears that the weight of evidence is placing Arthur and Lancelot ( The Angus ) in this southern stretch of Scotland and this understanding will ultimately prevail.  Avalon becomes the obvious Iona.

WELCOME to MacCamelot. King Arthur was a Scottish, pre-Christian warlord whose remains are buried on Iona, according to a new book by a Scots historian.

Author Adam Ardrey claims that instead of the romantic English king of legend who lived at Camelot – which is often said to be Tintagel in Cornwall or in Wales – Arthur was actually Arthur Mac Aedan, the sixth-century son of an ancient King of Scotland, whose Camelot was a marsh in Argyll.

He also suggests that Arthur pulled the sword Excalibur from a stone at Dunadd near Kilmartin, died near Falkirk and was buried on the Hebridean island of Iona, which he declares to be Avalon.

Ardrey, an amateur historian who works as an advocate in Edinburgh and previously wrote a book claiming Merlin the wizard was actually a politician who lived in the Partick area of Glasgow, spent years investigating his theories and says that they can be proved “beyond reasonable doubt”. The assertions in his book Finding Arthur: The True Origins Of The Once And Future King are strengthened by the discovery in 2011 of what some experts believe is King Arthur’s round table in the grounds of Stirling Castle.

Ardrey says he not only believes Arthur is buried in Iona but would love to see the site excavated to look for proof.

“Iona fits all the criteria. It’s an island where hundreds of kings were buried. Some say 128. Other members of Arthur Mac Aedan’s family were buried there too. I say Arthur was also buried there.”

Ardrey states that Camelot is a nondescript marshy area north of Dunadd, an ancient hill fort in ­Argyll, where the sword in the stone “scene” was enacted.

He believes that the number of connections between Argyll and Arthur are so numerous that he has met Argyll and Bute Council several times in the hope of establishing an Arthur tourist trail in the area.

A spokesperson for the council said: “Argyll and Bute’s rich and varied cultural history attracts many admirers  and Dr Ardrey’s books are an example of that. The council has not entered into any agreement with Dr Ardrey.”

He said that he also believes Arthur’s 12 battles were fought on different sites across Scotland, including Stow in the Borders, where he says the Battle of Guinnion took place, and the Battle of the City of the Legions, which he says was fought on the site of the Roman fort of Trimontium in Melrose.

“The litmus test for Arthur is the 12 battles and the battle list,” he said. “I was able to identify all of them geographically, as well as historically place them in context. Six of them are even in a straight line. Everything fits into context.”

He also asserts that the Battle of Camlann, at which Arthur was believed to have been killed, was fought at Camelon, near Falkirk, just 12 miles south of Stirling and the Round Table.

The legend of Arthur developed in the Middle Ages largely through the popularity of Historia Regum Britanniae, a 12th-century text written by Geoffrey of Monmouth that related his story in fanciful and mythical terms.

Many historians have attempted to link Arthur with Cornwall and Tintagel Castle, and in 1998 an ancient stone bearing a sixth-century inscription similar to the name Arthur was unearthed at the castle, the mythical birthplace of the legendary king.

It was hoped that the discovery could prove that King Arthur had his headquarters at the site of the ruined castle on the north coast of Cornwall, but the findings – of a piece of slate inscribed with the name Artognov – Latin for the English name Arthnou – remained inconclusive.

However, in 2011 it was believed that Arthur’s Round ­Table may have been ­unearthed by Glasgow University archaeologists investigating the King’s Knot in the grounds of Stirling Castle.

The book also asserts that Arthur became the victim of an establishment conspiracy which was determined to recast him as an English Christian hero.

It also claims that, as a Scottish man of the druidic “Old Way”, he was the last of his kind holding out against a zealous Christian onslaught.

“I am hoping the book provokes debate and discussion,” said Ardrey. “But if I’m right, then 100 years of British history needs to be rewritten.”