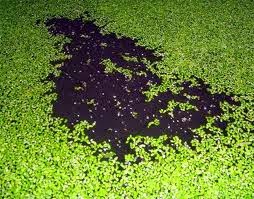 I have recently been introduced to the duckweed protocol. It is hugely productive and must be harvested every ten days. The processing suggested were starts with milling and fermentation convert the plus thirty percent starch into ethanol which naturally increases the protein content remaining to over 70%.

Thus a harvesting system produces a shippable biomass that can then be milled, fermented and separated into an alcohol stream, a meal stream and a spent water feed which goes directly back into the production pond were the contained nutrients are reused.

This is designed around pig operations and their sewage lagoons, but can reasonably be used to handle all manure situations.

The speed of the process is particularly encouraging. In ten days a hypothetical charge has been consumed into the living lagoon and that lagoon has produced the matching alcohol and feed protein.

It is missed here by the author. But tilapia are vegetarians who eat mostly duckweed or its kissing cousin. Thus in native ditch and bank agriculture the tilapia consumed the rapidly growing vegetation to produce a steady stream of protein.

Implementation of native technique merely awaits proper equipment for grooming ditches and technology such as this to harvest the duckweed in the ditches. The added benefit is that grooming entails lifting the muck accumulation and putting it back up on the bank to refertilize.

New Source of Protein Can Replace Menhaden Fishmeal in a Variety of Farmed Fish Species
2010 press release
MELBOURNE, FL — November 4, 2010—PetroAlgae Inc. (OTCBB: PALG), a leading renewable energy company that licenses its commercial micro-crop technology globally, announced today that a third party study done by the Aquaculture Research Institute at the University of Idaho has found that PetroAlgae protein concentrate (PPC) produced as a coproduct along with the renewable fuel feedstock by the company’s micro-crop technology system can replace menhaden fishmeal protein at levels up to 100% in feeds for tilapia.

“We are very encouraged by the results of this extensive study because they point to PetroAlgae protein as a highly desirable replacement for fishmeal at a time when feed demand is expected to increase dramatically in the face of limited traditional supply,” said Dr. Ronald W. Hardy who conducted the study.

PetroAlgae’s micro-crop technology employs indigenous, aquatic micro-organisms suitable to local climates and is designed to enable its technology licensees to produce a cost-effective alternative to fossil fuels as well as a high-value protein co-product, while absorbing carbon dioxide from greenhouse gas emissions. Micro-crop farms utilizing PetroAlgae’s technology are highly productive and grow new sources of protein locally that are not genetically modified and are resistant to local diseases. In addition to its uses in the aquaculture industry, the company expects PPC to be suitable for nursery swine, poultry, and, ultimately, for direct human consumption.

• PPC is capable of replacing fishmeal protein up to 100% in feeds for tilapia, without the need for amino acid supplementation or other adjustments to the formulation, and can provide growth performance similar to fishmeal.
• PPC, when combined with fishmeal, supported higher fish weight gain than with fishmeal alone, suggesting a positive synergistic effect most likely related to favorable amino acid balance in the feed.
• PPC does not change the composition of tilapia and does not increase tilapia mortality rates. Together, these findings indicate that PPC is a safe feed ingredient with no toxic indications after nine weeks of feeding.
• PPC yields nutrients that are highly digestible, demonstrating significant potential as a feed component for other farmed fish species.
• PPC has excellent suitability for producing low pollution feeds that reduce environmental contamination in dense aquaculture areas.

Because the fishmeal industry’s main production center is Latin America, far from Chinese and European consumption centers, fishmeal is one of the world’s most internationally traded commodities. The International Fishmeal and Fish Oil Association, a trade body, estimated that each ton of fishmeal travels an average of 5,000 kilometers to reach its end-user in the aquaculture industry. By comparison, PPC allows for a shortened supply chain and reduces business risk, because micro-crop farms using PPC can be sited locally, close to consumption centers. Therefore, PPC has the ability to reduce the industry’s carbon footprint, and its steady state production allows for greater quality control and just-in-time inventory management.

PPC’s other environmental benefits include lower pressure on ocean fisheries, lower risk of zoonotic disease, a positive carbon balance and a route to renewable fuel that is additive to the food and feed chain.

“We are very excited with the findings of Dr. Hardy and his team at the University of Idaho, said Dr. John Scott, Chairman and Chief Executive Officer of PetroAlgae. “Their reputation puts them at the top of their field, and we can proceed with a high degree of confidence to help our licensees commercialize PetroAlgae protein concentrate as a high-value replacement to traditional fishmeal in both quality and environmental impact.”

New source of 61% organic protein produced from local aquatic plant,    35% protein currently in plant is increased by removing the 43% starch by certified organic process,  Ethanol and Lysine are the by products

Certified Organic wastewater from process supplies 100% nutrition to the Aquatic plant growing ponds ,  No outside nitrogen needed ,  100% close loop with all inputs controlled and monitored as an industrial process.

A very Large Engineering company  will be our EPCM contractor providing Process Engineering , Construction management and if needed will handle 100% of investment With guarantees,   they are a $6.5 Billion dollar company

Project has 3 sources of Income:

Reasons why no one has considered this process before:

Current Duckweed industry using Duckweed for sewage processing has never considered growing Duckweed organically without sewage because the fertilizer cost is too high and no established market.
The Organic protein market is growing at 22% per year with current winter shortages.


Today’s value of our protein meal is $1260.00 per ton, the 21 tons per day of protein meal production is really a byproduct of our Ethanol system with all cost being paid by ethanol sales
Posted by arclein at 12:00 AM