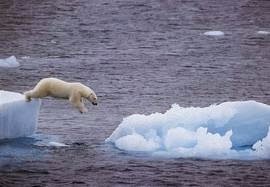 A curious item from a century ago in which notice is made of the plausible existence of a long cycle between the seasons impacting the two poles which certainly conforms to current experience.  Note the clear sailability of arctic waters during the medieval period.  The item suggests that this is an astronomical effect for which I know of no particular evidence unless everyone is missing something.

The cycle itself is centuries long and by that I mean around ten centuries.  I think that the driver is the circum polar current and an acceleration of cold water sinking into the deep in the South Atlantic.

The good news is that we are in the warm part for a good while.  However in five centuries all bets are off.

In the meantime they appear to have got it more right than wrong first time out.

Many scientific men have" endeavoured to explain the reasons of the great variations of climate in the prehistoric times. Very clever and interesting suppositions have been made to elucidate the matter. Some are based upon-facts lUte the secular change in the composition of the earth, by itself or by cataclysm some are established upon probabilities of variations from one time to another, in the of the constituents or elements of our 1 neighbouring planets.

The most modern and tyest theory is founded on the variable position of the earth in tbe course* of centuries towards the sun. This has been studied specially by Jean Reynaud in his celeibrated book "Ciel et Terre." Butnoonepf those three theories considered separately, or combined together, can fully answer the following question:—" Why, during the last geological period, the Arctic countries were suddenly frozen after very likely a large flood?" The fact that the.action was sudden is sufficiently proved t>v the preserved bodies of fossil animals found with flesh and hair, as, for instance, the preglacial elephant, called Mammoth, of which thousands and thousands are found in Siberia.

If the phenomenon had not been of a sudden character, we should find only the bones of them the other part would have been destroyed by putrefaction.

As said, the last theory is founded upon the variable, although regularly intermittent position, of the astronomical systems. It does not fully answer the above question about a prehistoric perturbation. Still, that theory is the best to explain the changes of climate in the historical times. The calculations made on this basis are corroborated by facts.

It is proved (says Jeanßeynaud)that 11,760 years B.C. the warm and the cold seasons, so far as the sun is concerned, had their maximum of difference in the Northern Hemisphere. Whence it follows that at that time everything favoured the formation of glaciers.The summers were short and extremely warm, the winters long and very cold. The quantity of caloric emanating from the sun is the same every summer, but its action for the melting of ice varies/when the skies are cloudy or not, consequently in several short summers the melting may be different.

On the contrary, the formation of ice increases annually if the winters are strongly cold, long and dark. The reverse of that state of things is found by calculations for the year 1122 A.D., and it is precisely at that time that we find the Danes and several Scandinavian nations going, through the Arctic open seas.

Colonies are established by them in the highest north latitude of Greenland, and the upper part of Nbrtll America, a long time before Christopher Columbus had reached a more southern part of the same continent. But those colonies were relinquished on account of the increasing cold. In the fourteenth century the seas are found again closed, even in the summer. The great north icefield (banquise) increases daily, the Arctic colonists are compelled to come more to the south, and the cold takes possession again of countries which were kept free for a few years just about the twelfth century. Remains of those upper Arctic villages are found, I may say, in each Arctic expedition. The ellmate of Iceland becoming more and more cool also proves that the state of the earth varies in the course of centuries, regularly in accordance with the above theory.

Of course, according to the reversed seasons of the Southern Hemisphere, we must find the reversed facts There again the theory is found correct. When Captain Cook followed in full the orders of the British Government, to sail along the south ice-field as close as possible, he could not.go lower than the 71st parallel, and ;he said to himself—" If there is any land i under that latitude, itwill remain eternally unknown, because the seas are closed and the dangers.are too great." This was said in 1773 and ITI4. Still, in 1823 Weddell, the English'seal-fisher, went to within 74deg 15min, where Joe found the seas open. James Ross and Dumont d'Urvllle have discovered since several antarctic lands far more southerly than was expected possible by Captain Cook. As far as New Zealand is concerned, we may say with great certainty that the country has been much cooler than it is now, and that for several centuries in future it will become warmer and warmer. The same theory seems to prove that all the attempts to reach the North Pole will be more and more doubtful. If a Pole Is reached, we may say with some reason that very likely the An tart ie Pole will be discovered before the North Pole, on account of the decreasing of the southern ice-field corresponding with the increase of that of the north.