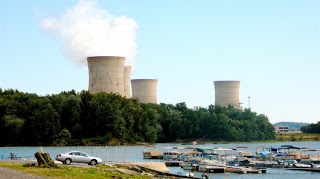 We are due to revisit the thorium question again. The bottom line has always been that if one were to have nuclear power, and weapons are not a consideration, then thorium is more productive and safer for several reasons, not least that it needs a separate system to provide neutrons.

Today we are actually at the end of the nuclear age if the emerging Focardi – Rossi reactor proves (see my posts) to be the heat engine it is billed to be.  Yet continuance of thorium work is well indicated as a system in place capable of consuming the large supply of nuclear materials presently in existence.  All of it is best consumed slowly in a thorium nuclear reactor to produce usable heat.  That includes both plutonium and uranium and all spent fuel rods.

Radiated materials are another matter as they are best stuck in a salt mine somewhere and generally forgotten about.

It is a reasonable engineering solution and likely supports additional production of medical isotopes.  It may even pay for itself even though it will have to operate for centuries to dispose of all the fuel produced to date.

The world's growing need for energy, the limits of our supply of fossil fuels and concern about the effects of carbon emissions on the environment have all prompted interest in the increased use of nuclear power. Yet the very word "nuclear" carries with it an association of fear. People are concerned about the waste produced by reactors, the possibility of catastrophic accidents as highlighted by recent events in and the link between nuclear power and nuclear weapons. Yet what if there existed a means of nuclear power generation with which these risks were drastically reduced?

The answer could be thorium - an element occurring as a silvery metal that's more abundant, cleaner and can produce more bang-per-buck in energy terms than uranium.

So how does thorium differ from uranium and plutonium, and why isn't it being used?

First, a quick run-down on how nuclear energy works.

What is nuclear power?

The word "nuclear" refers to the nucleus, or dense center of the atom. In a nuclear power reactor, these nuclei are split into smaller parts through a process known as fission. A sub-atomic particle known as a neutron strikes the nucleus of an atom of suitable fuel (particular isotopes of the heavy elements uranium and plutonium) breaking it into its component parts. Each fission results in the release of energy in the form of electromagnetic radiation and kinetic energy in the fragments of the split nucleus. This effect is twofold; the release of energy will produce heat, and the release of neutrons, which can in turn fission other atoms.

In material that has typically been employed as nuclear fuel, this reaction occurs in a "chain reaction" and is self-sustaining. When this is occurring, the reactor can be said to be"'critical". In a fission weapon, a mass of plutonium or uranium in excess of critical is assembled very quickly, with a flood of neutrons from a device known as an "initiator". The release of energy is extremely rapid and results in a massive explosion.

In a nuclear power reactor, the reaction is far slower and more controlled - the heat produced can be harnessed to boil water to spin turbines for the generation of electricity and this has been in practice for decades. The use of nuclear reactors for power generation began on 27 June 1954 at the Obninsk power plant in the former and has continued in numerous countries to this day.

There are of course, some significant problems with nuclear power. Fission reactions will always result in the production of radioactive waste products which require secure storage and pose a health risk to humans and the environment. There is the possibility that the operators may lose control of the fission chain reaction resulting in an accidental release of this material (often referred to as a "meltdown"). There's also the concern that reactors may also be used for the production of material suitable for nuclear weapons.

The two main types of reactors used for commercial power generation are the pressurized water reactor (PBR) and the boiling water reactor (BWR), which both typically make use of uranium in the form of uranium oxide fuel rods. The criticality of the reactor is managed by control rods, which when inserted absorb neutrons that would otherwise cause the chain reaction to continue. The reactor can be shut down, or "scrammed", by the rapid insertion of these control rods. However, this is a manual process and there is a possibility of an error occurring.

Criticality, fertility and the potential of thorium

The element thorium, named after the Norse god of thunder, may provide a safer alternative as a fuel. The key difference between thorium and other nuclear fuels is that it cannot sustain a chain reaction on its own. Fissile fuels like uranium and plutonium are able to sustain a chain-reaction, yet fission can also be achieved in material like thorium that is not fissile but fertile - i.e. it can produce fissile material, if neutrons are provided from an outside source.

Thorium is estimated to be three to four times more plentiful than uranium in the Earth's crust and has the advantage of being found in nature in the one isotope, which makes it suitable as a nuclear fuel as it need not be enriched to separate the right isotope. For convenience, thorium fuel can be used in the form of a liquid molten salt mixture.

Fission occurs in thorium when atoms absorb a neutron to become a heavier isotope and quickly decay into an isotope of the element protactinium and then an isotope of uranium, which is fissioned when struck by an additional neutron. The number of neutrons produced is not sufficient for a self-sustained chain reaction.

A particle accelerator could be used to provide the necessary neutrons for fission to occur in thorium and a nuclear reactor making use of such an outside neutron source would be known as an 'accelerator driven system' (ADS).

The notion of the ADS is credited to Carlo Rubbia of the European Organisation for Nuclear Research (CERN) joint winner of the 1984 Nobel Prize for Physics. The ADS would likely be far smaller than other reactors and if the accelerator were to be turned off, the nuclear reaction would cease, although it should be noted that even in a reactor which is not critical, the heat from the decay of materials can be significant and cooling is required.

In a thorium reactor, quantities of other fuels could be included, without the fuel being capable of sustaining a chain reaction, and thus the reactor could be used to provide energy from disposing of material such as plutonium from disassembled nuclear weapons. It's also possible to ensure that the reactors are designed in such a way that it is not possible to extract fissile material, which can be used to manufacture nuclear weapons.

Though all nuclear reactors will produce waste products, a reactor fulled by thorium will produce far less long-lived waste products than one fueled by uranium or plutonium, with waste decaying to the same level of radioactivity as coal ashes after 500 years.

"Two hundred tonnes of uranium can give you the same amount of energy you can get from one tonne of thorium," Rubbia told the BBC News in a recent interview.

Towards a thorium reactor

Though several reactors have made use of thorium for experimental purposes, a thorium power reactor is not as yet a reality. Countries like , and are looking at the use of thorium and such a reactor may one day soon be a viable energy source.

So why has it taken so long for thorium to hit the nuclear power agenda? The key reason seems to be that because it can't be used to make a nuclear bomb, it was largely ignored during the project and in the development of nuclear power stations that followed.

It's not thorium alone that is the key. The liquid fuel form provides the real benefits -- energy cheaper than from coal.

The liquid fluoride thorium reactor uses molten salt as the fuel vehicle, coolant, and reactivity control. Learn more about the technology and social benefits at